Heart Rate being normal when under treatment for the bends

When you surface from diving too quickly; you get "bends" - these are caused by gas bubbles forming in your lungs (especially nitrogen). This causes breathing problems if not treated since the bubbles are essentially blocking oxygen transport.

For treatment, you have to be in a hyperbaric chamber for several hours.

Why is it you don't get nitrogen and carbon dioxide bubbles in your bloodstream while being treated? I would think that in the machine the nitrogen, carbon dioxide and water concentrations would rise causing you to start having signs of low oxygen like loss of brain function.

As I stated previously, nitrogen bubbles block oxygen transport and thus carbon dioxide transport. Since there is nowhere else to go, it goes into the bloodstream where oxygenated blood is supposed to be. This is detected by the chemoreceptors in your arteries; this then tells the heart to beat faster in attempts to rid the body of CO2. Once again; however, this doesn't happen because now there are more nitrogen bubbles from breathing in more nitrogen and water. This leads to a progressively higher heart rate (Ventricular Tachycardia - V-tach) which is dangerous as it can lead to MI (Myocardial Infarction) symptoms - like chest pain. Ventricular tachycardia that lasts a maximum of a few minutes can then lead to V-fib (Ventricular Fibrillation) which, if not treated with epinephrine or defibrillation on time, will lead to asystole and death.

When someone has the bends and is being treated in a hyperbaric chamber; how do they not end up having an acute MI (due to accumulation of nitrogen gas in the bloodstream)?

You are wrong on several accounts:

What happens when diving:

During deep sea diving the pressure surrounding a person increases at the rate of 1 atm (atmospheric pressure) for every 10 m in sea water and 10.3 m in fresh water. This relation is linear.

The pressure inside the body equalises with the pressure outside to prevent any deformation. The solid and liquid components of the body can withstand pressures upto 151 atm (depth of 1.5 km underwater) without undergoing any noticeable compression. But air, being extremely compressible undergoes compression.

So at 2 atmospheric pressure the space occupied by the air in our body is halved. This would shrink the lungs to half the total volume. To circumvent this the divers breathe air compressed at the same pressure as the water pressure around them, so that the pressure gradient across the chest wall is normal.

This law states that the Barometric Pressure is the sum of the partial pressures of the individual gases in the air mixture.

In air at 1 atmospheric pressure (760 mm Hg) the partial pressures of various gases are:

The gas exchange in the lungs is based on partial pressure of the gases. Thus due to increased partial pressure, the amount of gases dissolved in blood increases (This increase is proportionate to the pressure levels). 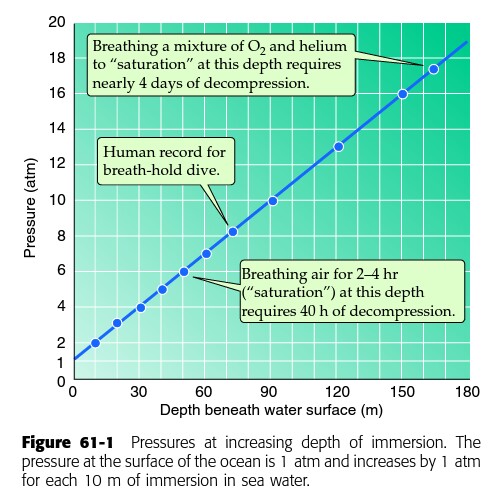 During a extended dive (one lasting several hours) the body tissues gradually equilibriate with the high-pressure gases. At sea level our body contains 1 L of dissolved nitrogen, equally distributed between body's water and fat. As partial pressure of Nitrogen rises, the nitrogen equilibriates with the body's lipid stores because adipose tissue is relatively underperfused.

Once equilibrium is achieved the volume of nitrogen dissolved in tissues is proportional to the alveolar partial pressure of nitrogen. Thus at 4 atm the body will contain 4 L of nitrogen.

The same principle applies to oxygen as well, though the solubility of oxygen and the speed at which equilibrium is attained are different.

During ascent from the depths, the Barometric Pressure (surrounding pressure Pb) falls. As the Pb falls the pressure inside the alveoli fall as well. This causes a fall in the partial pressures of all gases in the lungs creating a gradient of gases from the tissues to the alveoli.

So the diver has to ascend slowly to give enough time for the gases to move into blood from the tissues and then get washed out. If the ascent is too rapid, gases dissolved in the tissues - due to high pressure - attains the gaseous form (due to pressure drop) and become bubbles. This is similar to opening a pressurised coke can where one can observe gas bubbles forming.

The bubbles are the reason for the bends. Bubbles can also cause serious problems like arterial gas embolisation, CNS disorders (due to formation of bubbles in the myelin sheath of axons which compromise nerve conduction), pulmonary symptoms (due to pulmonary emboli), sometimes even Disseminated Intravascular Coagulation.

The decompression is done in stages - in which the divers spend various amount of time at various under water levels to allow complete diffusion of dissolved gases into blood and into the alveoli which is consequently breathed out. 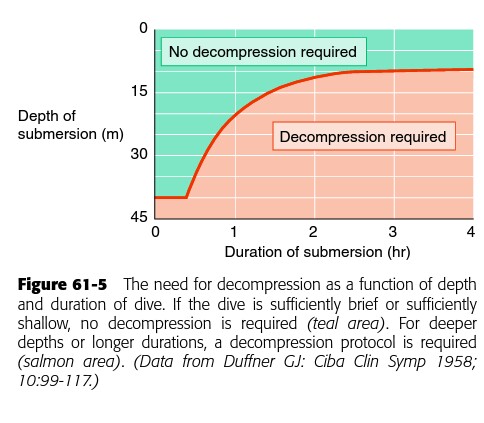 The hyperbaric chamber is used when the above solution is not applied i.e. the diver has surfaced rapidly without spending sufficient time at various levels to allow proper decompression.

In a hyperbaric chamber the diver is recompressed to the pressures equal to the pressure experienced at the level to which the diver dived. Due to the increase in pressure, the bubbles get dissolved again. This instantly relieves many symptoms - like the nerve conduction delay, bends, niggles etc... Now the decompression is carried out by under controlled environment, simulating the various intervals the diver has to stay at various pressure levels under water.

Hope this explains your doubt.

Not the answer you're looking for? Browse other questions tagged cardiology breathing lungs or ask your own question.