How does this illusion work?

I found this image on Google+ 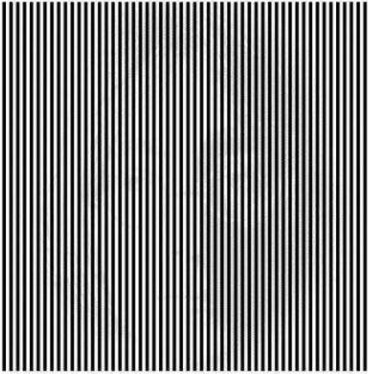 If you shake your head you can see a portrait of a person. Can anyone explain how the image is constructed in the brain?

If you zoom in on the image, you can see that it is not just composed of black vertical lines, but also has pixels with different gray tones in the white areas. When you move your head sideways, you perceive the gray tones more.

If you were to remove the black lines, you could see the face clearly. Initially I thought that by blurring the gray shapes when your head moved, they became more visible as they seemed larger. On reflection though I think that actually what's happening is that the high contrast between the black lines and the mostly white background causes your perception to adjust so it doesn't easily see the mid tones. This is because we have a low dynamic range in our vision (relative to absolute brightness, but compared to camera CCDs we have a high dynamic range) - we have to adjust the light sensitivity to compensate for the overall brightness of the image. This is called brightness adaptation. There's a good free textbook for further reading about this at Utah U's Webvision.

By reducing the brightness you can see the faint image in the background much more clearly... 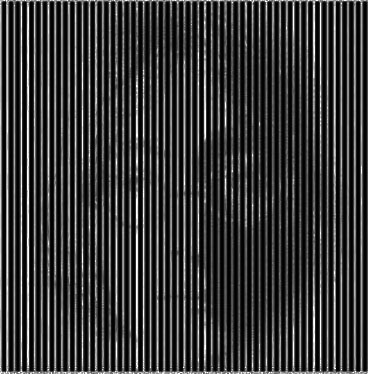 12
Why does this illusion work?

12
Why does this illusion work?
42
If the brain has no pain receptors, how come you can get a headache?
11
What are the "stars" we see after a bump on the head?
3
Ventral stream pathway and architecture proposed by Poggio's group
0
How does a smoker's pleasure work?
2
How are the images of both eyes combined to form one image?