How does beta branching stop alpha helices from forming?

I am told that beta branching interferes with alpha helix formation.

Problem is that I don't see how beta branching has anything to do with alpha-helix formation. Beta-branches are on the outside of alpha helices and internal hydrogen bonding holds the helix together.

The answer to this, as said by @canadianer in comment, is that beta branched amino acids are bulky and can sterically clash with neighbouring atoms, forcing the backbone to adopt torsion angles which don't favour helix formation.

I couldn't find reference for these exact words, but similar one here:

amino acids such as Valine, Isoleucine, and Threonine all have branching at the beta carbon, this will cause steric clashes in an alpha helix arrangement... valine, threonine, and isoleucine will often destabilize the helix because of branching of the beta carbon. These three amino acid residues are more often found in beta-pleated sheets, where their side chains will lie in a separate plane than the main chain. 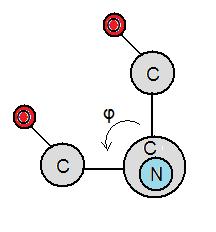 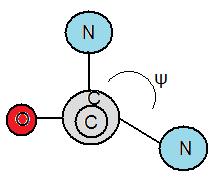 See this table for details of which amino acid prefers which configuration: 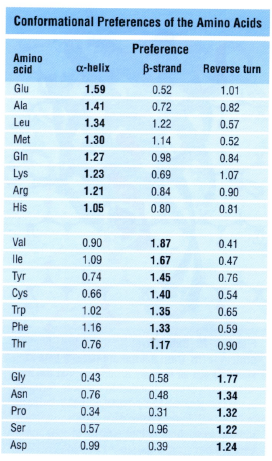 5
Are there any primary structure sequences that strongly suggest b-sheet or alpha helix?

1
Creative ways to deactivate alpha-amylase taken from fungi
4
Classification of glycosidic anomeric bonds (alpha vs. beta)
3
Why do some proteins "use" a beta barrel structure instead of alpha helices in transmembrane space?
0
Is it possible to stop yourself from going into shock?
7
Starch vs Cellulose. What are the differences between Alpha and Beta glucose ring structure in them?
0
Beta Sheets vs Alpha Helix - Strength
1
How can I calculate alpha helix content from molar ellipticity?