Why are the fertility rates of large predators kept low?

This question can be tackled in several ways, and also seems to contain a couple of misconceptions about ecological processes (e.g. problematic group-selection ideas and how species 'fit' into the ecosystem). However, I think it is most usefully answered from the perspective of life history theory and the evolution of life histories (see e.g. Roff, 2002 and Fabian & Flatt, 2012 for background), and at its core this question is dealing with tradeoffs between e.g. fecundity and mortality.

All organisms act under a limited energy budget, and when they spend energy on some activities that will limit what they can spend on other activities. This lies at the core of life history tradeoffs. If organisms use resources to produce or raise offspring, this can therefore have consequences on growth, maintenance (e.g. disease resistance), predator avoidance and many other traits and behaviours, which all affect fitness.

With regard to your question, there is a well-known tradeoff between survival and fecundity (an intraindividual effect), which has been shown both between individuals within species and across species. As with almost all species traits, there is also variability between individuals within populations, so that some have higher fecundity than others, but may then also suffer lower adult survival rates (maybe under certain environmental conditions). Therefore, there are certainly already "mutation(s) that increases fertility among the predators" within populations. The reason that fertility is not continuously increasing over time, is that this would have negative fitness consequences overall. So the reason that the (average) life history traits within a particular species are what they are, is that they are the result of the evolutionary pressures that the species have been experiencing over evolutionary timeframes, acting on the entire life history.

To be sure, hypothetical mutations/changes in life history traits that would increase fecundity with no negative tradeoffs whatsoever for either parents or offspring (i.e. no negative fitness consequences) would definitely increase in frequency. From the perspective of life history theory, everything else equal, selection will maximize the survival function, $l(x)$ (survival to age x) and the reproductive function, $m(x)$ (number of offspring at age x), while minimizing maturation age. However, tradeoffs between these functions (directly or indirectly) and between generations will prevent these from being optimized one by one.

Population growth in long-lived predator species is usually also very sensitive to changes in adult survival rate (Caswell, 2001). This result comes from analysing stage or age structured population models, and is the result of a life history strategy with high adult survival rates, fairly high age of maturation and relatively low fecundity. To increase fecundity in this situation with negative effects on adult survival will risk adult death and therefore loss of many future years of reproduction. These kinds of results and models are often used to identify which life history traits and stages to target in conservation actions, but can also be used to understand evolutionary processes, since population growth rate can be used as an overall measure of fitness.

It should also be added that many other ecological processes must be considered. For instance, large predators often care for their young for quite a long time, since their hunting/foraging behaviours are complex, and it takes a long time for young to learn how to hunt successfully by themselves. This means that adults need to bear not only the direct cost of producing offspring, but also to support them until they are self-sufficient. For an extreme case, look at the Orangutan (not a predator, but still) where the young stay with their mother and nurse for up to 5-6 years (sometimes more). To increase fecundity in such a situation will put a large strain on adult mothers. You also need to consider trade-offs between offspring number and offspring "quality", which have been demonstrated in many species (an intergenerational effect). This means that an increase in fertility can result in lower offspring survival over longer timeframes, with overall negative effects on fitness.

Finally, life history evolution is a large and complex field, and these are just a couple of examples and suggestions for why the situation isn't as simple as your question makes it out to be. Environmental variability and the predictability of the environment are other factors that I haven't considered at all, but are both important processes when you try to understand life history evolution. This question can also be approached from a more theoretical perspective, but without a background in life-history evolution I think it is more useful to start reading about different processes and tradeoffs, and then later if you are interested to go into the theory for a deeper understanding.

The way you pose the question, as in what mechanisms limit the fertility of predators, together with your comment about the distinction to the population dynamic aspect, strongly that what you are thinking about an adaptional mechanism here and asking about its characteristics, right?

In that case, this is very similar to the kind of scenarios you find in the group selection arguments: It is better for the species to limit it's fertility rate, thus a limit on the fertility rate will evolve.

This simplified view on group selection is heavily criticized as it's not a ESS: As you pointed our yourself, a mutation that would increase the fertility rate would quickly spread.

But this is assuming that an increased fertility rate actually would be beneficial. And what we forget here is that we have an inherent balance of quality of offspring versus number of offspring: r/K selection. The view that evolution constantly strives to produce increasingly ferocious eating and breeding machines is obviously too simplified if we were to just take a look at the how the biosphere actually looks like and compare it to our imagination how it could be like.

So basically, we could assume that the local "mechanism" here is simply r/K selection, with the population dynamics providing a major influence of the overall dynamics behind the scenes.

However, group selection do have an influence in the general evolutionary dynamics, as even the otherwise avid opponent Richard Dawkins agrees upon, but this is under the condition that group selection really is active natural selection of distinctive groups, and not some omniscient mechanism that somehow makes groups inherently develop traits that is beneficial to the group.

And the other conditions like ESS still have to be valid here as well: If a trait could be positively selected for by group selection, it has to 1. Be developed before any selection can act on it and 2. Stay a ESS for it to persist (unless the group selection pressure is very high, and I think it's generally assumed that it's many orders of magnitude less influential than selection within groups)

I could imagine the possibility that group selection somehow has had an influence in limiting the genetic pool of top predators to the kind that uses a this r/K strategy that we see today but here I digress, it's not needed to explain the fertility rate of the top predators we see today.

probably isn't true if there are tradeoffs involved. It also wouldn't be true if the increased death rates due to overpopulation, were concentrated more heavily on the over-breeders and their descendants than on the rest of the population. (This could happen due to spatial structure; for example, if each predator hunted and raised their offspring in their own patch of territory.)

Tradeoffs are the bread and butter of Life History Evolution. ("Life History Traits" are the traits which are most directly related to fitness: age-specific mortality rates, age-specific fecundity rates, age of maturity, etc. Size is an honorary life history trait, as is offspring size, since these often have strong effects on mortality and fecundity.)

One of the most famous examples from the early days of Life History Theory is the Lack Clutch. The ornithologist David Lack noticed that birds never laid as many eggs as they were capable of producing, and wondered why. He proposed that there was a tradeoff between the number of offspring, and the survival of each of the offspring. He suggested that clutch size was designed to maximize the number of offspring who would survive to the age of fledging, and that this would be an intermediate optimum.$^1$ 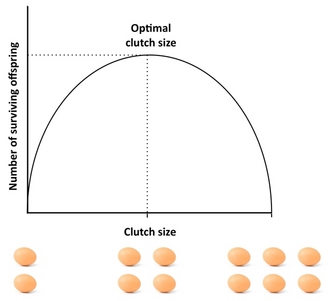 Lack was right that the most fit clutch size would be intermediate. In detail, clutches are usually a little smaller than he predicted, because there are additional tradeoffs he didn't consider.

Here's a partial list of tradeoffs that are often thought to be important.

(Tradeoffs are often modeled as limiting-resource allocation problems, but this isn't the only sort of tradeoff. A tradeoff occurs whenever getting more of one good thing requires getting less of a different good thing [or more of a bad thing], for whatever reason.)

So much for life history tradeoffs in general. But, in the face of these tradeoffs (and whatever other constraints), which can have different strengths and different shapes etc., different species hit on different strategies. Why? What leads to the large predator life history being optimal for large predators? I don't know. I don't even know if it is known! Life History Evolution is complicated, with many different traits coevolving together. It's hard to model more than a few of these (holding the others constant) at a time. I don't know if anyone's actually explained the conditions that would lead to an entire suite of life history traits, from scratch. (Once upon a time, attempts would have been made to try and explain the large predator life history as one end of the r-selection vs. K-selection spectrum. But that paradigm has fallen out of favour among researchers.$^6$)

Here's another factor, elaborating on the first tradeoff, which I think is probably relevant.

If there are too many predators, then there won't be enough prey, and the average death rate will soon catch up. If this food-shortage cost were applied to every member of the predator population equally, then a mutation for increased fecundity would indeed be favoured: although all members shared the cost (increased mortality), only the mutant would get the benefit (increased fertility); on average the mutant would be fitter and the mutation would spread. (This is ignoring the other costs, such as slower parental growth and faster parental aging.)

But now suppose that you are a predator, and you own a patch of territory; and whether you over- or under-hunt mostly affects your territory. Suppose also that you care for your offspring, or at least let them share the hunting in your territory, rather than sending them elsewhere. Then over-breeding will lead to over-hunting in your territory (or, to hunting the same amount but having lower-quality offspring). But the other territories'll be fine! The brunt of the mortality cost of over-breeding and over-hunting, as well as the fertility benefit, will fall on you and your offspring.

tl;dr: if conditions (eg. due to the population's being spatially structured) are such that the mortality cost of higher fertility applies more strongly to the over-breeders than to the rest of the population, then there will be selection against over-breeding. In addition to costs of overpopulation, higher fertility can also negatively affect the parent's fitness in other ways; for example, by using up resources that they would have used for self-maintenance, or resources that they would have used for growth.

Not the answer you're looking for? Browse other questions tagged evolution ecology population-dynamics life-history predation or ask your own question.

26
What prevents predator overpopulation?
0
Would it be more genetically efficient to have shorter lifespans?