Are there U-rich transcriptional pause sites?

I've heard a statement in a talk that U-rich sequences cause transcriptional pausing. The intuitive explanation for this was that the UTP concentration is lower in the cell than the ATP concentration. Reducing the concentration of an educt obviously reduces the reaction rate, leading to pausing of the RNA polymerase.

After reading up on transcriptional pausing, I haven't found any literature that shares this view. The recent papers I found don't show U-rich sequences and have completely different explanations on how pausing works. Those explanations mainly concern interactions at the edges of the transcription bubble.

Now, I guess that there might be multiple mechanisms of transcriptional pausing. But I couldn't find any references in the literature to U-rich pause sites and how they could work. Is there any literature on this? Either on the fact that U-rich sequences tend to be pause sites, or that the concentration difference in NTPs leads to pausing at certain sites.

Yes, there are: this is a feature of bacterial intrinsic termination. The mechanism of pausing is not as you describe, though. In bacterial transcription, two forms of termination are recognised (to my knowledge):

If you were reading up on transcription in eukaryotes, or were reading about rho-dependent termination, that would explain why you found no mention of polyU tracts. When evolution provides many solutions to a problem, it can get tricky to keep on top of it all!

This lists a few types of termination, including attenuation which is fascinating, and does involve regulation dependent on the concentration of a substrate.

A palindromic sequence situated just before the termination site causes a hairpin to form in the nascent RNA inside the exit channel of RNA polymerase, if given time (and if anti-termination factors do not bind the RNA to suppress hairpin formation). It appears that formation of this hairpin "destabilises the elongation complex [RNA polymerase + elongation factors]", and is an irreversible step towards collapse of the transcription bubble and dissociation of the transcription machinery.

The polyU tract (~8nt long) proceeding the hairpin seems to have dual function: the A:U basepairing in the DNA:RNA hybrid is weak; the hybrid becomes less favourable. Since the hairpin (which is an RNA:RNA duplex) is adjacent to the RNA:DNA hybrid duplex in the bubble, they experience competition for formation. Weakening the hybrid duplex favours hairpin formation, which acts like a switch that separates most of the RNA:DNA duplex in the bubble - synthesis cannot proceed, and the unstable complex dissociates.

Also, the ployU seems to be responsible for pausing which allows time for the hairpin to form, but not for the reason you suggest:

The concentration of UTP in the cell is not unusually low. ATP concentrations are higher than other ribonucleotides since it is the cell's major 'energy currency', quite apart from nucleic acid synthesis. Hence I don't believe pausing can be explained as the polymerase waiting for UTP. The polyU tract probably acts as a 'back-tracking signal' to the polymerase, since the hybrid duplex in the catalytic site is weakened, and the repeated nature may be "slippery"(?). This back-tracking pauses the polymerase. 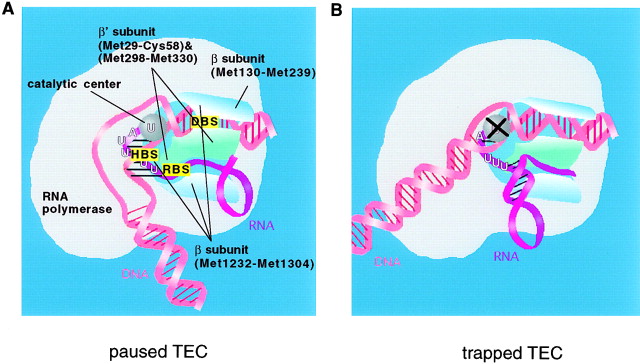 To summarise: The elongation complex passes the palindrome and reaches the polyU tract, where the hybrid duplex in the bubble is weak and tends to cause back-tracking/pausing. This allows time for the hairpin to form in the exit channel, which both unwinds the hybrid duplex further, and destabilises the elongation complex. The transcriptional machinery is now destined to dissociate and the bubble collapse: RNA is released from the DNA duplex.

Rho is a hexameric protein complex that is loaded on to the nascent RNA at a loading sequence. It hydrolyses ATP to move along the emerging RNA - apparently it "races" with the polymerase, and when it catches up to the polymerase, it causes termination. There are pause sites in the RNA which allow rho to catch up - these sites tend to be rich in A and U, so perhaps polymerase is slowed by destabilisation of the hybrid duplex - but it is nothing like the intrinsic terminator, since it depends completely on rho for termination. 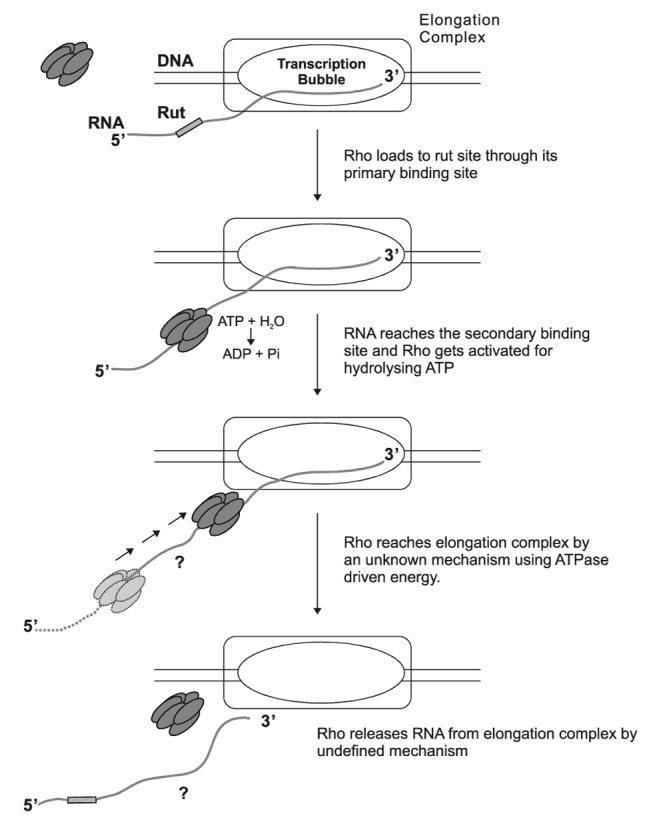 Not the answer you're looking for? Browse other questions tagged biochemistry transcription polymerase or ask your own question.