Why do human eyes glow red on a photo and dog's eyes green?

I know that cameras sometimes come with an anti "red eye" functionality that involves two flashes, presumably the second flash coincides with the shutter opening.

Why do camera flashes sometimes lead to photos of humans with red eyes? And why do dog's eyes appear green?

The reason for the green dog's eyes has been answered quite shortly under the question "why-do-dogs-eyes-glow-green-on-a-photo", but that question does not answer my specific question: Why do humans have red eyes on flashed photos and why are dog's eyes green?

Short answer
In humans it is basically the red choroid plexus in the back of the eye you are seeing on a flashed photo, while it is the green-reflecting tapetum lucidum in dogs.

Background
The red-eye effect in humans was explained nicely by Yale Scientific Magazine, and I adapted the following text from that source:

The human eye can effectively adjust to different light conditions, but this adaptation is also what leads to the red-eye effect. The eye regulates the amount of entering light by contracting or expanding the pupil. At night, your pupils will accordingly enlarge to extract more light from their surroundings. However, this dilation also leaves your eyes unprepared for the sudden burst of light from a camera flash.

When light from the flash enters your eyes under these conditions, your pupils are unable to contract fast enough (full constriction takes a few seconds) to prevent the light from reflecting back, off of the red blood vessels of the choroid. The choroid plexus nourishes the retina, and therefore contains ample blood supply. As a result, the camera will pick up the red reflection, resulting in the red-eye effect. Interestingly, due to their increased “dark adaptation,” children more commonly have red eyes in photographs.

The amount of melanin, a light-absorbing pigment in the eye, also has a role in the red-eye effect. Individuals with lower levels of melanin will absorb less and thus reflect more light, explaining the high incidence of the red-eye effect in albinos.

Though the cause of this effect is wired in the biology of the eye, some cameras can reduce red-eye by sending a few preliminary flashes before the final flash to give the pupils enough time to contract and adapt to the increased-light conditions. Another way to reduce the effect is to avoid looking directly into the camera lens, which will reduce the reflection of light. Finally, if all else fails, modern image editing software, such as Photoshop, can remove the red discoloration.

With regard to why dogs and other animals may not have red-eyes but other colors, this was indeed answered in your linked question: some animal species have a tapetum lucidum, which is situated in front of the choroid and reflects light back onto the retina thereby increasing light sensitivity. In dogs it is green, as aptly shown in the linked question's answer. The following figure shows the anatomy and the position of the tapetum in front of the choroid. It was adapted from Pets.SE with the related question "Should I be concerned that my dog's right eye is reflecting green in the dark when his left eye doesn't?" 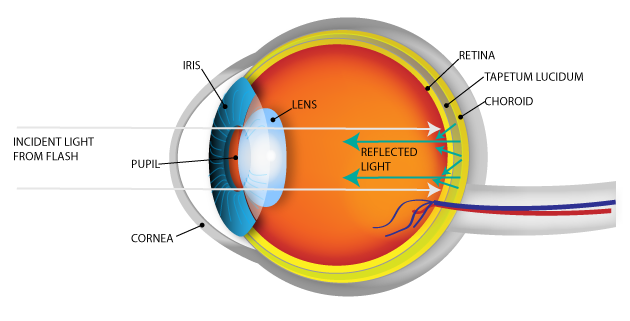 Hence, the reason why animals with a tapetum lucidum have another eye color is that light does not reach the choroid in these species, giving rise to green-eye effects in dogs and cats (picture taken from Ask Nature):

Not the answer you're looking for? Browse other questions tagged eyes human-eye light dogs or ask your own question.

16
Why do dog's eyes glow green on a photo?
3
Why are fingerprints different even in identical twins?

2
Why do I always close my eyes when someone takes a photo of me using a flash?
16
Why do dog's eyes glow green on a photo?
7
Why do we get 'bags under our eyes'?
2
Why do eyes water in response to particular emotions?
7
Why can't we half-close our eyes?
1
Can Green color give Rest to Eyes?
0
Would green light look different if blue and red cones were deactivated