How can Valonia ventricosa cells get so big?

Valonia ventricosa are single-celled algae that range between one and few centimetres. In rare cases, they can reach sizes exceeding 5cm. They range from grass-green to dark green, and some are even a blackish colour. 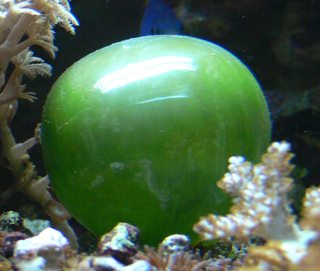 Weirdly, a lot of the literature covering these organisms seems to be pre-1950. This X-ray crystallography project in 1937 identified key structures in the cell wall of V. ventricosa:

It is found to consist of layers in which the cellulose chains in any one layer are inclined to those in the preceding and subsequent layers at an angle which is on the average rather less than a right angle.

The two sets of striations on the layers of the wall correspond closely to the meridian and spiral directions of cellulose chains, while the extinction directions, being defined both by the directions and by the relative proportions of the two sets of cellulose chains, lie in variable positions between. The development of the rhizoids has been investigated and found to be associated with regions of the wall adjacent to the poles of the spiral.

Although the authors hesitate to speculate on their function, has any progress in the field suggested the fibres identified in this 1948 Nature paper be involved in sustaining such a massive cell (Figure below)? 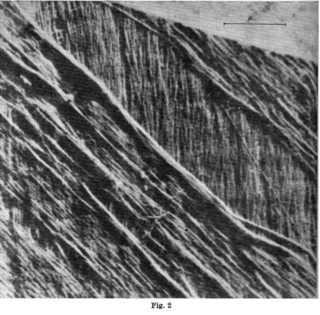 So it seems like the cell wall structure has been categorised long ago. But what allows these single-celled organisms to get so big? Is it the plant-like cell wall, or something else? I was under the impression that cells would burst or collapse well before reaching this size.

Ventricaria ventricosa (previously called Valonia ventricosa) is not exactly a single cell. It has a coenocytic structure with multiple nuclei and chloroplasts. As Jasand Pruski correctly guessed the organism possesses a large central vacuole which is multilobular in structure (lobules radiating from a central spheroid region).

The entire cell contains several "cytoplasmic domains" with each domain having a nucleus and a few chloroplasts (See the figure below). Cytoplasmic domains are interconnected by cytoplasmic "bridges" that are supported by microtubules (like in axons). The peripheral cytoplasm (whose membrane is overlaid by the cell wall), is only about 40nm thick. 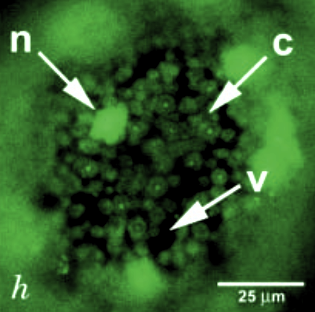 Fluorescent confocal micrograph of a cytoplasmic domain. From Shepherd et al. (2004) Protoplasma 223: 79–91. Here, n is nucleus c is chloroplast and v is vacuole.

So these are not huge cellular balloons that can burst easily. Nonetheless a huge structure like this is susceptible to injuries by shearing forces of water currents and by other organisms like fish which may try to feed on them. These organisms have some mechanisms other than the cytoplasmic organization that allows them to cope up with injuries:

Other organisms like this (siphonous algae) also have similar mechanisms. Some even employ calcium carbonate to maintain rigidity.

Not the answer you're looking for? Browse other questions tagged cell-biology botany microbiology plant-physiology structural-biology or ask your own question.

9
How can a monocot get so massive?
20
Can plants get cancer?
3
How do nutrients get to the cells they need to get to?
4
How many cells are there in the apical meristematic tissue?
5
How do single-celled predators chase other cells?
4
How do plants get carbon?
3
Can some prokaryotic cells be larger than eukaryotic cells?
3
Ferns: How big can a circular sorus be?
7
How does the Endoplasmic Reticulum scale with Cell Volume in Epithelial Cells?