Do animals exist which have good vision, but see only grayscale?

In computer vision the color information is often discarded, as most object recognition tasks seem to work just as well on the greyscale image (even better, because there is less unnecessary information).

Do animals exist which have good vision (e.g. see sharp, many details), but only see greyscale / very limited colors?

This is a rather unsatisfying answer I'm afraid. I can't seem to find any animal that has exceptional eyesight and sees in monochrome.

Baring in mind the context of humans vs machines; machines cope better with shapes rather than colours however it generally appears that those animals which rely on exceptional eyesight to survive tend to see in colour and have other neurological systems to ease "data overload".

Animals that see in grey-scale.

Some pinnipeds (seals) see in grey-scale, but note that their survival doesn't seem to depend on visibility, and it is generally regarded as poor even in a typically healthy animal. According to SeaWorld, researchers have found blind seal mothers and pups that are otherwise perfectly healthy.

Dolphins are a similar story. It is so murky that they rely on bio-sonar. Fresh water dolphins are almost completely blind.

In fact, the more species that I have read about which have monochromatic vision, the more I see that these animals rely heavily on other senses.

Note that these often have another much more acute sense like smell or hearing.

Many species, such as all marine mammals, the owl monkey, and the Australian sea lion have monochromatic vision under normal conditions...

A trend I see is that animals that have exceptional eyesight tend to have also evolved some sort of colour differentiation.

Why not ditch the colour info to make it easier on the brain?

To bring this back to your context of machines I would say that identifying the difference between a ball, a chair, a human, and a car (the sort of things machines need to know about!) is much more dependent on shape than colour. A monochromatic person wouldn't struggle with that at all.

However in a "wild" environment telling the difference between grass and tiger stripes means that an animal with trichromatic vision may get to live another day whereas the animal with monochromatic vision might not see the tiger in time. Or spotting berries and fruit in some distant trees might mean food that would have otherwise gone unnoticed.

Those are obviously very narrow examples, but generally it seems animals always have one or more exceptional senses limited to smell, hearing, or colour vision (it would be great if someone could point out an exception to this in the comments, like touch or taste!).

You are right to hint that there is a lot of information in colour vision. Like your example with loss of colour in machines, data needs to be dumped very quickly in the human brain.

I'm not a neuroscientist, but I have read pop articles about how little we can remember with photo detail. Within seconds of looking at a scene all texture details are lost, most objects are forgotten about and all we can really recall are big shapes. But importantly, we would notice the tiger in the woods before forgetting and run for it! If we had no colour input, that wouldn't be the case.

Examples of more colour being used.

Hopefully the above demonstrates that colours are important to many animals. If anything it seems that more colours even than our perception of the EM spectrum are preferable, particularly into the UV range.

For prey identification reindeer rely on ultraviolet light to spot lichens that they eat. This same sight can spot the UV-absorbent urine of predators. This article has a few more examples.

Some birds of paradise like parrots have even more brilliant patters under UV light. Even starlings look to have an identifying pattern under UV light. Both those examples are thought to be involved in mate selection. 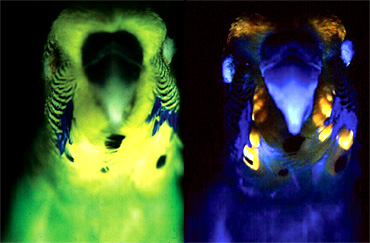 White light does not reveal the feathers' yellow fluorescence in images (left), but short wavelength illumination does (right). Photo: Science

This all hammers home that colour is more important to animals than machines and is involved in more than just camouflage.

Most marine mammals, some nocturnal mammals, and some fossorial mammals are monochromats -- meaning they see in what is effectively greyscale. As previous commentators have mentioned, quantifying visual acuity is not a trivial matter. Still, I'd assume that under many measures a species such as the owl monkey--a monochromat--has quite good vision, at least at night.

Not the answer you're looking for? Browse other questions tagged zoology vision sensation or ask your own question.