This creature was found on a bed. At first, I thought it was a piece of lint, but then it suddenly moved. I picked it up in a paper towel and put it in an eye cream containers, which it is currently in. I believe this means that it is pretty strong, since it appeared to have pulled itself all the way up from the floor, to the top of the bed, then across to the other side of a King-sized mattress.

It appears to be a worm wrapped in a cocoon. It is pretty short, being small enough to fit inside an eye cream container.

The creature is a pale yellow-white/cream, with brownish-red tips on each end (unless it can somehow turn around without exiting its casing). It looks from the side as if it has a rather flat face, one that comes to a slight bump at the bottom, but is pretty much flat. The casing is light grey, with some small portions that appear to be almost the same color as the organism, just slightly darker. There is an opening at each end of the casing, which the organism uses to slide slightly out. It has never fully come out of the casing. The edges of the openings at each end are white. The casing seems to either be made out of or covered in dust.

It can create a substance that is sticky and strong enough to support its weight. I cannot tell if the substance is created by the 'worm', or the 'cocoon'. A thread at each end of the casing is connected to the side of the container by the substance. When I accidentally detached one end of the casing, the entire thing began to shake violently when held so that one end was hanging. It wouldn't stop until I had turned it so that both ends were touching the side of the container. Within minutes, though, it had reattached the broken end. Minutes. Not hours, but one minute.

The holes at each end of the cocoon can either grow or shrink closed. I believe this allows us to tell which opening is in use. If it is nearly shut, it will come out the other end.

It appears to be nocturnal, since it doesn't move during the day, but it is very active at night. It also appears to react to light. If some is put on it, it will poke out to look around.

It has survived for four days straight without food, as far as we know. We put a small piece of lettuce in with it. However, there are two small, brownish things on the bottom of the container. This may be its excrement.

The creature moves by reaching out with its 'tentacle/worm', grabbing onto something (including the ground), and pulling itself forward.

I cannot tell if the creature is attaching to the container's side to climb, or because it is morphing. If that is the case, then the outer shell may be a cocoon. It did detach itself from the side of the container, and first hid under a ledge of lettuce, but now has wrapped itself in lettuce.

To summarize: can someone please help me identify this creature? 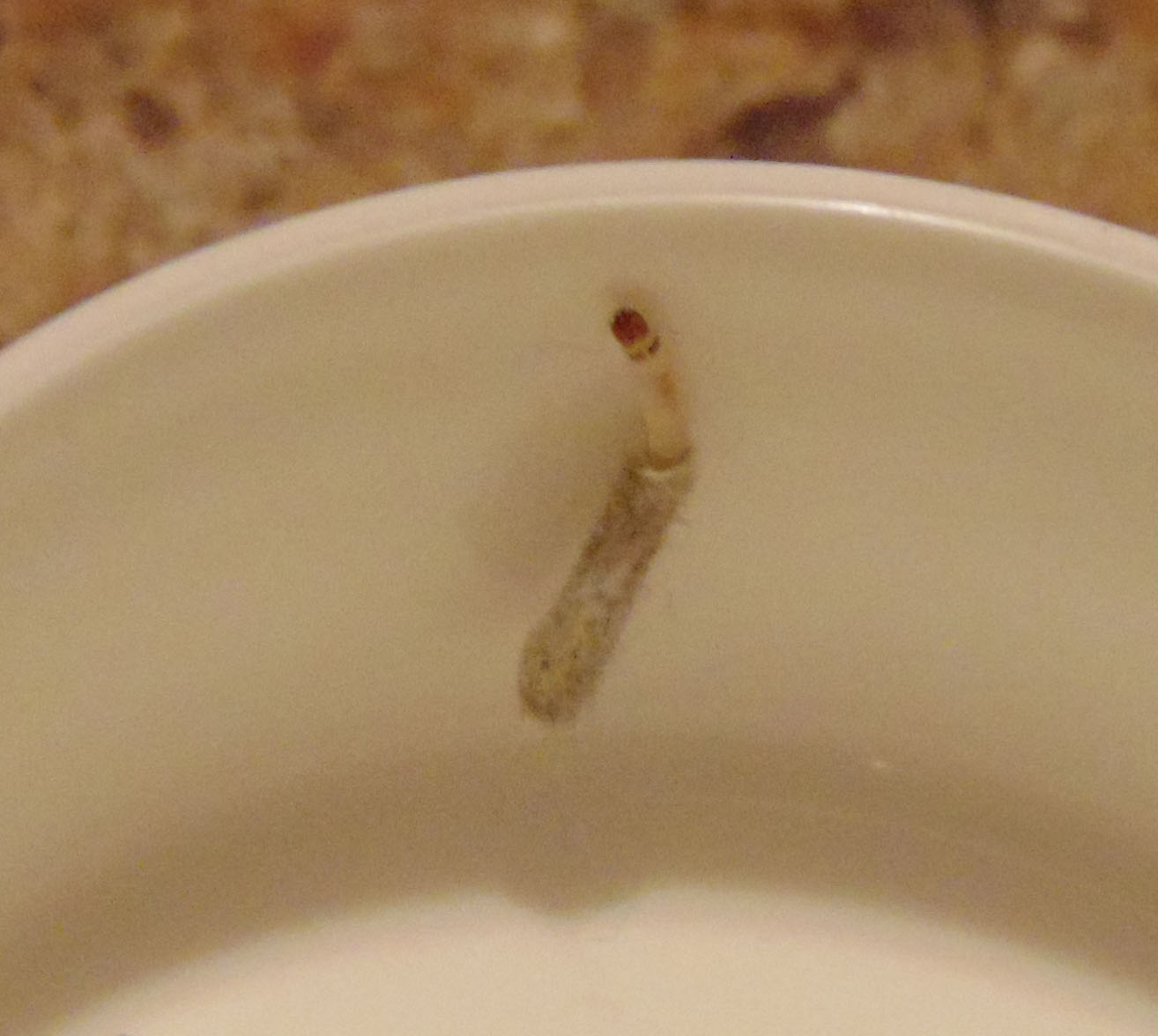 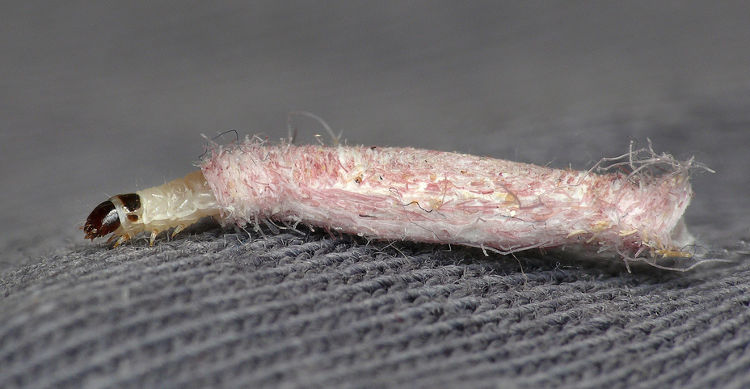 That, I believe to be the larvae of an Indian Mealmoth Plodia interpunctella, but it could also be Tineola bisselliella or Tinea pellionella. It's definitely emerging from a pupa, and it's definitely a moth larva, but I'd need more information for an accurate identification.

0
Worm type bug inside of stick? What is it?
18
What is this black and white worm in a white case?
13
What insect is this? (India)
12
Small worm living in some kind of cocoon, what are these animals?
5
What is this animal that hides in dustlike structure?
7
Identify this smooth-cocoon worm from Southern India
4
Identification of unknown bagworm (Singapore)
4
Species identification: flaky worm
3
Species Identification : Worm like insect but broad at back
2
What is this insect found commonly in coastal India?
See more linked questions