What are the requirements for a stable carbon cycle in sealed “bottle gardens”`?

The most famous example of a sealed bottle garden is David Latimer's bottle with a Spiderworth plant, pictured below, which has been sealed for 40 years. My own attempt at a bottle garden is failing and I'm looking to "debug" what's going on.

My garden is a 2 litre glass jar filled with gravel, sand and soil, filling about a quarter of the jar. The soil is rather damp. I'm observing the following: When the bottle is sealed, plants such as moss, strawberry shoots and seeds thrive for a couple of weeks. They will then wilt and worms that had hitched a ride in the soil try to escape. When opening the bottle, there is a strong smell exactly like manure. The brief exchange of air when opening the bottle is enough to allow the plants to properly rot over the coming days, with mold only now spreading. (This proves that oxygen was depleted before I opened the jar) I removed the dead plants, sprinkled seeds on the soil and closed the jar. The seeds germinated and thrived for a couple of weeks until the process repeated.

At first look, it appears that when oxygen has been depleted, anaerobic bacteria take over, producing H2S, which I assume kill the plants. Or are they killed by changes in pH under high CO2 concentrations? Why does this not occur for all bottle gardens? Is the problem that there's too few plants to keep up the oxygen level which keeps the anaerobic bacteria at bay, is it the waterlogged soil or some other factor I'm unaware of? 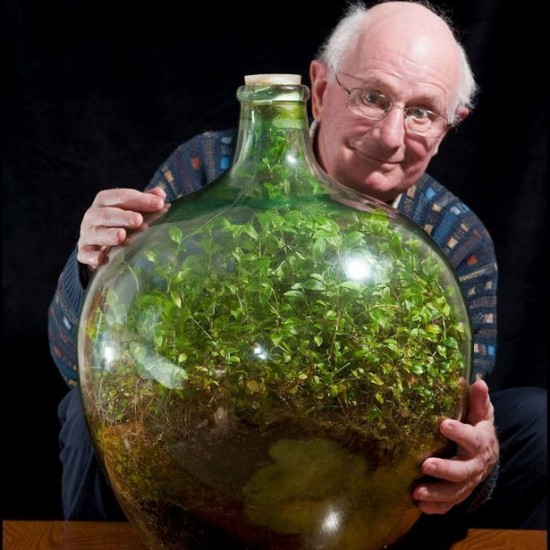 Latimer did something right with his bottle garden, which started with a seedling and some compost.

The problem lies in soil bacteria. There has been a project on a larger scale: Biosphere 2. After their initial trial they realised $O_2$ levels are getting much lower from what was predicted. The scientists team investigated the problem deeper and came to the conclusion that there was a lot of dead organic matter in the soil, which got consumed by aerobic bacteria. There were also other hypotheses: not enough sunlight and $O_2$ sequestration by concrete.

A solution for you would be to make sure there is little organic matter in your soil. Perhaps use inorganic "soil" like sand + some nutrients. And also make sure there is enough sunlight. Start also with small plants - too large plants in the beginning might change $O_2/CO_2$ ratio to abruptly during day and night cycle. (remember that plants are also consuming oxygen at night).

Not the answer you're looking for? Browse other questions tagged bacteriology plant-physiology ecosystem anaerobic-respiration or ask your own question.

11
What are the functions of magnetic bacteria?
3
Growing crops on the Moon
3
What is the effect of temperature and carbon dioxide on the opening and closing of stomata?
7
What are the branches of system ecology?
1
What nutrients are best suited for growing E.Coli
2
What are the (correct) terms for these flagella-arrangements?
1
Can nitrate be an electron acceptor for NADH generated in the citric acid cycle?
0
What are the negative consequences of a narrowed biodiversity to the planet?
4
What part, roughly, of the carbon in a plant comes from the soil? As opposed to the atmosphere?