What is the most condensed form of (stored) energy used in biology?

When considering how organisms store energy for later use, I was wondering what substance known in Biology is best for compacting the most energy in the smallest space(volume-wise).

With my (limited) knowledge, I would guess that it would be what we would normally call "body fat". However, I know I am probably not aware of most forms of stored energy, and I considered that perhaps substances like egg-whites may potentially contain more energy in the same amount of volume.

So, the question as in the title: What is the most condensed form of (stored) energy used in biology?

Alternatively, if there is no known "best": What would the leading competitors be?

The best ratio between weight and energy content (and of course also stability) has indeed fat. It's energy content is more than twice as high as for carbohydrates (sugars). See this table from here on the energy contents: 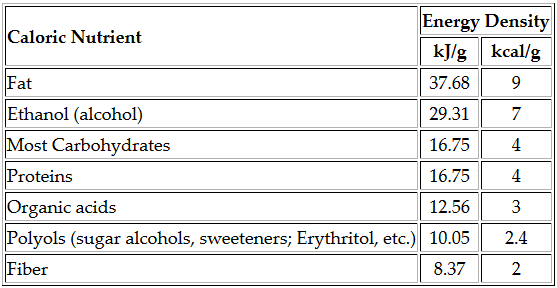 This is the reason why animals which hibernate or migrate fed up to build up fat resources before the winter or their journey. With carbohydrates they would need more than the double amount of stored carbohydrates to get the same energy. Proteins are approximately on the same level as carbohydrates.

If you look on this problem not by energy per mass but volume per mass, fat still wins. For this we need the density of protein (muscles in this case) and fat. Paper 1 (see reference below) say that the human muscles have an average density of 1.06g/cm³. Paper 2 lists a density of 0.92g/cm³ for fat. So fats (this is practically only valid for the human body, but should be in the same range for other animals) are about 15% less dense than muscles. As the energy density per weight is about double as high for fat, this compensates for the lower density.

Carbohydrates are better, but are still not as good as fat. It's a bit hard to find specific densities for carbohydrates in the human body, so let's use Glycogen (which is a widely found carbohydrate used for mid-term storage of energy) for this purpose. Paper 3 lists a density for Glycogen between 1.40–1.62 g/cm³, so fat has only 55-65% of it's density. Since the energy density of fat is about 2.25x that of carbohydrates, fat is still better.

If you look at ATP in comparison, it has relatively little energy to provide. ATP delivers about 32.3 kJ/mole (with 507.18 g/mole this make around 64 J/gram) per phosphate released from the molecule, which is 128 J/gram if both phosphates are released. This is approximately 300x less energy per gram than fat. This makes sense, since fats are completely oxidized (down to water and carbon dioxide), while in ATP only the phosphate bonds are broken. ATP acts as an energy carrier in the body and not as an energy storage molecule.

1
What is the energy source for adipocytes?
7
Why is leucine amino acid used the most in proteins and tryptophan the least?
7
At any given moment, how much energy is stored in the human body as ATP?
11
What animal has fat with the highest energy density?