The general understanding is that when I touch an object, I perceive its (relative) temperature.

A metal object at room temperature, however, will often feel cool to the touch.

This leads me to believe that the skin senses heat flux in addition to, or instead of temperature. (The metal conducts heat well, and therefore creates a greater flux when touched than a more insulative material.)

I am unfamiliar with the chemical process by which temperature or flux is converted into meaningful signals.

Background
(Including edits based upon comments)

Because the question is "Do humans perceive temperature or heat-flux?", I will answer the answer from a psychophysical perspective, i.e., by dealing with sensory awareness.

Just as with many other sensory systems, temperature sensors in the human body adapt to ambient stimuli (i.e., constant absolute stimulus levels). In other words, after being exposed for a while to a certain temperature, one looses the perception of temperature per se (assuming temperatures are within comfortable limits of course, otherwise general discomfort will arise such as shivering or sweating etc.).

Therefore, temperature sensing in humans is not absolute, but differential, and occurs when differences occur relative to the baseline.

Holmes and Wood (1968) mention in their Introduction the following, and I quote:

...three variables of thermal stimulation [...] affect the sensitivity of human subjects to warm and cool stimuli. These are (1) the temperature to which the skin has been adapted, (2) the area of skin over which the thermal energy is applied, and (3) the rate at which the temperature of the skin is changed.

With regard to your question on metal and whether heat-flux can be sensed: a metal surface will feel cool only when it is lower in temperature than your body. Suppose now you touch a metal object at room temperature, i.e. lower than your body temperature. In that case, as you already indicate, it will draw away heat quickly from your skin by conduction, creating a 'heat-flux' if you like. The extraction of heat thereby elicits a powerful stimulus, because a large temperature difference creeps into your skin as heat is drawn away from your skin and underlying tissues. As such, and contrary to other answers given elsewhere, I explicitly say yes, 'heat-flux' can be sensed as it per definition generates a temperature difference. This in contrast to touching insulators like wood or plastic, which will quickly adopt the temperature of the skin very locally where you touch it. However, as has been pointed out by others - this does not mean that temperature is measured by heat-flux sensors per se. In contrast, temperature is measured by temperature sensors that detect temperature differences (differential stimuli) between skin and external media. Because a temperature change is also a differential stimulus, it will also be detected, and hence 'heat-flux' will therefore be detected as well.

This is the modified answer in response to the discussion: 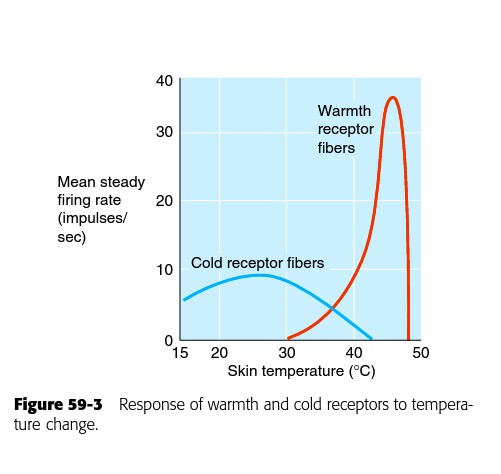 Only the temperature is measured as WYSIWYG mentions.

However the frequency of stimulus (How frequently the nerves fire - this depends on the temperature range in which the respective receptors fire) and the two types of receptors present on the skin allows the brain to interpret the flux. So Chris Stronks is correct in telling the heat flux is perceived.

When you touch a cold object the heat is lost through conduction and radiation through the portion of skin that is in contact with the object. The cold will cause vasoconstriction of that part of skin - This means that the temperature of that part of skin rapidly equilibriates with that of the object. As there is rapid cooling (assuming that the object is cold) the rate of firing of the warmth receptors decrease and the rate of firing of the cold receptors increase. This allows the brain to interpret that the skin is losing heat (the flux).

The radiation part of heat loss is more appreciated when you pass a uncurtained window during the winter - the temperature difference is so great that very high loss of heat occurs through radiation that you shiver. You have to note that during these instances there is no decrease in the core body temperature. The actual decrease in core body heat needs a long exposure to such conditions. In the scenarios detailed above the heat loss is primarily from skin which reflects the ambient conditions (very quickly). Thus the peripheral receptors effect Anticipatory Control which is effectively measuring the flux of heat through skin.

The opposite occurs when you suddenly stand beneath the sun coming from a cold room - the radiant temperature of the sun being so great will cause the skin temperature to rapidly rise causing the body to feel very hot (though the core body temperature has not changed much).

Interesting details that may increase your understanding (though not directly related to the question):

The heat control effected through sensing the change in the skin temperature is called Anticipatory Control. In this the brain "anticipates" what is going to happen - for example a sudden cold draught - and will respond to it - reponds by increasing the heat production (shivering).

Flux is defined as amount of heat transferred per unit area per unit time.

Our body does not perceive heat flux. It perceives temperature and tries to adjust heat exchange mechanisms until thermal homeostasis is achieved (in all warm blooded animals). This is a feedback controlled process.

Body function and metabolism are sensitive to absolute temperature. Also see this post.

So while temperature sensing is absolutely necessary even for cold-blooded animals, plants and other organisms, there is no mechanism to measure heat flux. You can just measure the effect of heat not the flow of heat. For e.g. you cannot say if a body is cooling more rapidly than the other just by perceiving it for a short duration. It is possible to consciously calculate heat flux but it is neither measured nor (afaik) is fed in as a parameter to any control systems that regulate body temperature.

Not the answer you're looking for? Browse other questions tagged skin perception temperature senses or ask your own question.