In insects, does the Alanine repeat occur on the homeodomain sequence of the abdomen or does it occur on a different sequence?

By "Alanine repeat", I am referring to the suppression of the formation of extra insect legs due to Ubx gene suppression through Distal-less repression. 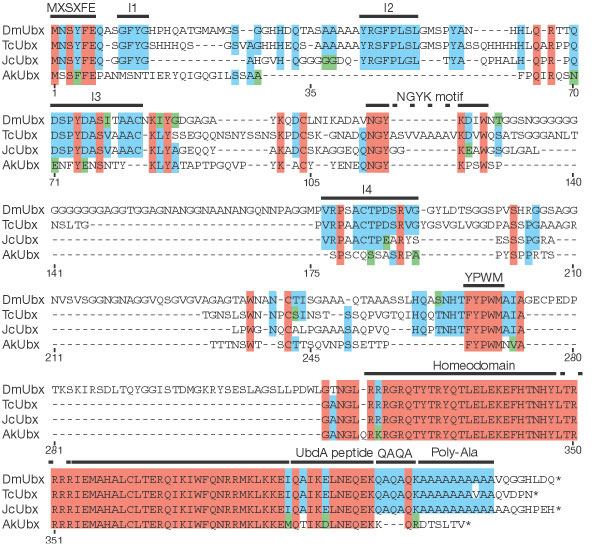 The onychophoran Ubx protein might function as an activator of appendage development. When the onychophorans and arthropods diverged, Ubx acquired an alanine-rich repression domain near its carboxy terminus. This domain mediates constitutive repression in insects. But in crustaceans the addition of the regulatory peptide causes it to function in a conditional fashion. As a result, Ubx does not suppress limb development in crustaceans. But it eliminates abdominal limbs in insects, greatly reducing the overall number of appendages compared with crustaceans.

You can read about it here:

Not the answer you're looking for? Browse other questions tagged genetics entomology gene-expression or ask your own question.

4
Macroevolution vs. microevolution
6
Inheritance of Huntington's disease
3
Do recessive alleles really exist?
10
Questions about insects eating flour and living in the cracks of a wooden cutting boards
1
How to interpret the simple sequence repeat (SSR) on the coding sequence, but not the related protein sequence?
3
Why is aneuploidy usually lethal?
2
Question about alternative polyadenylation
5
What species is this burrow-digging insect?