What are possible health risks to women having large numbers of children?

What is the possible health issue the women would face in this record?

The record for most children born to a single couple belongs to the first wife of Feodor Vassilyev of Russia. In 27 pregnancies between 1725 and 1765 she gave birth to 16 pairs of twins, 7 sets of triplets, and 4 sets of quadruplets for a grand total of 69 children.

A common problem for any woman who has experienced pregnancy and childbirth is damage to the levator ani muscle, which comprises a portion of the "pelvic floor." 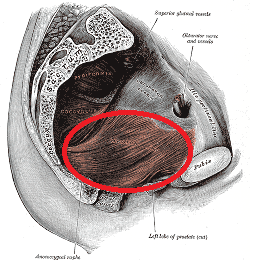 This can cause a number of symptoms, including urinary incontinence (due to an increase in pressure on the bladder from less effective muscular support), and possible prolapse of the bladder, uterus, or rectum into the vagina, again due to the weakening of the pelvic floor.

One health risk from going through multiple pregnancies is the risk of a uterine prolapse, also called a prolapsed uterus. The weakening of ligaments basically leads to the cervix and uterus "sagging". In the most severe cases, the uterus ends up in the vagina.

Parity and obesity were strongly associated with increased risk for uterine prolapse, cystocele, and rectocele.

The general risk of anything happening increases due to going through multiple pregnancies in a short time span, though. Without sufficient recovery between pregnancies, women are at a higher risk of placental abruptions and placenta previa. For the baby, this leads to a higher risk of premature birth with the associated issues of low birth weight and small size.

Not the answer you're looking for? Browse other questions tagged human-biology reproduction or ask your own question.

1
What are the biological and nutritional benefits of having numerous smaller meals a day?
1
How does the body respond to blood donation; are there any possible risks?
6
Very frequent multiple births in humans