How do the pharmacodynamics of the NSAIDs differ and are there “resistant” COX phenotypes?

I know that the non-steroidal anti-inflammatory drugs (e.g., aspirin, ibuprofen, naproxen) affect the enzymes cyclooxygenase (types I and II).

Is there any difference in the degree to which these drugs manipulate/inhibit the enzymes (I assume their affinities for COX-1 and COX-2 are at least somewhat different)? Is there any evidence as to whether the the NSAIDs collect in certain areas of the body in a compartmental fashion? Are there differences in fat solubility, etc., between the different drugs?

Finally, are there any known phenotypes of COX-1 and COX-2 enzymes that are present in the general population that affect the ability of these drugs to act?

This is a draft.

How do the pharmacodynamics of the NSAIDs differ - -?

The anti-inflammatory activity of the NSAIDs is mediated chiefly through inhibition of biosynthesis of prostaglandins (Figure 36–2). Various NSAIDs have additional possible mechanisms of action, including inhibition of chemotaxis, down-regulation of interleukin-1 production, decreased production of free radicals and superoxide, and interference with calcium-mediated intracellular events. Aspirin irreversibly acetylates and blocks platelet cyclooxygenase, while most non-COX-selective NSAIDs are reversible inhibitors.

and see the coming answer below. These questions should be answered together. To split them can be confusing.

Is there any difference in the degree to which these drugs manipulate/inhibit the enzymes (I assume their affinities for COX-1 and COX-2 are at least somewhat different)? 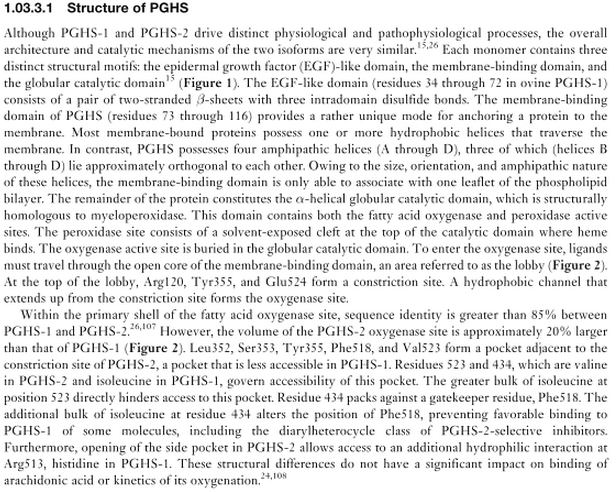 and their conclusions about the structure

and please, see the whole chapter of the book, since its about the topic - and I think good one.

On the other hand, selective COX-2 inhibitors may increase the incidence of edema and hypertension.

To varying degrees, all newer NSAIDs are analgesic, anti-inflammatory, and antipyretic, and all (except the COX-2- selective agents and the nonacetylated salicylates) inhibit platelet aggregation. NSAIDs are all gastric irritants and can be associated with gastrointestinal ulcers and bleeds as well, although as a group the newer agents tend to cause less gas- trointestinal irritation than aspirin.

In short, there must be differences to which these drugs manipulate/inhibit the enzymes. Please, see

Defining the COX Inhibitor Selectivity of NSAIDs: Implications for Understanding Toxicity. Expert Rev Clin Pharmacol. 2010;3(6):769-776. And see the chapter Expert Commentary which locates at the end of the publication there:

Not withstanding the caveats on the merit of IC50 values, in vitro analyses of COX-1 and COX-2 selectivity of NSAIDs has driven the concept that inhibition of COX-1 explains the predominant reduction in synthesis of mucosal protective PGs and hence gastrointestinal toxicity of NSAIDs relative to COX-2 inhibition, which plays a role in ulcer healin

The discovery of two cyclooxygenase isoforms (COX-1 and COX-2) led to the concept that the constitutive COX-1 isoform tends to be homeostatic in function, while COX-2 is induced during inflammation and tends to facilitate the inflammatory response. On this basis, highly selective COX-2 inhibitors have been developed and marketed on the assumption that such selective inhibitors would be safer than nonselective COX-1 inhibitors but without loss of efficacy.

Inflammatory processes are expressed by both COX-1 and COX-2 differently. This means that a change in the cell membrane expresses lysosomal enzymes differently:

The cell damage associated with inflammation acts on cell membranes to cause leukocytes to release lysosomal enzymes; arachidonic acid is then liberated from precursor compounds, and various eicosanoids are synthesized.

Also, the cyclooxygenase (COX) pathway of arachidonate metabolism produces prostaglandins, which have a variety of effects on blood vessels, on nerve endings, and on cells involved in inflammation. (See Merck, ch. 18)

I like the Figure 36.2 in Merck's manual. To better answer your question, one could label the arrows there with relevant enzymes in each processes and compare those between COX-1 and COX-2 and relate to corresponding publications (only few existing!).

Adrenaline and other compounds activate the cyclooxygenase pathway, COX-1 pathway for instance, and the conversion of arachidonate to PGs and TXs. [2, p. 67] The classic law of mass action allows to describe the reversible binding:

I have not heard about this that there would not be. There are so many components in PGHSs which can develop resistances.

[A]re there any known phenotypes of COX-1 and COX-2 enzymes that are present in the general population that affect the ability of these drugs to act?

Please, see for the phenotypes of COX-1 here, while about COX-2 much less has been research, see here - no known phenotypes, see this. Please, note also that COX has at least two isoforms: COX-1 (PGHS-1) and COX-2 (PGHS-2).

Is there any evidence as to whether the the NSAIDs collect in certain areas of the body in a compartmental fashion?

Each disease has its own characteristics. Gout, for instance, has swelling of syvovial joints and usage of NSAIDs with COX-2. My professor of abdominal surgery answered to this question directly - impossible to answer generally which I agree with her. (17.10.2014)

I think the OP has in mind some antibiotics which concentrate in some parts of the body (such as 1st generation quinolones concentrating in the renal tubules and bladder, thus exerting local antibacterial effect). There is no similar effect with NSAIDs.

Instead, NSAIDs have local and systemic effects, not because they are concentrating in some parts of the body, but because they have several mechanisms itself. Please, see this thread about Effect of NSAIDS on stomach.

Are there differences in fat solubility, etc., between the different drugs?

Fat burner - of course, there are differences in fat solubility between different NSAIDs. Please, see this publication Solubility of Nonsteroidal Anti-inflammatory Drugs (NSAIDs) in Aqueous Solutions of Non-ionic Surfactants. I will update this part next week more.

Not the answer you're looking for? Browse other questions tagged human-biology biochemistry pharmacology human-genetics enzymes or ask your own question.

6
Why do different pain killers have different effects on people?

4
Are there any websites offering graphs for the light absorption of different enzymes?
2
How do PLINK files and HapMap Phased files differ?
5
Are there dangers to Teflon and aluminium cookware?
6
What are the psychedelic effects of (star) anise and how many people are affected?
2
How to define drug-resistant or -sensitive cell line when knowing the IC50 values?
3
How do antibiotics create drug-resistant strains
7
Are there enzymes for every given reaction?
3
How many possible human genotypes are there that produce distinct phenotypes?