It may be different for other people, but for me, anything above 32°C (90°F) is very uncomfortable, and my body is inclined to seek cooler temperatures. But I would think that at 32°C, the body would have less work to do to get itself to 37°C. So why is it not comfortable in those temperatures?

My theory is this, but I don't know if it's right:

The body's abilities for warming itself are much more sophisticated than its abilities for cooling itself (which are non-existent, possibly?). So it likes to be in an environment 20-30 degrees below optimal because it can easily handle that. But up in the 32's and we're dangerously close to going over the optimal, and the body doesn't know how to get it back down after that, so we are inclined to seek safer temperatures.

The body can never stop working. If the body stops working, you die. And while the body is working it cannot avoid generating heat. Being in an environment somewhat colder than the body makes getting rid of this excess heat easier, and is thus more comfortable.

The body can cool itself down by sweating.

This is due to the fact that skin is the interface where heat is lost.

Our body due to constant functioning, produces heat constantly as a by-product (due to exothermic reaction of ATP break mainly). The excess heat needs to be conducted away from the body, or it will cause a decrease in the body metabolism to prevent temperature rise.

Heat is lost mainly through the skin by:

When the ambient temperature rises, the heat lost through radiation, conduction, and convection drastically decreases. And often when the temperature is high, there is a accompanying rise in the relative humidity which decreases the heat loss through sweating (as the amount of water vapor is high in the atmosphere, the sweat does not evaporate, so no heat is lost).

So the heat which is not lost is felt as the "hot sensation". It relieves by stopping any activity, seeking shade or a cool place, etc... all of which increases the heat lost or decreases the heat produced.

You have to note that the temperature of skin is lower than the body temperature. 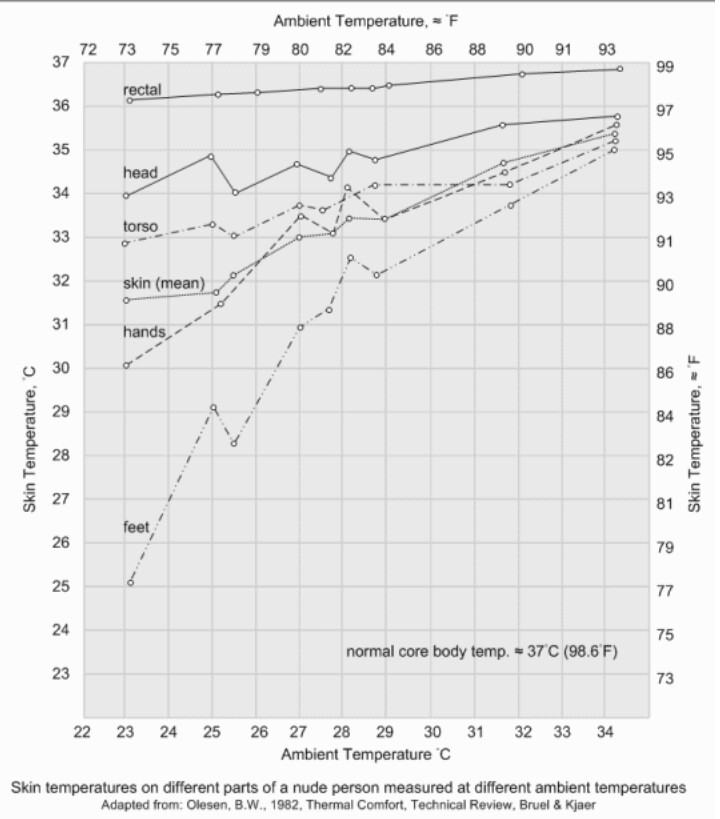 For more details see this question. All the answers in this question are good and will increase your understanding of what actually happens.

Your body requires energy to function. Just like in a powerplant, the energy comes from oxidizing fuel (food, instead of coal or gas). The efficiency Of conversion is rather low, and results in excess heat, which must be rejected to the environment. When it's cool, the heat is easily convected to the surrounding air. When it's warmer, or you're producing more waste heat than can be rejected through simple convection, your body relies on evaporative cooling, i.e. sweating.

When it's very cold, the normal waste heat is not sufficient to keep you warm enough for normal bodily functions, so you shiver. This is physical activity which your body performs solely to create waste heat, which warms you up.

There's an article about muscle efficiency on Wikipedia, indicating that the human body is about 25% efficient. This means that about 75% of the energy consumed must be rejected as heat.

It may be different for other people, but for me, anything above 32°C (90°F) is very uncomfortable, and my body is inclined to seek cooler temperatures

I think you've rather nailed the key point here. I'm going to deduce from your question that you live in a temperate country? Every year, foreign students from India come over to my university in Leicester, UK. Even when the temperature is, to us, unpleasantly hot they will be shivering in their coats and complaining it's too cold. Similarly, were I to go over to India I'd be suffering in the heat while they're thinking it's a lovely comfortable temperature.

So, I believe, the answer is nothing to do with the ability of the body to maintain certain temperatures - you'd need to go considerably above 32°C or below 21°C to reach temperatures the body can't cope with - but rather a question of acclimatisation. You find 21°C comfortable and 32°C comfortable because that is the temperature that you've become used to. You can probably even recognise this from your own experience: I'm sure you've experienced days in spring feeling delightfully warm when days of the same actual temperature in autumn feel unpleasantly cold.

Not the answer you're looking for? Browse other questions tagged human-biology homeostasis or ask your own question.

13
Why do we experience temperatures below 37 degrees Celsius as 'hot'?

7
Why do people feel extreme cold at different temperatures compared to other people of same body structure?
8
Why are diabetic people often overweight?
3
Why are people tired after surgery?
4
why do overweight individuals sweat more than ordinary people?
8
Why antipyretics do not bring the body-temperature below normal?
6
Why do obese people heal more slowly?
4
why do our eyes not go red in response to body temperature?