First of all, I am not a biologist.

Almost for a week, a question has come to my mind:

"Is it harmful ceaselessly exposing a plant to light?"
(I mean with natural & artificial light with proper spectrum)

I have been searching for a week, and I stumble upon many weird and wonderful things, and by them, I have become able to consider this topic more deeply, and refine my original question. However I have still not found the answer.

I am already familiar with these topics:

So my main question:

As a layman I have started to fumble towards light-independent reactions, but I have not found strong claim. I have learnt that there are processes which taking place during dark phase, but are these reactions impossible in presence of light?

But probably there are other factors.

My resources were: Google, Wikipedia, (a tons of) academic paper, many article from Botanical Gazette, many blog & webpages about botany & greenhouses etc.

I cannot say anything about the general case, or specifically for day-neutral plants. However, Sforza et al. (2012) have studied the effects of light conditions on algae (used for biofuel production), and their results indicate several problems with continuous light. In continuous light conditions they find lower chlorophyll contents and higher carotenoid concentrations in cells, which leads to lower photosynthetic efficiency. 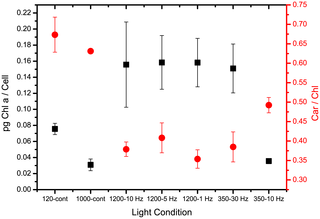 This figure shows chlorophyll contents (black) and chlorophyll/carotenoid ratio (red) under different conditions, with the two treatments to the left representing continuous light. (graph from Plos One)

Results show that Nannochloropsis can efficiently exploit even very intense light, provided that dark cycles occur to allow for re-oxidation of the electron transporters of the photosynthetic apparatus. If alternation of light and dark is not optimal, algae undergo radiation damage and photosynthetic productivity is greatly reduced.

However, they also experiment with pulsed light, which in some cases lead to even lower rates of photosynthesis:

However, similar experiments, at different frequencies, also showed that alternating dark and light may be detrimental, as demonstrated by the growth inhibition observed in the 1200-1 and ŌłÆ5 Hz curves. These cells showed a decrease in Fv/Fm values similar to that observed under constant strong light, indicating that the inhibition of growth was due to photoinhibition.

They also find that light pulses can be very short, and still allow for the photosystem to reset:

The optimal duration of light pulses was found to be around 10 ms, which is consistent with the suggested PSII turnover rate in whole cells [4], [46]. Accordingly, after photon absorption by the photosystem, 1ŌĆō15 ms are needed to reset the system, before it is ready to receive another photon [22]. If the illumination is this short, most photons are exploited for photosynthesis and do not lead to the formation of ROS which then causes photoinhibition. These results indicate that even strong light does not cause damage if it only lasts a short time. Conversely, longer exposure allows the generation of ROS and damage and, in this case, the abrupt changes in illumination undergone by the cells are as harmful to the photosynthetic apparatus as constant high light.

Not the answer you're looking for? Browse other questions tagged botany plant-physiology photosynthesis growth photoperiod or ask your own question.

12
How do plants 'tell time' for circadian rhythms based on a ~24 cycle?
3
Growing crops on the Moon
3
Independence of Light independent reaction in photosynthesis?
3
Photoperiodism: Short-Day Plants
1
How do CAM plants keep stomata closed by day and open at night?
8
Are plants really oxygen neutral?
6
Why aren't leaves black?
5
What happens to plants if they are exposed to "sunlight" 24h a day?