I'm getting started using ECG using a 3 lead system by iWorx. I have place the leads on my two wrists and the ground on my ankle and have recorded some data into the provided LabScribe 3 software using the ECG template. Can anyone help me interpret what I'm seeing? 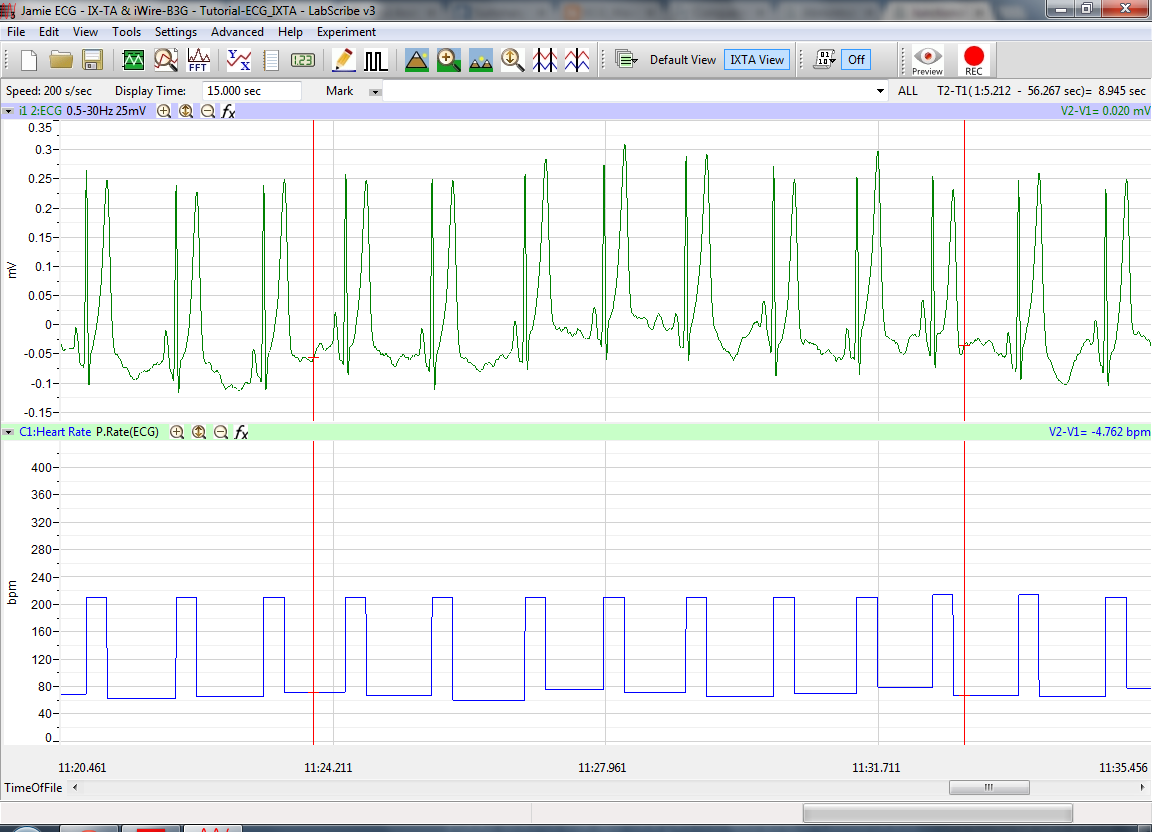 It doesn't look like the standard QRS I see in my textbook, but it's so regular (this is just a snippet) that I don't believe I'm seeing artifacts.

Any insight would be greatly appreciated.

If you're looking for an explanation of the parts of the waveform you recorded, here's an annotated version:

I hope that helps you map it back to the "standard" QRS you saw. The AV delay is the time between the depolarization of the atria and the ventricles.

I agree, the T-wave is too intense. I'm not familiar with a 3-lead ECG that connects to the wrists--I'm more familiar with chest ECGs. I'm guessing the large T-wave is an artifact of measuring through the wrists (hopefully it's not indicative of a health condition such as Hyperkalemia). It looks like your resting heart rate is around 52 BPM--that's healthy.

The signal itself comes from the heart muscles. It takes a number of milliseconds for the electrical impulse to travel from the sinoatrial (SA) node to the atrioventricular (AV) node, down the His bundle, and finally to the Purkinje fibers in the ventricles. It takes this long because the movement of charge is caused by ions in the cells physically moving. That change in charge is conducted (via normal electrical conduction, such as you see in a wire) through the tissue and muscle to the electrodes on the wrists--this conduction is effectively instantaneous (in this case, it's electrons "pushing" each other, not ions moving within cells as in the case of the heart's electrical system). ECGpedia has some good background on this. 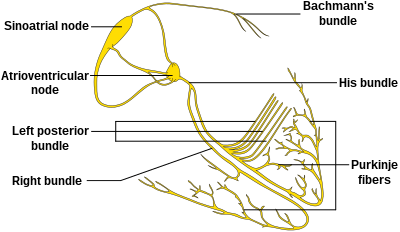 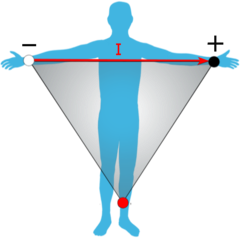 So, in summary, the signal you're seeing is produced by the heart's conduction system, not the muscles in your wrists. Muscle noise would manifest itself as noise or random spikes in the ECG.

Not the answer you're looking for? Browse other questions tagged physiology cardiology lab-techniques electrocardiography human-physiology or ask your own question.

6
Is a raised baseline between T and QRS normal in any ECG lead?
5
How does strength of a pulse related to EKG(ECG)?
2
To get Standard ECG from PhysioNet?
8
How to analyse an ECG?
2
Minimal viable EEG equipment for dissertation research on BCI / BMI
12
ECG wave names origin
0
ECG detection using minimal number of electrodes