Since as long as I have been doing cell culture, the word confluency has been used to describe the percentage growth of cells or area covered by them. However, no dictionary that I have found uses this word. I was wondering if anyone could reliably state where the meaning comes from or how the association began, and truly what it means. I don't believe I can post this on another Stack Exchange because the word doesn't have even a resembling meaning in the dictionary. Cell culture is such an integral part of cell biology, medical research and biological manufacturing. And this term is an integral part of cell culture. I was surprised to be unable to reliably verify its meaning. 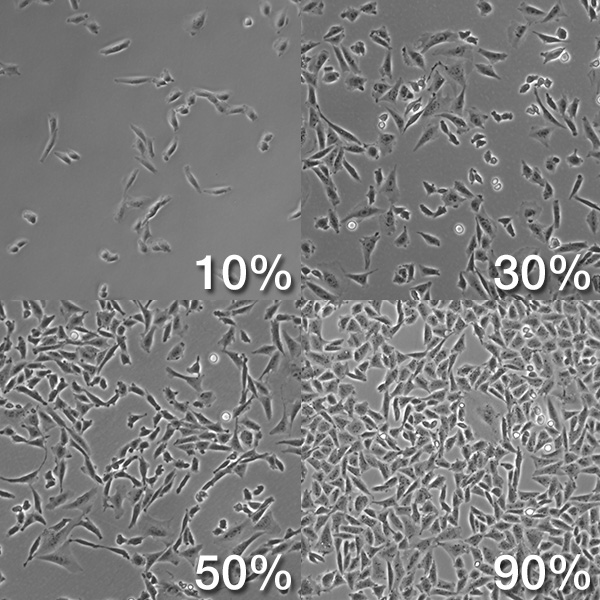 The word confluence (but rarely confluency) occurs in various biological contexts in the first half of the twentieth century [4], but the first example I can find in relation to monolayer cell culture is in 1961 [5], although the term confluent appears in the 1950s [6]. The form confluency seems to have appeared at about the same time as confluence [7]. Since the 1960s both forms have been used by different authors, currently with comparable frequency [8]. Some authors employ either one or the other exclusively, others use confluency when indicating a percentage designation and confluence to indicate the absolute concept — or vice versa [9].

The reason that confluency is not defined in general dictionaries (or even in the Oxford Dictionary of Biology [10]) can only be surmized. None of the online dictionaries I have consulted [11] give the cell culture usage as an example of confluence, suggesting that its use is less frequent than in other technical contexts, where the meaning is similar. With this usage of confluence not being thought to merit separate mention (irrespective of the importance or otherwise of cell culture) then the need to define an alternative form would not have arisen.

It should be added that there is there is a Wikipedia entry for confluency [12] but, despite its title, this uses the term confluence in its definition:

[1] The hits reported by a Google Book ngram for the word confluency between 1800 and 1954 were analysed individually, as journal results from ngrams often have erroneous dates. There was one example (1829) of its occurrence before 1900, and 13 before 1950, about half in relation to vaccines or biological phenomena.

[2] The etymology of confluence given in the online etymological dictionary is: early 15c., “a flowing together, especially of two or more streams,” from Late Latin confluentia, from Latin confluentem (nominative confluens), present participle of confluere “to flow together," from assimilated form of com “with, together” (see con-) + fluere “to flow” (see fluent). I would emphasize that the word confluence is not a compound formed in English by adding a prefix to the word fluency, but derives from the compound word, confluentia, already evolved in Late Latin (i.e. by the sixth century).

[3] The Oxford English Dictionary quotes an early instance of the extension of the meaning of the word confluence (1606) as “In this confluence of so many prosperous successes”. A variety of examples, appearing to come from the fields of politics, philosophy and mathematics, can be found in the Cambridge Dictionary online for its second definition of confluence, “a situation in which two things join or come together”.

[4] This can be seen by going to the websites of some of the older biological journals (e.g. Journal of the National Cancer Institute or the Journal of Experimental Medicine) and searching for the word confluence.

[6] For example W.R.Earle (of Earle’s saline) uses it in a paper on the growth of fibroblasts in 1951, and T.T.Puck (of Puck’s saline) uses it in a 1958 article in Experientia. The earlier use of confluent (also of 15th century origin) in relation to monolayer culture suggests that the word confluency, rather being a corruption of confluence, may have been formed from the adjective — perhaps in ignorance that a noun form already existed.

[8] There seems to have been division at the outset. In the US, Harry Eagle and Renato Dulbecco used the term confluency, whereas Howard Green and George Todaro used confluence. What one might refer to as the Glasgow school always used confluence: John Paul) at the Beatson Institute and his student Ian Freshney, both authors of influential books on cell culture. The more recent frequency of use may be judged from a Google ngram for “cell confluence v. cell confluency”.

[10] The Oxford Dictionary of Biology has nothing between the entries for cone and confocal.

Not the answer you're looking for? Browse other questions tagged terminology cell-culture etymology or ask your own question.

9
Gloves for Cell Culture?
2
Testing CO₂ for cell culture
0
Gender of BEAS-2B cell culture
1
Confluency or confluence, which term is correct to describe the % area covered by cells?
4
Coracoid vs. Coronoid - Etymology/Naming Choice?
5
What is the meaning of "leukemic cell recovery" in an abstract?
1
Is my cell-culture contaminated with mold?