What's the (or some of the) minimum(s) amount of atmospheric carbon dioxide needed by plants?

We currently have a problem of increasing $\ce{CO2}$ in the atmosphere. But assuming we find a way to carbon sink it, what is the minimum $\ce{CO2}$ we need to leave in the atmosphere to provide a source for plants to photosynthesize? I'm assuming this may vary per plant, and that we could choke plants so they're less productive - but at some point they will starve to death if we remove too much $\ce{CO2}$.

Where does this point lie?

Approximations, or a specific data point (say for one plant, or one type of plant) would be an adequate place to start.

Current atmosphere composition is $\pu{0.035\%}$ carbon dioxide. In the past it has been higher (has it ever been lower?), which in theory has resulted in higher plant growth - but I've seen some contradictory statements about higher Carbon Dioxide.

(related: What is the effect of a pure-oxygen environment on a plant?)

The values provided in the other answer are actually related to the minimum values experienced by land plants in the past, not the theoretical minimum possible concentration of CO2 capable of maintaining plant life.

During the Last Glacial Maximum (LGM; 18 000–20 000 yr ago) and previous glacial periods, atmospheric [CO2] dropped to 180–190 ppm, which is among the lowest concentrations that occurred during the evolution of land plants.

Thus, what is the theoretical minimum possible concentration of CO2 capable of maintaining plant life?

According to the same paper (Gerhart and Ward, 2010), there has been several experimental studies focusing in low concentration of CO2:

In the mid-1990s, a later phase of technology was introduced at the Grassland, Soil, and Water Research Laboratory (USDA-Agricultural Research Service) that involves an outdoor tunnel system, whereby plants are grown across a continuum of modern to low [CO2] (Mayeux et al., 1993; Fig. 3b,c). During the day, air of known [CO2] is pumped into one end of the tunnel where plants experience relatively high [CO2]. Plants near the end of the tunnel, on the other hand, experience low [CO2] (similar to glacial values) as a result of photosynthetic removal of CO2 from air as it moves progressively through the tunnel. At night, airflow is reversed while plants are solely respiring, and this serves to equalize [CO2] throughout the tunnel.

Despite those studies not focusing explicitly on what's the minimum possible concentration, we can still draw some conclusions based on them. For instance, in Fig.4 (ibidem): 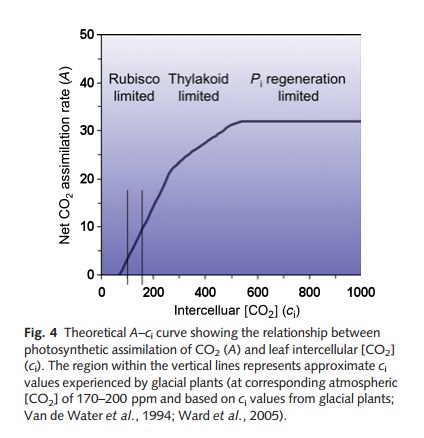 As you can see, those vertical lines represent the minimum concentration experienced in the past. However, we still observe CO2 assimilation (photosynthesis) below those values. Unfortunately we cannot simply get the value where the line touches the x axis, because those values are intracellular CO2 concentration.

Thus, we can say that, as a rough estimate, the value you want lies between 50ppm and 170ppm (probably closer to 170ppm than to 50ppm).

Of course, that minimum possible value depends on several factors, as the species of the plant, the type of photosynthesis (C3, C4, CAM), temperature, humidity etc.

There is no one answer of "how little". Each terrestrial plant depending upon its type has some minimum below and a maximum above which it could not survive over a sustained time at that level. So it's not just "how little" but "what plant" and "for how long" until it dies, rather than just going dormant or simply not growing. But the question doesn't involve carbon dioxide alone, there are other conditions (amount of sunlight, temperature, humidity, annual rainfall, soil quality, air quality) impacting any lower and upper limits. Deriving some answer for some plant in a closed system like a tube in a lab is one thing. In nature, the conditions leading to some extreme carbon dioxide level (like either 50 ppmv or 5,000 ppmv) the conditions themselves just to get there likely would kill a plant before even reaching the level of carbon dioxide.

It's rather immaterial to the question this assumption that there is some problem in current atmospheric concentrations of carbon dioxide. Problem to what, how and why? Yes, carbon dioxide levels rose in 2017 by about 2.48 ppmv, to 407.54 ppmv. https://www.esrl.noaa.gov/gmd/ccgg/trends/global.html There's also a current 0.79°C anomaly to go along with that 408 ppmv level. https://www.ncdc.noaa.gov/cag/global/time-series/globe/land_ocean/12/3/1880-2018 Assuming some sort of a direct cause/effect relationship to the planetary average temperatures solely attributable to this rise in carbon dioxide levels, still asks the question, is that all a problem? Trying to answer that is another issue entirely though, and also rather immaterial to the question of how little is too little, since it's going up not down.

We can scientifically - by observation and experimentation - establish both that increasing atmospheric concentrations of carbon dioxide are happening, and that carbon dioxide absorbs and emits in the infrared. We can also show the global average sampled near-surface temperature and trend are up. However, like questions of what level of carbon dioxide is not enough for plants, what we can't observe or experiment upon - on the actual Earth's planetary weather systems - is maintaining everything else and seeing what occurs with a given amount of one or more greenhouse gases that is higher or lower than the current amount. We can only experiment in non-Earth conditions or model scenarios on computers. Simulation, given certain other assumptions. This makes it difficult to do a lot of things, including calculating in the atmosphere when there's not enough carbon dioxide for plants. In large part, this is because it's not possible to control most of the hydrosphere, or the sun, or the many other factors impacting plants and how well or badly they fare.

That said, there is only one period in Earth's history where the conditions are like they are now, and that is now. In the existing conditions, it seems unlikely that - regardless of how much or little warming it causes - there is any way to reduce the amount of carbon dioxide in the atmosphere in any realistic timeframe to something lower than it was in 1880 (proxy, ice cores, 282.9 ppmv https://sealevel.info/co2_and_ch4.html)

A question like "at what level of carbon dioxide in the Earth's atmosphere do plants start to die" is a tricky one, because the conditions required to get to 250 (or 200 or 150 or 100 or 50 or 0) in the atmosphere would most likely require an atmosphere that would have lost much of the greenhouse effect to get there. Essentially plants (and just about every animal that would miss eating them) would be hit by extreme cold before they were hit by carbon dioxide starvation.

Although the best answer to these sorts of questions might be found in the ice core proxies, in that during the last million years or so, the atmosphere has not been lower than about 180 ppmv https://carboncycle.princeton.edu/research/atmospheric

In a controllable laboratory environment, different plants have different levels of carbon dioxide at which they won't grow, go dormant, or die. These are created conditions though, artificial, unnatural. On the Earth, in the system that actually exists, those levels of any of the greenhouse gases appear unreachable in a working biosphere anywhere near like the one we have. There are too many variables to just consider carbon dioxide, because it can only be experimented upon in a closed system that is unlike reality.

Minimum concentration in PPM to support plant life varies from 185 ppm to 225 ppm. We are at 433 ppm at the moment. Prior to this Ice Age cycle that started about 3 1/2 million years ago the PPM Norm was between 900 and 1120 ppm. For reference if anybody is interested in knowing where we are at prior to man cause global warming we were at 240 to 250 ppm. Yeah when I discovered with the plant life minimum was and then where we were at it scared the shit out of me too I.

DemonvalkerDemonvalker
1
$\endgroup$
2
Add a comment  |
Highly active question. Earn 10 reputation (not counting the association bonus) in order to answer this question. The reputation requirement helps protect this question from spam and non-answer activity.

9
What is the effect of a pure-oxygen environment on a plant?