Do our ears or brains gradually adapt to noise pollution?

Having lived in various places all over the world for the past 9 years of my life, one thing stood out to me throughout this time, and now in particular. From a quiet place on the countryside in Sweden, I moved to Manchester for my studies. When I first arrived there, I felt the city was very noisy, a feeling which gradually reduced as I presumably got used to the noise levels there. From Manchester I moved over to Saitama in Japan, an enormous city right next to Tokyo with a considerable amount of noise during the day, and buildings that have little to no sound insulation. With the exception of particularly loud noises, I again adapted to the sound levels in the country, which at the time, I felt was no more than a natural response in terms of how much attention we pay to the noise. If I'm distracted by work or other activities, I have little reason to dwell on the sounds of driving cars and talking people.

The thing I couldn't explain purely by the 'paying attention' argument however was when I moved back to the Netherlands, to an apartment with excellent sound insulation. My apartment is located in front of a somewhat larger road, and cars pass by almost consistently. However, when I moved in I could barely hear these cars driving past, something that stood out to me as fairly pleasant. I thought a little bit of ambient music would kill the sound of these vehicles driving past altogether.

Now skip ahead one month, and I can hear the cars almost as if I'm standing next to them, an exaggeration of course, but the sound is much clearer than it was when I moved in. I know that nothing has changed in terms of insulation and I know that no windows are open. Strangely the only thing that appears to have changed is the clarity in which I perceive this noise, as none of the other people whom I've asked seem to share the same opinion (that is, that the noise has grown louder). This made me wonder - does our hearing adapt to noise pollution, and if so, how does it work?

This is a fascinating case of sensory adaptation and neural adaptation. Another example of this would be when you stop smelling something after being exposed to it for long periods of time (as you probably know, this "long period of time" happens to only be a few minutes). A great representation of this happening with the nerves in the skin was done by Georg Meissner: 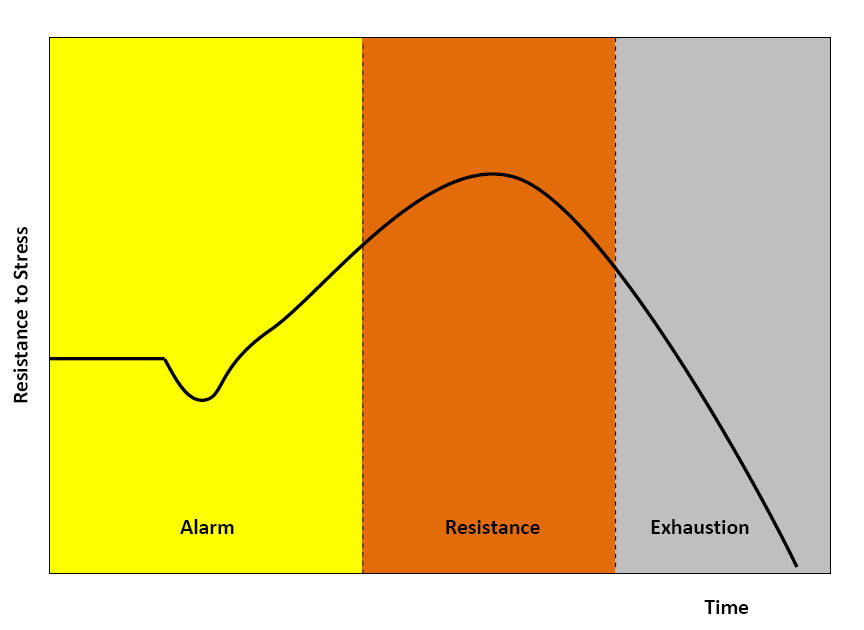 This image is from https://www.boundless.com/psychology/textbooks/boundless-psychology-textbook/sensation-and-perception-5/sensation-37/sensory-adaptation-160-12695/

When stimulus is applied, these nerves begin rapidly sending messages to the brain in the alarm period. The rate of these signals slowly start to decrease over time in the resistance period until they finally reach exhaustion and stop completely in, of course, the exhaustion period. Keep in mind that the time it takes for all this to happen varies greatly upon what type of cell it is (obviously olfactory cells have a much shorter exhaustion time than, say, hair cells (hearing cells)). After these cells have had a chance to recover (more like recalibrate actually), we can begin to hear/smell/feel/taste again.

Very quickly and totally from the top of my head: Traffic noise is in many cases dominated by low frequencies, with the whole spectrum somewhat similar to a distorted 1/f function, with a few tonal peaks for exhaust noise and tyre/tread sounds. Now add the structure you are living in: "excellent sound insulation" in the EU is (still) dB(A)-focused, meaning architects and planners are aiming for a "wow" effect in noise reduction by eliminating that what's easy to eliminate - high and mid frequencies, ignoring mostly the low (and energy-rich) frequencies, which are incidentally the ones the A-weighing of noise is (historically) ignoring as well. As a result, you are basically living in what's known as a low-pass filter, one that is also "drawing" tonal peaks (resonances, room nodes) out of that low-frequency noise mixture. At first, your cochlea's short-term adaption mechanisms will do their job well and tone down signals that are not meaningful (MOC reflex).

Over time however, the presence of low-level tonal, continuous sounds can damage ("wear out") a specific sensor type necessary for this reflex to work. As a result, even inaudible LFN noise can, over time, lead to a distal sensitization effect. In many cases the culprit is actually not the traffic noise itself, but HVAC installations like heat pumps, A/Cs and gas turbines. The effect of "I can hear too much" (being aware of noises) as a result of sub-threshold LFN-exposure is known in the medical literature as a symptom of VAD stage I / II and in fact quite common in the urban population. Certain medications (Gentamycine, cis-platines) as well as organic solvents (acetone) and some disinfectants can speed up this process, which is non-reversible and poses a risk factor for suffering atypical (early onset) hearing loss later on... The "I hear too much" effect has been quite a solid indicator of long-term, low-level IS/LFN noise pollution.

To be on the safe side and to rule out a sub-threshold LFN-problem, you should an seek medical advice. Sources:

Ebner, F., Eulitz, C. and Möhler, U., Approaches for a comprehensive determination and assessment of infrasound effects in Germany. DAGA 2013 Conference Paper.

Not the answer you're looking for? Browse other questions tagged hearing or ask your own question.

9
Does the human ear adapt to noise levels?
5
Does prolonged exposure to low pitch but low volume noise affect hearing or stress?
5
What's the frequency resolution of the human ear?
5
Are our ears more sensitive to low or high pitched sounds?
4
Is brain plasticity such that we can train ourself to see with our ears?
6
Are there gaps in what our ears can hear?