A young animal has never had much energy. He is brought to a veterinarian for help and is sent to the animal hospital for some tests. There they discover his mitochondria can use only fatty acids and amino acids for respiration, and his cells produce more lactate than normal. Of the following, which is the best explanation of his condition?

A) His mitochondria lack the transport protein that moves pyruvate across the outer mitochondrial membrane.

B) His cells cannot move NADH from glycolysis into the mitochondria.

C) His cells contain something that inhibits oxygen use in his mitochondria.

D) His cells lack the enzyme in glycolysis that forms pyruvate.

E) His cells have a defective electron transport chain, so glucose goes to lactate instead of to acetyl CoA.

A) So, from this assumption, pyruvate would build up in the cytosol of cell. However, I do not see why lactate would be formed. Lactate forms when there is a lack of NAD+. In this case, there is no problem with NAD+. All NADH will be recycled into NAD+ by the Electron Transport Chain in the mitochondria.

B) I do not know what will happen in this case. Too many contradicting factors. Can anyone explain?

C) This is clearly not correct. If there were no O2,then there would only be lactic acid fermentation; the protein and fatty acids would not be used.

D) If lactate is formed, pyruvate must have been formed.

So, I am debating between A and B. Can anyone explain why the textbook says A?

EDIT : If anyone could give me a step-by-step approach to solving this problem, I would really appreciate it. This is supposed to be a challenge problem not representative of test questions, but I still want to fully get it.

Short answer
(A) is a possible answer and is indeed cause for fatigue, as pyruvate is needed for the Krebs cycle to run. The krebs cycle is an essential step in the generation of ATP in aerobic organisms. (B) is incorrect because NADH is never transported into the mitochondria in any organism (it is a nonsense answer). 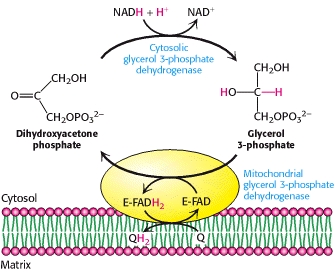 Hence, (B) is incorrect.

EDIT: Now why would lactate be formed in (A)? Pyruvate builds up in the cell, as it cannot be transported into the mitochondria. Since lactate dehydrogenase has pyruvate as a substrate, the equilibrium of this reaction will be pushed to the right and lactate will be formed:

18
Why is a lack of oxygen fatal to cells?
3
Is glycolysis the beginning part of fermentation, or does fermentation follow glycolysis?
1
What is the fate of NADH produced in the liver during oxidation of lactic acid?
8
Why is carbon dioxide produced in alcohol fermentation but not in lactic acid fermentation?
2
Does Glycolysis produce lactate, or pyruvate?
4
Pyruvate as a final electron acceptor in the electron transport chain
7
Why are only 6 water molecules formed in the aerobic degradation of glucose?
2
What does the presence of 6 molecules of water in this equation indicates to?