After I added the loading buffer to each, I added the 4 reaction mixtures to the polyacrylamide gel and electrophoresed for 45 minutes at 150 V. After this I placed the gel in Coomassie Blue stain for 20 minutes.

After the destaining process, I reviewed the gel to find that the calmodulin in the 4 lanes had migrated the same distance. I had expected the EDTA control to have migrated the furthest on the gel, with Ca2+ and Mn2+ migrating similar distances due to their similar ionic radii; making it a good substitute for the binding to the calmodulin. I was unsure of how far the Mg2+ would travel as I thought it would have a lower affinity to the calmodulin due to its binding to the N-terminus rather than the C-terminus. However, I was wondering if this was negligible in the absence of Ca2+, although now I can't be sure due to the results of the gel.

I was wondering what errors in the experimental design or process could have resulted in this? And if the experiment was run correctly, what results would be expected? 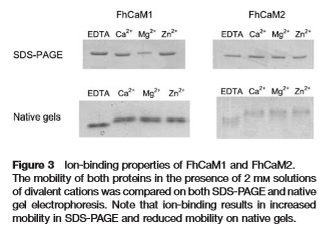 The change in gel migration distance is due to the conformational changes due to the binding of the ion, and have nothing (detectable) to do with the ionic radius of the ion.

The left image shows calmodulin with no ligand bound, and the right image shows it with calcium and peptide bound to it. 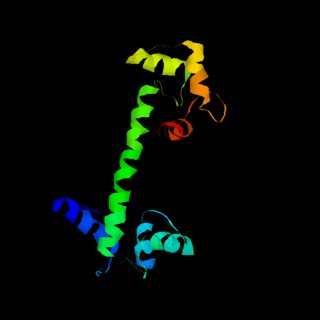 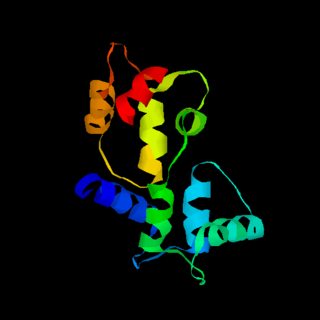 As you can clearly see, the unbound calmodulin is significantly thinner, and therefore can migrate faster through the gel. The change in charge on the protein due to cation binding in native PAGE may also affect the result.

Since the calmodulin conformational change is enhanced by both a peptide and calcium cations, as well as its phosphorylation state, it would be reasonable to investigate the contributions of these factors to your result. Reading the original paper again to see what you missed the first time may also be helpful.

Not the answer you're looking for? Browse other questions tagged biochemistry proteins gel-electrophoresis or ask your own question.