Why do some bacteria have most genes on the leading strand of the genome?

Genes in the (+) strand are black and genes in the (-)strand are red. The gene distribution in E. coli genome is somewhat expected: transcribed regions would tend to alternate with non transcribed regions, as a consequence of (random) evolutionary process. Also, genes don't overlap (it would be highly unlikely that two complementary strands both carried useful information). In B. subtilis, on the other hand, there seems to be a preference for one of the strands in each side of the chromosome. What sort of evolutionary pressure could give raise to such a pattern? I have a guess, but I'm not sure, that this may be related to bacterial transformation.

The pattern we see in B. subtilis is quite common in prokaryotes. The origin of replication is shown at the top of the genome diagram. DNA replication proceeds bidirectionally from this point. In the B. subtilis diagram, most genes are located along the leading strand in each direction. Even in E. coli, by the way, important genes, including all rRNAs, tend to appear on the leading strand.

Why is that? Rapidly growing bacteria are replicating their genomes most or all of the time, so you've got replication and transcription happening at the same time. If genes are on the lagging strand, RNA transcription proceeds in the opposite direction from DNA replication, and the DNA polymerase will often collide with the RNA polymerase. If the genes are on the leading strand, however, RNA transcription proceeds in the same direction as replication and collisions are minimized. Hence the selective advantage to positioning most genes along the leading strand.

Some genes may also be on the lagging strand in order to target them for mutagenesis (Paul et al. 2013, Million-Weaver et al 2015). This goes back to the concept of transcription-replication collisions where the head-on collisions are worse than co-directional collisions. Head-on genes actually have a higher mutation rate and incidence of convergent mutations which suggests that they are mutated and evolve faster than leading strand genes. This is a controlled process in that it only occurs in lagging strand genes, and only when the gene is transcribed (i.e. when it is needed). It was argued that this is a way bacteria can control and ratchet up or down the rate of evolution in a controlled way. This was argued against by Chen and Zhang based upon computer based modelling. It is an interesting concept that has been hotly debated.

EDIT for additional clarification and references:

This diagram from Chen and Zhang (2013) helps show what is going on: 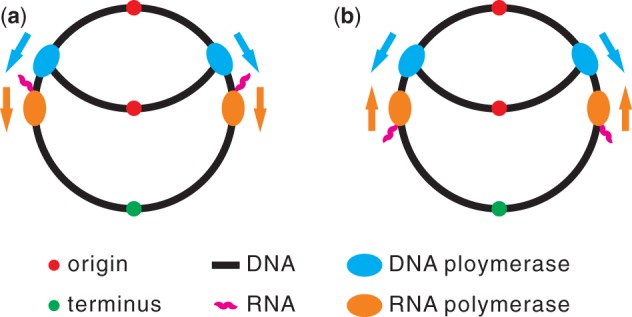 Not the answer you're looking for? Browse other questions tagged molecular-biology bacteriology molecular-genetics genomes polymerase or ask your own question.

8
How can E. coli proliferate so rapidly?

7
Why do different bacteria have different shapes?
5
Why do cells vary in shape and function when they have the same genome and the same organelles?
8
Number of transcription factor genes in the human genome
10
What is the strand specificity of a reference genome?
1
"Most bacteria have at least one cell wall"
10
Why did scientists think humans had 100,000 genes (before the Human Genome Project)?
7
Which is the most extreme thermophilic bacteria known?
3
Does DNA ligase have any role to play in replication on leading strand?