To understand why satellite cells are genetically inactive in Barr body

In the slide of a normal human female cheek's somatic cells, there is apparently no other clear dark spot inside the nucleus than the Barr body against the nuclear inner membrane. - - I used an old microscope so my observation may be wrong as pointed in the comment.

How can you deduce from the given slide that the spot really contains inactive satellite cells that are not used genetically?

DAPI (4',6-diamidino-2-phenylindole) preferentially binds AT-rich DNA (although it binds CG-rich DNA, too), which can give chromosomes distinctive banding patterns if they are polytene or in metaphase. In interphase condensed chromosomes, such as the inactive X chromosomes of female mammals (Barr Body), the relatively high concentration of tightly-packed DNA makes the chromosome appear as a brighter spot in the nucleus. When the DNA of a chromosome is decondensed (such as the rest of the chromosomes in interphase), it appears as more-or-less homogeneously stained DNA in the nucleus.

A great picture is here (see below), A is the DAPI staining, B is a protein localized to the Barr Body, C is the RNA (Xist) which binds the Barr Body. 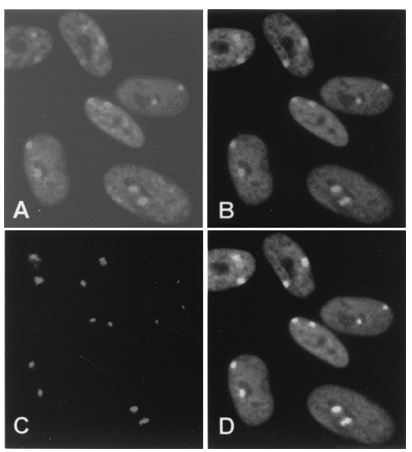 Since the active X is not condensed, it appears as do the rest of the chromosomes, so cannot be identified among the mixture of autosomes. The difference in DAPI appearance has nothing to do with activity per se, but rather differences in how tightly packaged the chromosomes are.

I do not understand the first part of your question, though. You cannot tell from a still image that the Barr Body is relatively inactive. If your were doing experiments on live cells, you could measure RNA production (using a labeled nucleotide), immunofluorescence to show localization of e.g. RNA Polymerase, or reporter genes located on the inactive versus active X chromosomes. If you clarify your question, I can answer better.

24
How many human cells are there in our body, on average?
3
Why are embryonic germ cells considered stem cells?
2
How to measure the total number of cells in an average human body?
31
Why do tattoos persist if body cells are regularly renewed?
2
Are (muscle) satellite cells the same as muscle stem cells?