How to correlate the pattern by which CAP activator from E.coli binds to DNA and its mechanism of action?

The catabolite activator protein (CAP) activates the expression of more than 100 genes involved in secondary sugar metabolism in E.coli. Apparently, it always binds in sites that are away from -10 and -35 elements of the promoter by multiples of 10 base pairs (-70 or -60, for example). How could this be related to its mechanism of action?

I've searched about this particular activator and I found that it acts mainly by recruiting RNAP to weak promoters, although it does alter the architecture of the DNA, introducing an abrupt bend (for some CAP-dependent genes, this favours conformational changes in RNAP involved in the initialization of transcription): here's the crystallographic data.

However, I did not find anything conclusive about the pattern of binding to distances which are usually multiple of 10 base pairs (which is close to the number of base pair in a complete turn of the double helix).

I found a great article that might help. To summarize the contents of the article, there are two classes of CAP dependent promoters/genes, and the distance of the CAP bindings site in these classes are different. Also the actions in which CAP is involved are different in the two classes of promoters. In the first class it does not overlap with the promoter region and is only involved in RNAP recruitment. In the second class it overlaps with -35 element of the core promoter and is involved in multiple interactions. So the binding distance of the CAP is determines what interactions is it involved.

You can see the difference between the two classes on the picture below (taken from the article i linked). And I think this answers your question on why the patterns are multiples of ten - because this is the space needed for alpha-CTD to make a bridge between the protein complexes, or the CAP to interact with the RANP complex. 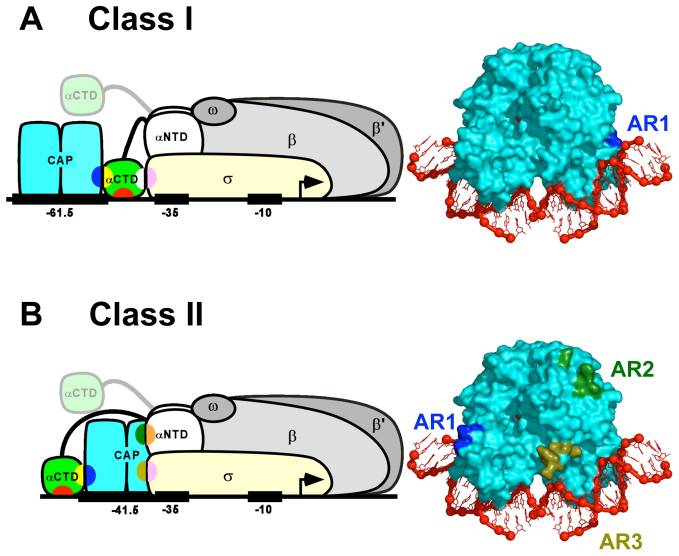 I only took a glance at the paper I linked and quickly extracted the info, but I hope it still helps

Not the answer you're looking for? Browse other questions tagged molecular-biology molecular-genetics gene-expression or ask your own question.

6
How do I prepare and clone from E. coli DNA?
8
How is the exogenous DNA protected from degradation during bacterial transformation?
7
In DNA repair, how is it determined which strand contains the error?
27
How does RNA transcription determine which half of the DNA to use?
4
Microsatellites and Minisatellites: Which of these form the basis of DNA fingerprinting?
2
Do proteins contain phosphorous? If its true then how alfred hershey and martha chase used the statement that proteins do not contain phosphorous?