When is the second polar body extruded from the egg nucleus?

Only when MPF is present, stabilized by CSF, and active will the M phase persist. However, this complex is very sensitive to calcium, such that a rise in calcium tilts the equilibrium away from complex synthesis towards destruction. 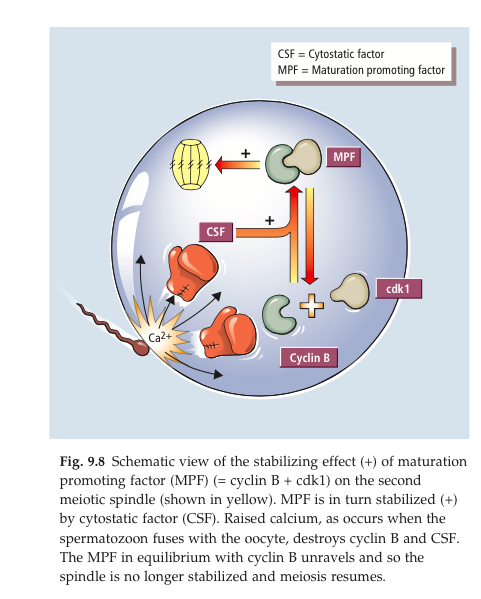 Capcitated spermatozoa that have undergone an acrosome reaction is capable of fusion and Calcium mediated calmodulin is required for this process. When fusion happens spermatozoon ceases to move and the nuclear with parts of mid piece and tail passes to the ooplasm. So sperm initiate Calcium release at fertilisation this helps in the completion of the 2nd meiotic division. For further detail on these processes you could read the article Penetration, Adhesion, and Fusion in Mammalian Sperm-Egg Interaction Increased Calcium activated Calpain (calcium dependent cysteine protease which causes CSF to disappear thereby activating APC/C which in turn causes dissociation of MPF. This results in completion of 2nd meiotic division.

For further details I recommend you to read Johnson and Everitts Essential Reproduction (6th edition), cell cycle chapter in The cell by Bruce Albert (5th edition) 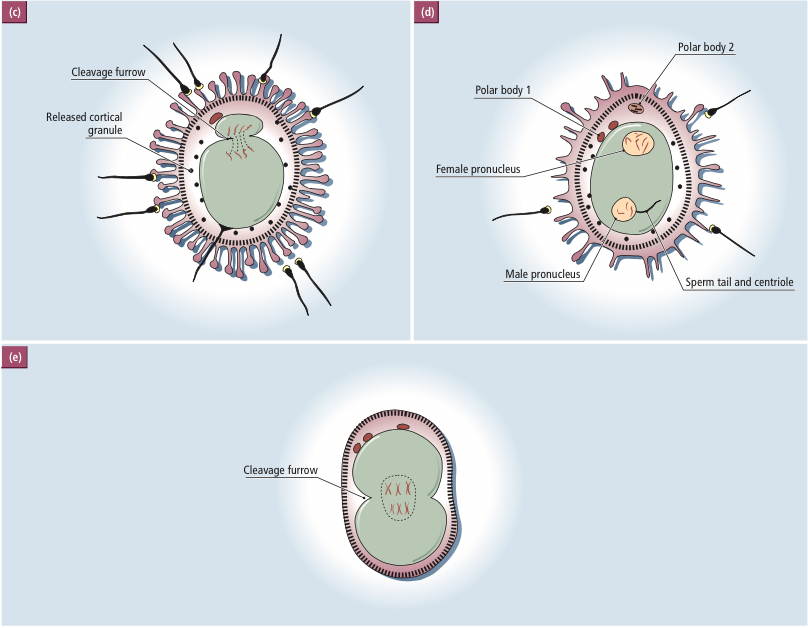 During oocyte–sperm fusion and second polar body expulsion, the cytoplasmic contents of the sperm cell membrane (now fused with the oocyte membrane) pass into the oocyte cytoplasm. Between 4 and 7h after fusion, the two sets of haploid chromosomes each become surrounded by distinct mem- branes and are now known as pronuclei (see Fig. d). The male is usually the larger of the two. Both pronuclei contain several nucleoli. During the next few hours, each pronucleus gradually moves from its subcortical position to a more central and adjacent cytoplasmic position. During this period, the haploid chromosomes synthesize DNA in preparation for the first mitotic division, which occursabout 18–24h after gamete fusion. The pronuclear membranes around the reduplicated sets of parental chromo- somes break down (see Fig. e), the mitotic metaphase spindle forms and the chromosomes assume their positions at its equator. The final phase of fertilization has been achieved: syngamy (or coming together of the gametic chromosomes) has occurred. Immediately the first mitotic anaphase and telophase are completed, the cleavage furrow forms, and the one-cell zygote becomes a two-cell conceptus.

Polar bodies will usually undergo apoptosis in about 17 to 24 hours after the egg forms (the final stages of telophase II (cytokinesis)) because they have relatively little cytoplasm and shunted organelle development (Schmerler & Wessel, 2011).

Not the answer you're looking for? Browse other questions tagged reproduction oogenesis or ask your own question.

3
How do you see the stage of the second meiotic arrest in oogenesis in the given video?
4
Is secondary follicle or Graafian follicle arrested in the second metaphase of oogenesis?
5
The probability of indirect human fertilization?
2
Surrogacy Post Fertilization
2
How the pattern of fertilization path is determined before the cell division to form the blastocyst? Is it individually specific?
0
When do 3 germ layers form in embryo? And why is there only one mature egg formed?
1
Resting stage of primary oocytes
9
Can only fully matured sperm fertilize an egg?