Are both (partial) copies of DNA transcribed in S and G2 phases of cell cycle?

For a little less than half the cell cycle, a significant number of genes are represented twice (just before dividing). Does the cell differentiate between these DNA in any way or are transcription rates limited by the amount of polymerase anyway?

I can't unequivocally say, at least without further literature review, that both sister chromatids are transcribed equally everywhere, especially since the cell does have mechanisms to differentiate between the old and new DNA strands (such as methylation state). It would be conceivable to expect, however, that the same regulatory factors that were present before replication have the same effect on newly synthesized DNA as they did on the old. Here are some electron micrographs showing transcription from both chromatids at some locus.

Here you can see RNA (solid line in schematic, b) of increasing length branching from both sister chromatids (dotted line):

A similar image but this time showing the replication fork (arrow): 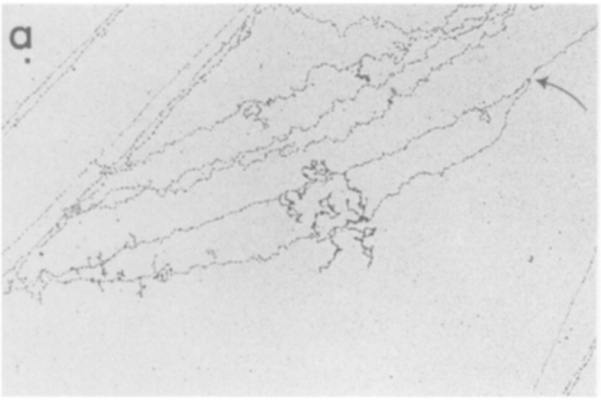 This image shows RNA free gaps (arrows) in a single transcription unit, which are symmetrical between the two chromatids:

From which they conclude:

Not the answer you're looking for? Browse other questions tagged dna transcription mrna cell-cycle or ask your own question.

23
Do apes and humans share 99% of DNA or 99% of genes? What is the difference?
2
Complementarity of cDNA
13
“Same” DNA vs genes
2
Do human somatic cells have 46 chromosomes all the time?
4
Is there selection against long proteins and long genes?
1
Cell cycle-regulated genes and mRNA
2
What makes/breaks the hydrogen bonds between DNA and RNA during transcription?
4
How do enhancers induce transcription?