Are unilaterally deaf people able to determine where sound comes from?

My question is on people deafened in one ear, but normal hearing in the other.

Time and level differences between the two ears are only part of how the human body can localize the source of the sound. So what other factors are there and are they enough to help accurately determine the location of the sound for unilaterally deaf people ?

From what I could gather, there is a decent amount of variability in the ability to detect which direction sound is coming from in unilateral hearing impaired people. It would appear that some people have severely impaired localization skills, akin to someone with an earplug in one ear, but others can use their monaural hearing cues to better locate sound.

Monaural cues seem to be based on the structure of the outer ear as well as how the sound bounces off of the head and shoulders.

Background
The two most important mechanisms used to localize sounds can be grossly divided into localizing sounds in the horizontal (azimuth) and vertical plane (elevation).

In the horizontal plane it is the exquisite capability of the auditory system to distinguish between slight intensity, latency and phase differences between the two ears that allow the brain to deduce where a sound is coming from. For low frequencies it is mainly the inter-aural time and phase differences that play a role. For high frequencies, the difference in sound level between the ears becomes more important (head-shadow effect). For example, if a sound is coming from the left, the left ear will receive the highest sound level. The sound stimulus will also have a shorter latency because of the intervening head tissue, and a phase difference due to the time lag (Van Wanrooij & Opstal, 2007). 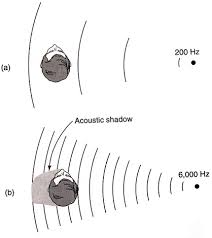 Head shadow effect at high, but not at low frequencies. Source: University of Edinborough

In the vertical plane and front-back discrimination it is the analysis of spectral shape cues that lie at the basis of directional hearing. The spectral cues arise from direction-dependent reflections within the pinna (described by so-called head-related transfer functions, see below figure graphs). The pinna provide a monaural localization cue for sound frequencies exceeding about 3–4 kHz (Van Wanrooij & Opstal, 2007).

Head-related transfer function due to the pinna. Source: University of California

However, this hard distinction between elevation and azimuth directional analysis is somewhat simplified, as it appears that elevation is also analyzed in terms of binaural cues, and azimuth is also identified using monaural cues. Hence, all available cues seem to be integrated for both vertical and horizontal localization. Nonetheless, the two distinct pathways are the primary and preferred ways of the auditory system to determine elevation and azimuth. However, when one ear is plugged, or in unilateral deaf people, the textbook binaural hearing in the horizontal plane may be substituted by monaural cues, and I quote from (Van Wanrooij & Opstal, 2007):

[L]isteners rely on monaural spectral cues for sound-source azimuth localization as soon as the binaural difference cues break down.

Therefore, to wrap up, unilateral deafness degrades directional hearing and in particular in the horizontal plane. However, the use of monaural cues may still allow localization of sounds in the horizontal plane in unilaterally deaf subjects, albeit less effectively than normal-hearing subjects using binaural hearing (Van Wanrooij & Opstal, 2007).

Not the answer you're looking for? Browse other questions tagged human-biology neuroscience neurophysiology hearing or ask your own question.

6
How can we tell which direction sound is coming from?
5
Does prolonged exposure to low pitch but low volume noise affect hearing or stress?
5
Why do human ears have a lower boundary for the lowest energy perceivable signal than eyes?
6
Do our ears or brains gradually adapt to noise pollution?
5
What is the biological limit on hearing resolution?
4
How we can localize sound vertically (up-down) and front-to-back?
3
How much does hearing deteriorate with age?
3
Is the masking effect of sound related to action potentials or to mechanical aspects of hearing?
3
Can a brain process auditory signals at 18 weeks of human development?