Is there a biological neuron that spikes in response to hyperpolarizing currents?

As some background I've been building Electrophysiological models of neurons, and in the process stumbled upon a model, that in all respects is biologically plausible, but has a bizarre property I didn't think happened in nature. It spikes in response to hyper polarized currents.

My particular model has only one ion channel which is has similar properties to Hodgkin-Huxley's transient sodium channel. It has one activation gate and one inactivation gate. The reason I only use a single Ion Channel was I was exploring If I could create a minimal spiking neuron with just a single channel. The answer is yes, but has different properties then I expected.

I know that Depolarization block can occur, my current isn't that High, in fact its no current produces no spikes. It has a normal rest potential around -55 mV and Fires upward to about +40 mV.

Also note that If I change the parameters around I get a more normal neuron that spikes in response to depolarizing currents. So the property must be somehow related to the ion channel kinetics.

The question is: Are there biological neurons that spike when hyper-polarizing currents are injected?

I was doing some more research and stumbled upon this paper here by Dr. Izhikevich that describe neurons as a system that can exhibit resonance. The author built a model that he calls the resonate and fire, which is a linear piece-wise model of a neuron.

Following some of the citations in the article (found here), apparently thalumus neurons can exhibit resonance and thus theoretically can fire in response to the right frequency of input. However it is important to note that they thalamic neurons are close to threshold, and are not receiving the double inhibitory input that Izhekivich talks about in his paper. The second paper uses a ZAP protocol.

A Zap protocol is injecting a Sine wave into a neuron and slowly change the frequency linearly in time.

The only ion channel I am aware of that may mediate a hyperpolarization-induced cation influx resembling that seen in VOSCs is the hyperpolarization-activated cyclic nucleotide-gated (HCN) class of channels. The associated current (Ih) is a non-specific cation flux (Na+, Ca2+). The HCN channel opens when the membrane potential hyperpolarizes. Thereby it generates a relatively small positive, depolarizing influx current. it is mainly involved in setting the frequency of pacemaker activity in, e.g., thalamic relay neurons that are involved in the oscillatory cortical activity characteristic of slow-wave sleep. However, Ih itself does not elicit spikes, it generates excitatory postsynaptic currents (EPSCs) associated with excitatory postsynaptic potentials (EPSPs), but not full blown spikes (McCormick & Pape, 1990). 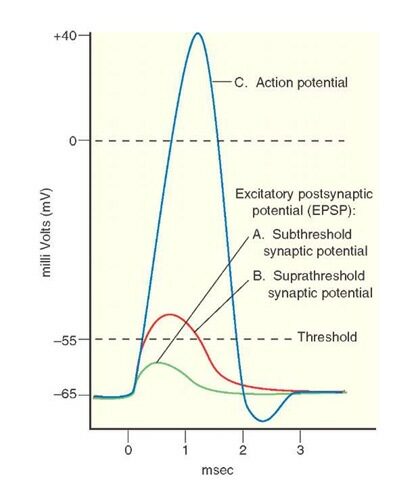 Action potential versus EPSP. Source: What when and how

10
Is there a biophysical causation from local field potential (LFP) to spikes?
9
Is there a biological basis to physical attraction?
5
If the average resting potential of a neuron is -70 mV, why is there such a high ratio of potassium ions inside relative to out?
6
Are there neuron mediated reactions faster than reflexes?
0
Understanding Hodgkin-Huxley's model and activation variables
7
Are there any known rules that neurons always follow while transmitting/receiving signals?
6
Are there any organisms, extant or extinct, that have only one neuron?
5
Hodgkin huxley neuron not spiking consistently for currents greater than threshold?