Why are skin tactile receptors considered to be phasic receptors?

A phasic receptor by definition is one that quickly adapts to change. In terms of neuron firing, this means that it does not trigger another firing because the receptors are used to the stimulus.

But when I place my fingers on my arm, I continuously feel pressure. Does this mean that skin receptors are only phasic in the sense that it will fire as soon as it is touched and does not prolong this touching sensation? 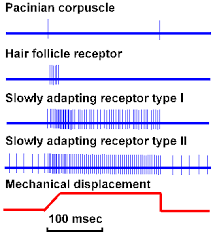 Not the answer you're looking for? Browse other questions tagged neuroscience skin neurophysiology receptor or ask your own question.

7
What features cause mechano sensory adaptation?

1
Molecular cause of cramps, spasms and strengthening in muscles? (incl. intro to muscle contraction)
9
Are sensory receptors neurons?
6
How does a change in the potential across a neuron's membrane get turned into a signal that is sent down the axon?
6
Can the dendrites of sensory neurons be a meter long?
0
How do afferent mechanoreceptors work on the finger pads?
2
What are the response frequencies of sensory neurons?
5
Why is the SARS-CoV-2 target receptor ACE2 not endocytosed when bound physiologically?
2
Are sensory mechanoreceptors and mechanical nociceptors the same type of neurons or are they different?