Any good website/book to understand protein folding and enzymes?

I'm looking for a good, understandable and simple explanation about protein folding, mechanisms and function, and their relationship with enzymes.

I understand that the protein is a polypeptidic chain, I know its composition, but the part that I really can't figure out is "the folding of proteins", I mean "How a straight polypeptid chain turns into a complex folded structure?"

Okay, so for introduction the 4 levels of protein structure (each level influences the levels after it):

I think the first does not need any explanation.

The secondary structure is where amino acids form 2D structures: alpha-helices or beta sheets. From wikipedia on a-helix and b-sheet

Pictures are from here, that is a great site that explains basic protein strucutre in a quite understandable way. 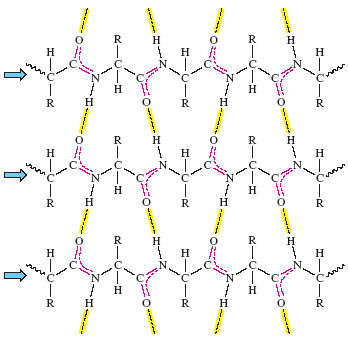 These secondary structures are important because they can from motifs with specific functions like DNA binding, interaction surface with other proteins. The aforementioned wiki sites have detailed info. These secondary structures and motifs serve as building block for higher order functions. Between motifs "loose" non-structured parts can be found to allow for flexibility.

Tertiary structure: This is the level where complex 3D geometric structure is defined. The aforementioned 2D structures are packed into domains - a single functional element of a protein. A single protein can have multiple domains and the relative position of these domains result in the tertiary structure. The domains themselves are connected with loose regions that do not show any high order structure and provide flexibility between the domains. Flexibility is necessary for conformational changes.

The quaternary structure is where non protein elements and / or multple subunits are involved. For example the positioning of the heme group in hemoglobin. Or when monomers from dimers, trimers etc. so in general when mature proteins get together to form a larger complex.

Here is a great image about the different structure levels:

As I mentioned in the beginning all levels influence the levels after it. So the amino acid sequence predestines the 2D structures to be formed. The secondary structures themselves are formed by amino acid forming hydrogen bonds with each other. This process occurs "naturrally", so by the inherent properties of the amino acids. At the third level disulfide bonds stabilize the structure. This is also a naturally occuring event. Also binding ions, co-factors, etc also stabilizes the protein strucutre.

The folding process can also be supported by chaperon proteins, These proteins can actively "twist" the polypetide chain using ATP as energy source. They can "sense" if there are hidrophobic amino acid chains facing the outer surface of the protein, a thing usually avoided because these amino acids need to face inner surface of the protein where they can avoid water - this is energetically better. This signal (outward facing hidofobic AAs) indicate that either the protein is un/misfolded or it is damaged because of for example heat - that denatures ("unwinds") proteins.

Finally the wiki page on protein folding if you need more. I hope this helps.

All the information can be found here:

The whole book is there, you simply have to search whichever part interests you or you can also find the paper version in a library. The part on protein structure is Chapter 3.

It's a textbook used in some biochemistry and cell biology introductory courses at my university, so it will cover the basics as well as some more detailed things.

For basic knowledge I would recommend the 5th edition of "the cell" and "Lehninger Principles of Biochemistry" 6th edition (3rd and 4th chapter). Even Lippincott's Biochemistry (chapter 2) and Biochemistry by Stryer (6th edition, chapter 2) is good. You can find the 5th edition of Stryer here http://www.ncbi.nlm.nih.gov/books/NBK21154/ If you have access to a library you could try out the latest editions. If not older editions are available online. Protein folding should be among the first few chapters.

IMO, this is by far the best introduction to enzyme mechanisms and protein folding, by a leading researcher in the field.

Structure and Mechanism in Protein Science: A Guide to Enzyme Catalysis and Protein Folding

7
Is it possible to isolate and analyse intermediates of protein folding?
6
Need some good resources to learn about Protein function and structure
4
Proteins in water vs proteins in crystal
1
Relation of conformational entropy and protein folding
3
Is Sda a protein, or is it a protein domain of DnaA?
2
Why does it matter to predict protein structure?
0
Protein folding
0
Predicting protein folding with Alphafold