where $p_0$ is the initial frequency and $N$ is the population size.

From their work, can we generalize this result to calculate the expected time to reach a frequency of $p_1$ (given that this frequency will be reached at some point), where $p_1$ is not necessarily equal to $1$?

I have written a computer function which simulates neutral evolution to solve this problem. It's not an exact mathematical answer, but it is basically the same approach as Kimura and Ohta took in (the second half of) their paper, except that my computer is more powerful than their one, so I could get far more precise estimates by simulating more populations than they did. 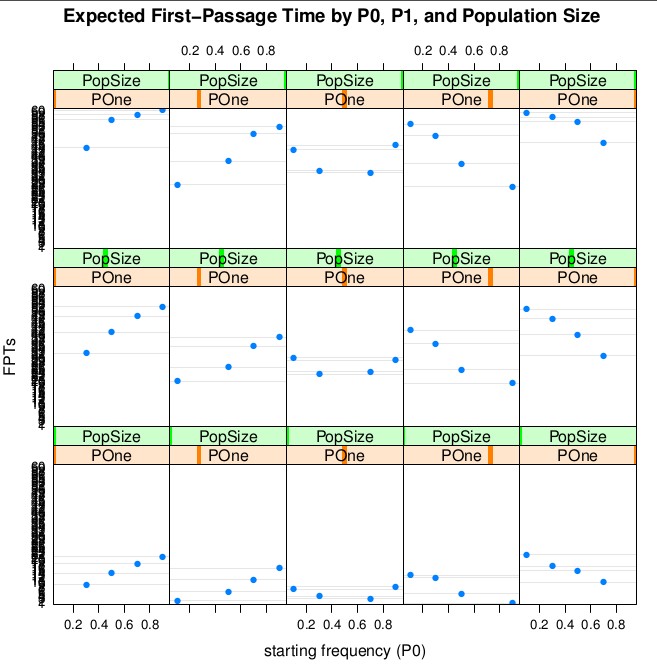 Some populations take longer than others to go from P0 to P1. Generally, most populations take a small number of generations to reach P1, and a smaller number take a long time – but a very few can take a very very long time.

I've attached my code, so if you know how to use R you can use it to estimate the expected time to get from P0 to P1 for any combination of P0, P1, and population size.

Additional details and assumptions for the technically inclined:

In a diploid, sexually-reproducing population of size $N$, there are $2N$ copies of a given locus. Each locus is occupied by some allele. All variation at our locus of interest is selectively neutral. For our purposes, we can consider that each locus is occupied either by our allele of interest ($A$), or another variant ($a$), ignoring variation in the 'other' alleles. The number of copies of $A$ in the population at the start of the process, $A | t=0$, is given by $2N*P0$.

Let us assume that population size is constant ($Nt+1 = Nt$ for all $t$), and that mating is random. Let us further assume that generations are distinct. Let $t = 1$ be the first generation born, and so on.

The expected number of copies of $A$ at time $t+1$ then follows a binomial distribution:

Since we have a transition rule for $At → At+1$, it is a fairly simple matter to simulate populations undergoing this form of evolution. I have written the R function neutralFPT to carry out this simulation and estimate the proportion of all populations which reach $P1$ at some point in their history, the expected time for a neutral allele to reach $P1$ from $P0$, given that it will reach $P1$, and the distribution of lengths of time taken to reach $P1$, given that a population will reach $P1$. The script is given in the final section of this answer.

Function: neutralFPT, with examples of use.

Not the answer you're looking for? Browse other questions tagged evolution natural-selection mathematical-models population-dynamics population-genetics or ask your own question.

6
Probability of Extinction under Genetic Drift
6
Simulating substitution rate of neutral mutations
4
Fixation rate at neutral loci
3
Is the fixation rate always equal to the mutation rate for neutral alleles?
2
Why is the probability of fixation of an allele equal to its frequency?
12
Discrepancy in time for genetic differences between human and chimpanzee to accumulate