I've seen spike, huge spike. And I thought that development of such spikes could be contrary to the evolution theory. 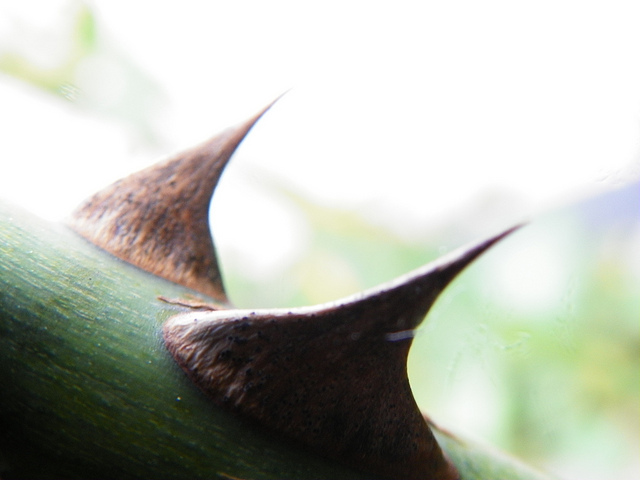 Being „little more” spiky doesn’t give you any advantage... So those individuals having one won't have smaller mortality rate than those with smooth stem. Even more, the individuals with bulgy (more spiky) waste resources their ruggedness and have more things to feed, which should mean that they would have higher mortality rate.

So I can see no way to develop spikes on the stems of roses according to the evolution theory which embrace "small improvement". Spike is only efficient (to deter aggressor) when it's very sharp, it's either sharp or it isn't - there is little in between.

Could anybody tell me that this is bullshit (and why it is bullshit), and that I should us believe in Darwin competence?;)

I think that the most important point has been given by CactusWoman, when (s)he says "Just because you cannot forsee a use for more "bulgy" spikes doesn't mean there isn't a use for them."

In addition to that, I would like to say that several plants evolved traits that were beneficial at a time where other herbivores existed and that are now useless. Those lineages did not lose their traits (yet?) just because there is a relatively low cost to making the trait in question.

Your post shows several of the very common misconception about evolutionary processes. Evolution is not all about Natural Selection. It is more interesting than that.

The conception that evolution proceed through "small improvements" is either partially wrong or totally wrong.

First, because of the loaded term "improvement". Evolution can yield a population to have a lower mean reproductive success or a lower complexity, things that you could eventually see as deterioration.

Second, because changes not need to necessarily be small. Some mutations have a very big effect.

Third, because even small deleterious mutations can spread in the population and reach fixation (=and all individuals carry this mutation), just because of the joint effect of other evolutionary processes such as genetic drift. This post may help you to get a quick grasp of what genetic drift is. There are already multiple posts that emphasize the importance of other processes than natural selection in evolution to layman. Here is one of them.

Evolutionary biology is not anymore Darwin's evolution theory. It is way more than that. We've been working on the subject a lot since Darwin and today we have a much much better understanding of evolutionary processes than Darwin at its time. Everything is not fully understood yet and therefore there are still many people researching to better understand evolution. Of course, not to better test if evolution is true as this has been known for a long time now.

Just because you cannot forsee a use for more "bulgy" spikes doesn't mean there isn't a use for them. Furthermore, natural selection isn't about producing perfect organisms, it's about selecting for traits that are "good enough". There is also more to evolution than natural selection. The phenomenon of genetic drift can cause a neutral or slightly maladaptive trait to become fixed in the population.

In short, not every single trait is adaptive. Check out the famous paper The Spandrels of San Marco if you want to read more. It talks about how we shouldn't focus on trying to come up with an adaptionist theory for every trait and instead consider that other agents of evolutionary change, such as genetic drift, can generate non-adaptive traits.

Not the answer you're looking for? Browse other questions tagged evolution botany plant-anatomy or ask your own question.

60
Why don't mammals have more than 4 limbs?
7
Why is the strength of genetic drift inversely proportional to the population size?
6
Selection Pressure on Orca Whale Coloration

6
Is the theory of evolution being disproved by bats?
2
Advantage of being deuterostome
1
Does Darwin's Theory of Evolution refute Terence McKenna theory "Stoned Ape" theory of human evolution?
8
Why does music give you emotions?