Is the theory of evolution being disproved by bats?

For some species the Darwin's theory evolution makes perfect sense. I can easily imagine how, for example, the giraffe has evolved to its current appearance: the natural selection was favoring individuals that could consume more vegetable food from trees using longer necks, and some individuals were getting at birth necks longer than average by pure genetic randomness and the long neck trait was being propagated to descendant individuals by means of genetic inheritance. I have no problem with understanding this kind of evolution.

Now let's have a look at the bat and its relatives. The bat is one of the few mammals that have something to do with flying and the only one that took flying to the bird level. Paleontologically, first mammals date to the dinosaur era and initially looked similar to the present-day shrew (which looks much like a mouse). The question is: how in the world prehistoric mouse-like creatures could grow wings over time? It impossible to believe that some mouse-like individuals were getting wing-like limbs by mutation and the "wings" were growing out accompanied with the knowledge of how the "wings" can actually be used. Ok, then maybe first wings were tiny moth-size wings and then grew larger? But where natural selection would come into play in this case? Such mouse-like individuals would have no advantage over their wingless relatives and thus would not be able to transfer those wing-growing genes to their descendants, quite the contrary, such individuals with useless mutations that interfere with their ability to walk would be suppressed by natural selection and therefore "weeded out".

So what is the story behind the bat's wings and is the Darwin's theory really able to support it?

Take a look at this little fellow: 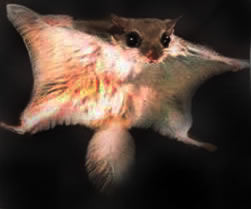 It's a flying squirrel — a shy little nocturnal rodent which lives in trees and, despite its name, does not actually fly. It does, however, have a skin membrane called a patagium between its fore and hind limbs which allows it to glide from tree to tree and thus evade ground predators.

It's not hard to see how the flying squirrel's patagium may have evolved: after all, ordinary squirrels, to which the flying squirrel is indeed related, also spend most of their time in trees and avoid the ground, often performing quite impressive leaps to cross from one tree to another. With sufficient pressure to minimize time spent on the ground, any little morphological changes that allowed longer leaps would be favored by natural selection.

Indeed, there are plenty of other groups of mammals which have independently evolved very similar adaptations to gliding. Given how many small arboreal mammals there are, this is perhaps not surprising. What's special about bats is not the fact that they possess flight membranes — it's that they're the only group of mammals, so far, to have taken the next step to actual powered flight.

Check out this famous paper by Gould and Lewontin, the Spandrels of San Marco. It's essentially a criticism of your question as it's not really the right question to ask. You're engaging in what they call "adaptive storytelling". The truth is that barring fossil intermediaries it's almost impossible to infer how a species transitioned from primitive ancestors. Secondly you're assuming constant selective pressure over time. It certainly can be the case that traits evolve in certain environments but are conserved over time despite no longer serving their original function (why do flightless birds have feathers still? etc.).

Perhaps you didn't realise that bats' wings are equivalent to the front limbs of other mammals? They aren't extra limbs, just adapted ones, and the wings are formed from flaps of skin between the 'fingers'.

Taking that into account, I don't even see how anyone can think this is a challenge to the theory of evolution. It's obvious that increased skin webbing between fingers, eventually combined with increased finger length, provides an adaptive benefit to tree-dwelling small mammals. Initially it gives increased air resistance to allow controlled falling, then to allow gliding (like in flying squirrels), and in the most extreme cases to allow flying.

Not the answer you're looking for? Browse other questions tagged evolution genetics zoology or ask your own question.

15
Evolution of long necks in giraffes
0
How does the modern synthesis theory explain the evolution of birds from dinosaurs?

15
Is there a biological mechanism for evolution encoded into our DNA?
2
Finding for evolution, comparing past flower numbers with present
4
Why are two-winged animals much more common than four-winged?
0
Is natural selection actually random?