I am not a biologist and I would love to understand what is going on with this pathway.
I went to the description but it's still complicated, and I couldn't follow. Can someone please help me with it? Is this a comprehensive pathway or is it based on specific details? How do i read this pathway?

So if you're reading the flowchart, understanding the notation of the arrows is important:

The pathway is kind of broad but it provides some mechanisms for tumorigenesis from two standpoints: chromosomal instability, and microsatellite instability. The pathways we're seeing promotes the tumor development by upregulating proliferation signals, and downregulating apoptosis pathways. There's bound to be more to it, especially since we see other players involved when we get into cases like metastasis like snail1/2, Met, Src, etc. Below is a survey of apoptotic pathways from Nature, with pro-apoptotic in red, and pro-survival in green:

Ignoring the therapeutic targeting jargon, you can see that when growth factors bind, the cell generally pushes towards a survival state. When death factors bind or something goes wrong, the cell pushes toward an apoptotic state. Cancers, however, are intrinsically disregulated: 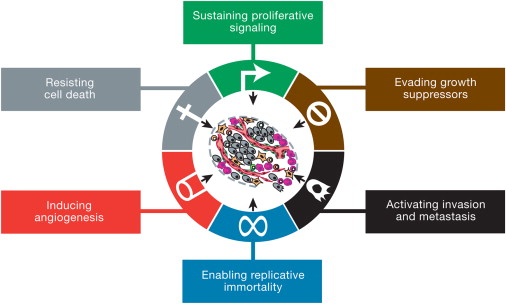 They have methods of overstepping their boundaries as cells, which is what makes them problematic. The general conclusion I'd draw from that KEGG pathway, though, is that many pathways need to be disregulated to end up with colorectal tumors, and the method of disregulation is (a) downmodulated mismatch repair, and (b) chromosomal aberrations due to duplication, etc. Andkeeping in mind the box of oncogenes vs tumor suppressors in the corner: "An important difference between oncogenes and tumor suppressor genes is that oncogenes result from the activation (turning on) of proto-oncogenes, but tumor suppressor genes cause cancer when they are inactivated (turned off)"

Pathways in biology are very hard to interpret without being an expert in the subject. Here a link to The Standard Graphical Notation for Biological Networks that might help you understanding the notation used.

Pathway are generally based on evidences of links between the players. These links do not require to be found using one particular technique. Those evidences could come from genome-wide association studies (GWAS), RNA-seq, functional assays, receptor based assays, clinical data etc.. just to cite a few.

Not the answer you're looking for? Browse other questions tagged human-biology cell-biology cancer database pathway or ask your own question.