Epistasis Across Chromosomes and Individuals 'Homozygous for Interactions'

Apologies for any failures in nomenclature. I'm a mathematician who is making a foray into genetics for a masters thesis. Specifically, I'm generating artificial diploid genetic sequence data and phenotype data based on known epistatic interactions.

I am familiar with the concept that having multiple copies of a single allele (e.g. one from each parent) can actually increase expression and thereby change the quantitative phenotype (at least in some cases?). Can this also happen with epistatic effects? For example, consider the case that locus 1 ($L_1$) and locus 2 ($L_2$) exhibit some positive interaction ($\beta$) on the trait ($Y$). $$E[Y]=\mu+\beta(L_1L_2)$$ If both chromosomes contain the allele in question at both loci, then does this individual exhibit more of a trait increase than if he only had one chromosome with the epistatic alleles?

Question 1: The phenomena you describe in which it matters whether you have one or two copies of an allele (e.g., the AA phenotype being different than the Aa phenotype) are known as dominance effects. Dominance effects can interact with epistatic effects (in which the phenotypic effect of one locus depends on the genotype at the another locus). 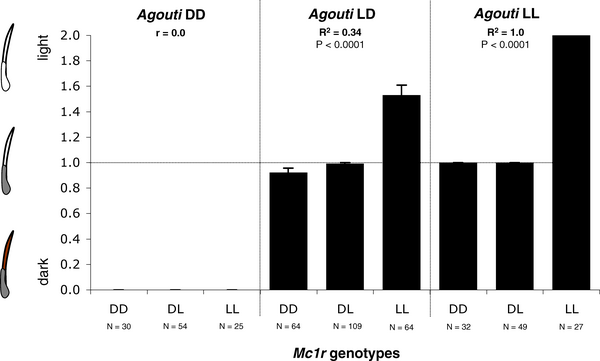 Not the answer you're looking for? Browse other questions tagged genetics bioinformatics gene-expression chromosome quantitative-genetics or ask your own question.

4
How are new chromosomes replicated into the next generation via sexual reproduction?
4
Epistasis Involving Multiple Loci
9
Genotype to phenotype map and the G-matrix
2
Recessiveness of allele for protection of organism
4
Can difference in the expression potential of alleles lead to dominance?
5
Difference between null and recessive allele?
1
Do alleles, by definition, code for the same trait?
1
Sex linked genes?
0
Zygosity and Strands
1
Is it possible for a sex chromosome to be homologous?