Do you know of ways that help a plant to produce more flowers? 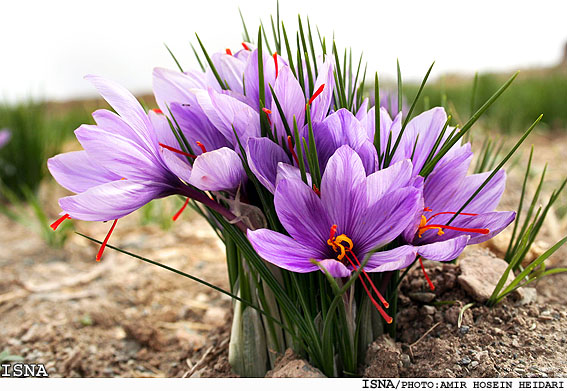 In Crocus sativus, or saffron crocus, the most commercially important part is the stigma of flowers. Each plant produces one flower (so there is more than one plant in this picture) and each flower has three stigmas (stigmas are red in this picture). What are the possible mechanisms to produce more stigma in a plant for commercial cultivation?

Each species of flowering plant produces a set number of floral parts, more or less. Having three styles and three stigmas per flower is a trait that is determined genetically. Mutations can cause floral parts to be duplicated. Heirloom tomatoes have mutations in the fascicated and locule-number genes, resulting in more locules being produced per fruit. Mutations in the fascicated gene also cause increases in other floral parts, such as petals, sepals, and stamens. If you compare a regular tomato to an heirloom, you'll notice that heirlooms tend to have around 10 petals and sepals compared to a regular tomato's 5.

Now the question is, do such mutations exist for Crocus sativus? A quick Google search didn't turn up anything other than the normal three-stigma flowers, so it doesn't look like such a mutation is common, if it exists at all. My answer to your question is: there is no easy way to get a saffron flower to produce more stigmas, for if such a method existed, everyone would be using it. I don't doubt that a dedicated botanist could come up with something (crossing with a related species, perhaps), but it's not something you can likely accomplish in your home garden.

Edit: User Sleepses found an article where a high-yielding mutant with 5 stigmas was obtained through gamma radiation mutagenesis. I'm not sure whether or not this mutant is for sale commercially, though.

One way getting most attention is re-deriving Crocus sativus again.

Crocus sativus (with autotriploid chromosomes) is derived from Crocus cartwrightianus (diploid). ref for this is https://www.sciencedirect.com/science/article/pii/S1055790319300879

This article talks about resynthesizing the triploid https://www.ncbi.nlm.nih.gov/pmc/articles/PMC4549961/

You could breed crocus relatives to have abundant and tasty flower parts. Possible ways without genetic modification could be:

Not the answer you're looking for? Browse other questions tagged botany agriculture flowering or ask your own question.

3
Do you know what plant it is?
5
What is this (seed/berry)-like object and where is it coming from?
4
properties of lamps for indoor plant growth
5
Trick fruit trees into flowering later in the spring
5
What is this plant, and is it edible?
4
Are the seeds in a single capsicum fruit genetically identical?
0
Are there organisms that "branch more" near the leaf?