How are ketone bodies used?

While searching for literature on ketone bodies, I can only seem to find how they are synthesized, but not how they are broken down. I'm looking for the series of events with enzyme names and intermediates. Does anyone have this?

The second and the third are taken up by heart and brain cells and then converted into Acetyl-CoA which is fed into the citric acid cycle where it is further metabolized. Acetone is mostly excreted. See here for some more information. 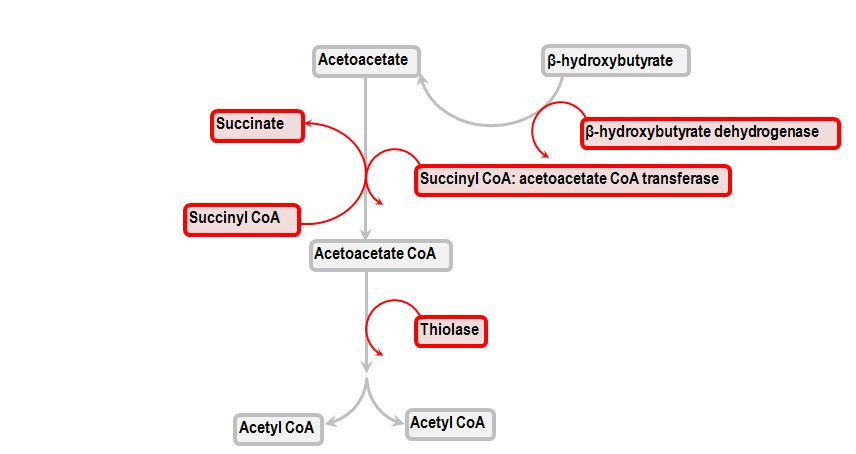 For a more detailed explanation of this process (both, the generation and the metabolization of the ketone bodies) see here.

Not the answer you're looking for? Browse other questions tagged human-biology biochemistry metabolism or ask your own question.

6
When is the lactase in lactose-free milk active?
3
Is anaerobic activity during ketosis possible?
5
Can the kidneys utilize ketone bodies for energy?
8
Why are diabetic people often overweight?
7
Is cyanocobalamin toxic?
3
Where do the four ADPs come from in the second stage of glycolysis?
1
Lifetime of secondary messengers such as Calcium or IP3
2
why is LPL (lipoprotein-lipase) down-regulated during fasting?
1
How important is getting enough glucose for maximal brain performance / cognition?