What governs the distribution of blood vessels?

Whenever someone is sick, doctor places 2 fingers on wrist & observes the heart-beat-rate by feeling pulses of a certain artery.

To me it seems the distribution of blood vessels are pretty standard across all variations of humans (I mean identical blood vessel positioning seen across Caucasians, Africans, etc. members)

So when someone is born with extra finger or joined skull - which rule/gene/algorithm decides the distribution of network-of-blood-vessels in those special parts?

PS: I am definitely / apparently not a biology student, so pardon my ignorance

Is positioning of blood capillaries random or they too are identically positioned among all humans, although we can't see them.

The growth of blood vessels is called angiogenesis. This process occures during embrional development, tissue repair, and even tumor formation (in fact this is a crucial step for tumors to survive). This Nature review ("Molecular regulation of angiogenesis and lymphangiogenesis")provides great overview of the process, I'll try and briefly summarize things:

In general large arteries grow circumferential to keep up with increased blood transfer, while capillaries branch to a more complex network in order to be able to supply blood to every cell. The circulation system starts as a

that later develop into a hiearchical system of arteries, capillaries and veins. Main regulator of the morphogenesis of blood-vessels is the

This needed for the chemotaxis (the movement of an organism in response to a chemical stimulus. from: http://en.wikipedia.org/wiki/Chemotaxis) and differentiation of endothelial precursor cells (EPCs; angioblasts), endothelial cells (ECs) and the assembly of ECs to vascular structures (termed vasculogenesis), as shown in the figure taken from the article I linked. EPCs themselves differentiate from mesodermal cells during early embryo development and aggregate to form blood islands that later form the vasculogenic formation of honeycomb-shaped primary capillary plexi. 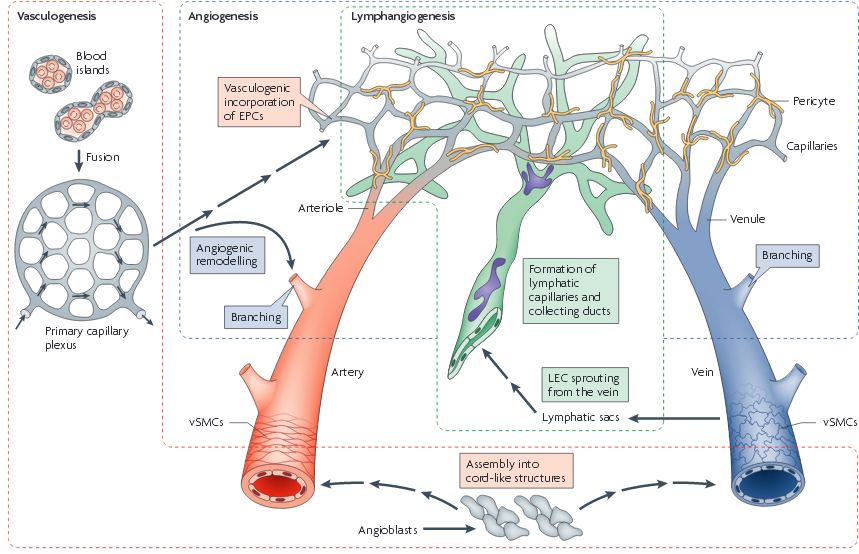 Also it is important to note that :

alternative splicing of VEGFA can generate several variants of the growth factor, including the so-called b isoforms that differ in the last six C-terminal amino-acid residues and have anti-angiogenic properties. The balance between the different VEGFA isoforms can regulate blood-vessel growth and patterning.

Also local composition of extracellular matrix (ECM) and the interaction between ECM and cells can affect angiogenesis. For example release of matrix bound VEGF is important in the regulation of the level of available VEGF. Also:

Furthermore, the physical contact between ECs and pericytes is thought to induce a quiescent, non-sprouting phenotype.

Sprouting itself carried out by the selection of some ECs in the capillary wall to lead the growth of the new sprout. See next figure also from the linked article: 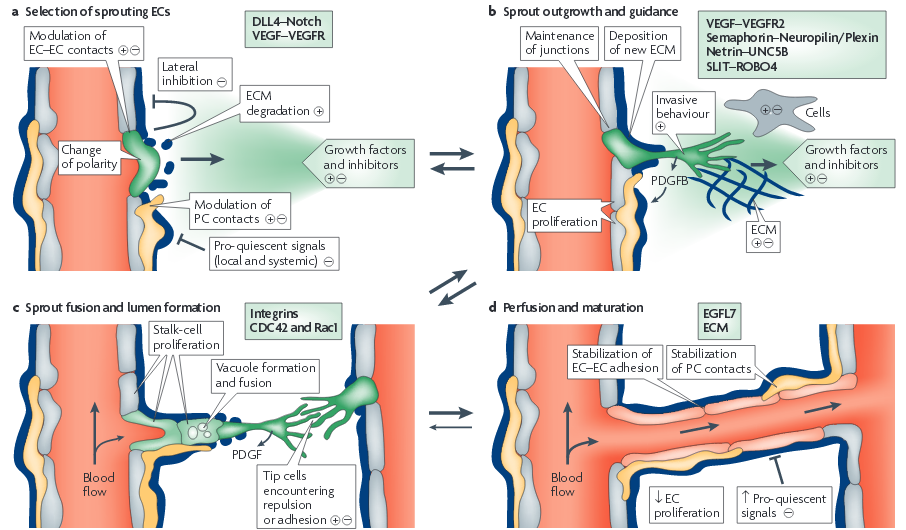 Notch receptors and Delta-like 4 (DLL4) ligands play key role in this process. In tip cell(s) DLL4 expression is induced (in response to VEGFA), while the Notch signaling in neighboring cells (activated by the DLL4) represses sprouting (by down regulating VEGFR2 - VEGF receptor 2) . This is important, because otherwise excess sprouting would lead to a dense network of capillaries and blood would just spread out too thin and would be unable to supply the organs with oxygen and nutrients.

In order to tip ECs be able to grow new capillaries they ahve to undergo some changes. Mobility is most likely gained by activated secreted or cell-surface bound proteases, to locally degrade the basal membrane. Interaction with other ECs have to be changed, without completely disrputing cell-cell junctions and the integrity of the vessel-wall. Also the apical-basal (apical side - faces the lumen of the vessel) polarity of the cells have to be reversed in order to be able to grow outwards (from the basal side of the endothelium. In order for the new capillary vessel to grow, the elongation of the new sprout has to be polarized and directional. This is achieved by spatial concentration gradient of ECM bound VEGFA isoforms along with prominent expression of VEGFR2 in the tips of sprouts. For blood functional blood vessels to be formed the tips must cease growing and exploratory phenotype when they find their target, and string EC-EC junctions need to be formed. Also the generation of the lumen of the newly formed vessel is required.

As you can see forming of new blood vessels is a complex process that is controlled by local signals, yet it is part of a bigger process - the development of the embryo and organs that is regulated by many many genes and processes. Since our general architecture is the same it is logical that or circulatory system is similar. As for the abnormal structure of a body I think perfusion of that extra body part depends on the local environment.

The review linked at the beginning of this post has extra info on arterio-venosus differention and many other things.

Not the answer you're looking for? Browse other questions tagged genetics mathematical-models biophysics or ask your own question.

30
What are the trajectories of flying insects?
2
Action Potential Distribution On Synapses
3
Population genetics and the fitness probability distribution. Why is the arithmetic mean all we need?
1
Distribution of genotypes after adverse selection
2
Kinesin-5 / cytoplasmic dynein spatial density distribution in neurons
10
What is the smallest scale at which blood vessels, nerves and other structures are deterministic?
5
white blood cells and cancer cells transport through lymphatic vessels
4
What is the substance that tumors release that stimulates growth of blood vessels but suppresses its release from other tumors?