Heterocyst function in cyanobacteria and its localization

1.What is the function of heterocyst?

2.Where it is present?

A heterocyst I think may be a protecting organ in cells!

Heterocysts are specialized, pale-yellow,thick-walled cells with disputed function nitrogen-fixing formed during nitrogen starvation by some filamentous cyanobacteria, such as Nostoc punctiforme...

Thus by definition these are not within the cells, but differentiated cells themselves.

This is a good paper that can give you details on nitrogen fixation in the cyanobacterium Anabaena variabilis.

In general: cyanobacteria are photosynthetic prokaryotes, and many of them are capable of fixing nitrogen (that is the ability to use and incorporate nitrogen from the air as N2 gas). The enzyme called nitrogenase is oxygen sensitive thus either temporal or spatial separation of nitrogen fixing must be done to avoid damage to the enzmye from oxygen produced by photosynthesis.

In Anabaena spp., aerobic nitrogen fixation is confined to differentiated cells called heterocysts that form in a semiregular pattern in a filament in response to nitrogen starvation. Fixed nitrogen in the heterocysts is transported to vegetative cells in the filament, while vegetative cells supply carbon and reductant to heterocysts

So as you can see spearate cells work together to supply each other with necessary nutrients. It is important to note that when sufficient fixed nitrogen source is available the number of such specialized formations is low due there is no need for extra nitrogen to be fixed 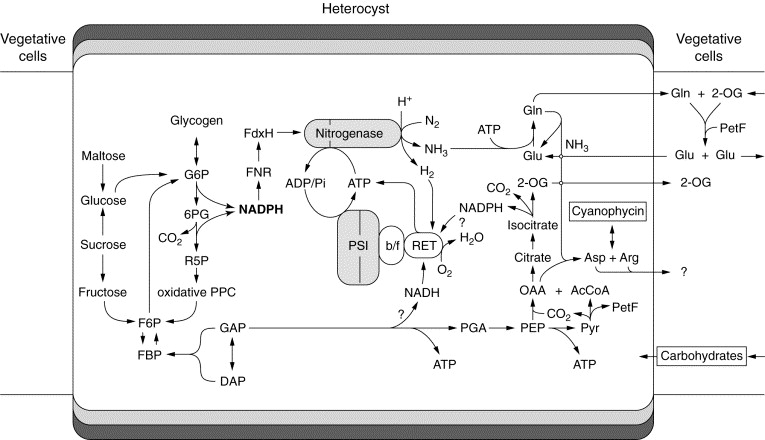 First of all the short and sweet definition of heterocyst are the specialized cells with homogeneous protoplast. Both the ends have thickenings called polar nodules. Polar nodules are provided with minute pores. Heterocyst help to fix the atmospheric nitrogen compounds. In some species of Nostoc like N.commune heterocysts function as resting pores. The protoplasm of the heterocysts become functional and germinate to form a new filament.

5
Sparking during electroporation of plasmid DNA into bacterial cells
6
How does heat shock transformation work?
1
What did cyanobacteria gain from photosynthesis?
1
Do Archaea have membrane-bound organelles?
4
Cyanobacteria: Gram negative or Gram positive?
3
How do animals contain and dispose of bacterial endotoxins (lipopolysaccharides)?
2
How to attract Cyanobacteria?