Do ant colonies prioritize survival of particular members above others?

In some (perhaps small) human communities people may starve because they have no income. This could be interpreted as a consequence of them not participating in the community, hence they don't get any income and are left to their fate of starvation. Also, we can imagine that important members of the community are less likely to starve, as they are given priority treatment (e.g. a royal family will less likely starve to death during a given famine).

I couldn't find any information about ants starving in times of plenty, most likely since it's difficult to determine whether an ant colony is "letting" certain members starve or whether the ants have just died for whatever reason. To your second question, though, yes! This paper, The Effect of Colony Size and Starvation on Food Flow in the Fire Ant by Howard and Tschinkel, shows the effects of different lengths of starvation on the passing of radioactive food through different sized ant colonies. First, the queen:

Generally, queens received radioactive food earlier in starved colonies than in well-fed ones

Starved foraging ants distributed food more quickly than forager ants who had not been starved: 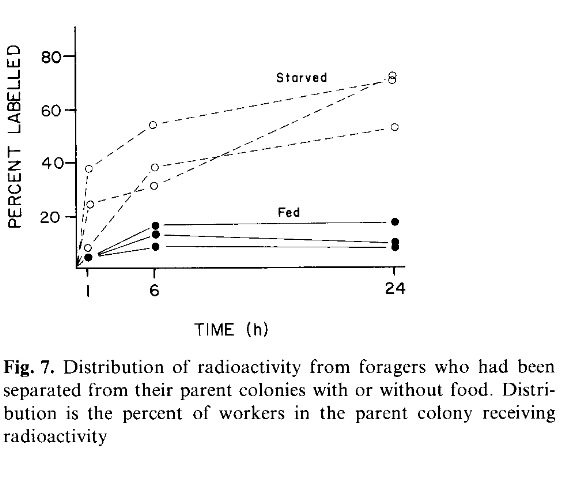 2
Can ant colonies have two "branches"?