Are there single-celled organisms that have evolved from multi-cellular ones?

I'm reading this paper about transmissible cancer cells in clams (Metzger et al. 2015) and I was wondering if there are any single-cellular organisms that are around today that are suspected as having descended from a multicellular organism

My question is different from this question as I'm not asking about cancer specifically but rather single-celled organisms evolving from multicellular organisms in general.

I would consider HeLa cells to be an example of a unicellular eukaryotic organism that evolved from humans. It can survive independently and replicate within cell culture plates, but cannot survive in the wild, however. 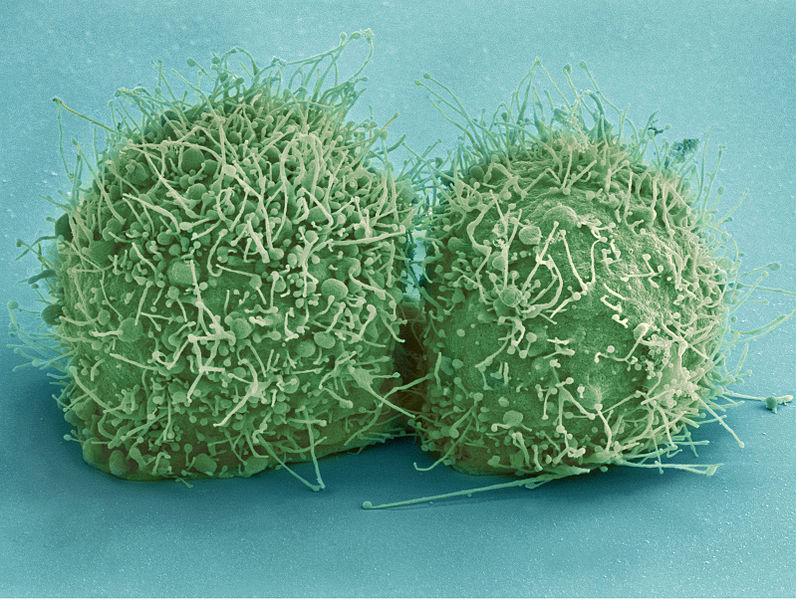 HeLa cells are, like in your example, cancer cells, in this specific case human cervical cancer cells. They were propagated as an immortal cell line, and completely match the replication characteristics of eukaryotic cell lines when propagated in the laboratory.

It can be even considered the case that HeLa cells are actually a kind of unicellular eukaryotic model organism not unlike S. cerevisiae, since they are widely used in experiments involving human-like cells.

As WYSIWYG has said in the comments, some biologists have even assigned the binomial name Helacyton gartleri to the cells (albeit with some controversy).

Inspired by the answer by @MarchHo, I came to think of the contagious cancer that attacks Tasmanian Devils - Devil facial tumour disease - which should provide a very similar example to the clams in your question. I don't think it has been given a species name though, but for most purposes it functions as an independent species. This "organism" lives as a parasite on Tasmanian devils, but has originated from a cancer tumour in an individual Tasmanian devil. You could maybe argue that it is not single-celled, since it develops into tumours, but it most likely spreads as single cells and I suspect that the cells functions as independent entities. However, I don't know enought about the disease to really say if e.g. cells in the tumours differentiate into different types. The cancer is spread by bites, and only affects Tasmanian devils (see http://www.tassiedevil.com: The Disease). This disease is apparently one of only three known cases of contagious cancers (also in dogs and hamsters), but this is maybe 4 now if the clams are a similar case).

Not the answer you're looking for? Browse other questions tagged evolution microbiology or ask your own question.

13
Could cancer be in itself a evolutionary process?

23
Are single-celled organisms capable of learning?
3
Evolutionary Cell Structuring
22
Why would a single celled organism evolve to be multi-celled?
9
What were the first neural systems like?
5
How do single-celled predators chase other cells?
4
Is there a theoretical maximum on the number of sexes a given species can have?