What determines the spiral direction of plants?

Some plants and vines spiral clockwise as they go along (right direction) and some spiral anticlockwise (left direction). What determines which direction they spiral along? At first, I believed it to be determined by which hemisphere you are in (influenced by the Coriolis Effect), and this result could be tested by finding spirals in both northern and southern hemispheres and comparing their directions. However, the very first spiral I found seemed to cripple that idea. 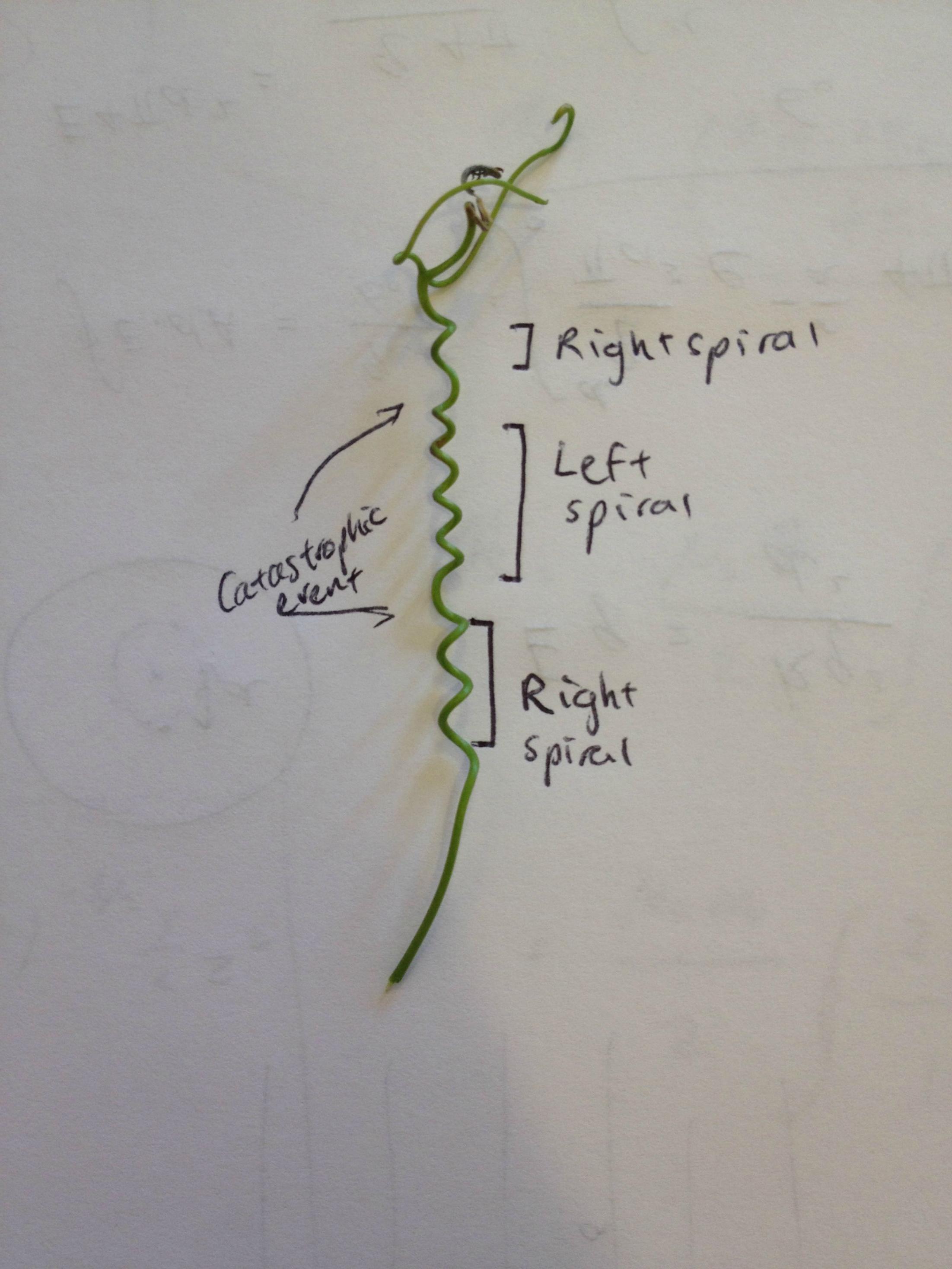 1: Arbitrary. The spiral seeks merely to latch onto something, and will try both directions to see if either work out.

2: The spiral is somehow influenced by the night day cycles. Since the spiral switches from right to left back to right having been subjected to two sudden changes, the only large changes I can think of is the day night cycle.

-I live in Australia by the way

First of all, you assumption seems to be incorrect. Plants in same part of the world can twine in opposite directions.

Little seems to be known exactly. Gravity has nothing to do with plant's chirality (or "handedness") or spiraling:

How plants do this is still unknown. Darwin proposed that it was "autonomously induced." This came to be known as the internal oscillator theory. In the 1960's the gravitropic overshoot theory explained mathematically how circumnutation could spontaneously occur as a result of forces related to gravity and growth. Recent experiments on the Space Shuttle have demonstrated that gravity is not necessary for circumnutation.

Here is another link to a blog, but it does contain reference to original paper on observation of chirality. Main conclusion, taken from the abstract, is:

The predominance of right-handed helical growth in climbing plants cannot be explained by hypotheses attempting to link plant growth behaviour and global location. One alternative hypothesis for our findings is that the widespread phenomenon of anticlockwise twining arises as a function of microtubule orientation operating at a subcellular level.

To elaborate a little on that, remember that actin filaments as well as microtubules are all chiral polymers. That is, they form spiral structures with defined orientation. Even more, microtubules all start roughly from the nucleus away to membrane, so this might suggest cellular mechanism for preference toward twining chirality. However, this does not address your observation that given plant changes direction of growth twice.

Having had a self-sown pumpkin grow in my back yard I can tell you what happened with the tendril in your picture.

The tendril started growing straight, with a couple of branches. When one of the tendril branches touched something (looks like the middle one in your picture), the tip began to curl as it grew, in order to latch onto it. Shortly after, the previously straight section of tendril began to contract, and in the process, to curl.

Curling helps the contraction process hugely. For each rotation in one direction, another part of the tendril has to curl the other way, since both ends are now firmly attached to something (the ground and whatever the end touched). Note that going from the bottom, the tendril curls three times one way (labelled right), five times the other way (labelled left) then twice the first way again (labelled right). There are a total of five rotations in both directions.

It would be interesting to see if every tendril starts curling the same direction as every other one, so maybe you can check a few different ones to see if this is the case.

The entire process is touch sensitive. The tips of the tendril will grow in the direction of what they are touching, so I would guess that the chirality would be random, depending on the particulars of how the tendril was touching the other object. I have, however, seen the tips grow back on themselves, causing one layer in one direction and another layer on top in the other direction, so it seems environmental, not predetermined.

Here is a link to a time lapse film showing the process in motion.

tendril coiling occurs via asymmetric contraction of an internal fiber ribbon of specialized cells. Under tension, both extracted fiber ribbons and old tendrils exhibit twistless overwinding rather than unwinding, with an initially soft response followed by strong strain-stiffening at large extensions.

PS: I was searching for an explanation to the twisting, and came across the above article before this one. What a wonderful world that we all observed this phenomenon, and that our curiosity was excited by the observation. Thank you for the article.

So, this discussion began several years ago now. I recently decided to grow up, more than out, to conserve space. So, I've tried climbers more. When I had several different plants growing, I noticed they all climbed clockwise.

If the original author still lives in Australia, I propose an experiment.

I live in the Northern Hemisphere, just outside Vancouver, Canada. Australia and Canada have differing growing seasons. If we were to exchange seeds and observe the same seeds, from the same packages, and document their growth, it would rule out hemispheric affects.

The best reading for the topic is "a comparison of chirality patterns of climbing plants in Peru and Brazil" from "assymetry in plants" which sais that:

The mechanical or physiological basis for dextral versus sinistral orientation of circumnutation among apically twining plants has not been determined, despite several papers on the topic in recent years ((Thitamadee et al. 2002, Kitazawa et al. 2005, Goriely and Neukirch 2006, Edwards et al. 2007, Mugnai et al. 2007, Edwards and Moles 2009, Isnard and Silk 2009, Stolarz 2009 Bastien and Meroz 2016, Smyth 2016). The majority of the data supporting a general hypothesis that twining is caused by microfibril orientation and their overlying microtubules is based on research on the roots and seedlings of mutant forms of Arabidopsis thaliana ...

Chapter 12 states that 80% of plants in brazil from 20 species have the same winding chirality.

I have been told that the direction of twist should be clockwise as long as the growth is vertical. This would mean the tendrils going out horizontal could go either way but the twisting vines should be prodominately clockwise as they grow upward. Googling pictures of American Bittersweet vines provides a good example of this.

Tendrils that have twists in both directions are better suited to holding up under tension as they tend to be able to just untwist without kinking when pulled on. You might see this occur during high winds for example. What I am suggesting is that tendrils may be a special case as they have a unique fuction and often a non-vertical orientation.

8
What chemicals and structures control the *direction* of plant growth in leaves, stems and roots?
5
What determines the autumn leaf color?
9
What could cause spiral tree growth?
1
Why does spiral or annular thickening occur in water conducting plant vessels?
2
How do plants maintain air spaces in leaves?
6
What determines when twining plants twine?
3
What types of plants are Gibberellin used on?
2
Negative Phototropism In Plants