When sorting cell populations it is possible to use either magnetic-activated cell sorting or fluorescence-activated cell-sorting (FACS). I am wondering when you would choose either technique and what the pro's and con's of each technique are.

As FACS sorts cells one by one, I can imagine magnetic-activated cell sorting is a faster process. So I guess if time is an important factor this could be used to base your decision on. Also by sorting cells one at a time I assume FACS is a lot more precise, and will lead to less 'contamination'.

So, are there other factors at play here that can influence the choice of magnetic-activated cell sorting over FACS, and what are the pro's and con's of these techniques respectively?

Magnetic-activated cell sorting (PDF download), or MACS, is a procedure developed by Miltenyi Biotec to separate cells from complex mixtures using antibody-coated magnetic nanoparticles. The antibodies are specific for certain cell surface markers, either expressed on your population of interest (positive selection), or expressed on undesired cell types (negative selection). After adding the antibody-coated beads to the cell mixture and incubating, the suspension is added to a special single-use separation column affixed to a magnet, to which the beads stick, while unlabeled cells flow through. If performing a negative selection, the flow-through is your population of interest and the bound beads and cells are discarded. If your cells of interest are bound to the beads (positive selection), the column is washed several times to make sure unbound or weakly-bound cells are washed through, then the column is removed from the magnet and the cell-bead complexes are eluted.

In fluorescence-activated cell sorting or FACS, the initial complex cell mixture is first labeled with one or more cell surface marker-specific antibodies that have been conjugated to fluorescent dyes. Cells can also be analyzed that express one or more recombinant fluorescent proteins in conjunction with a gene of interest, allowing for selection of cells without using antibodies. After incubation and wash steps, red blood cells are lysed, if analyzing whole blood. The reason for RBC lysis is shown below: 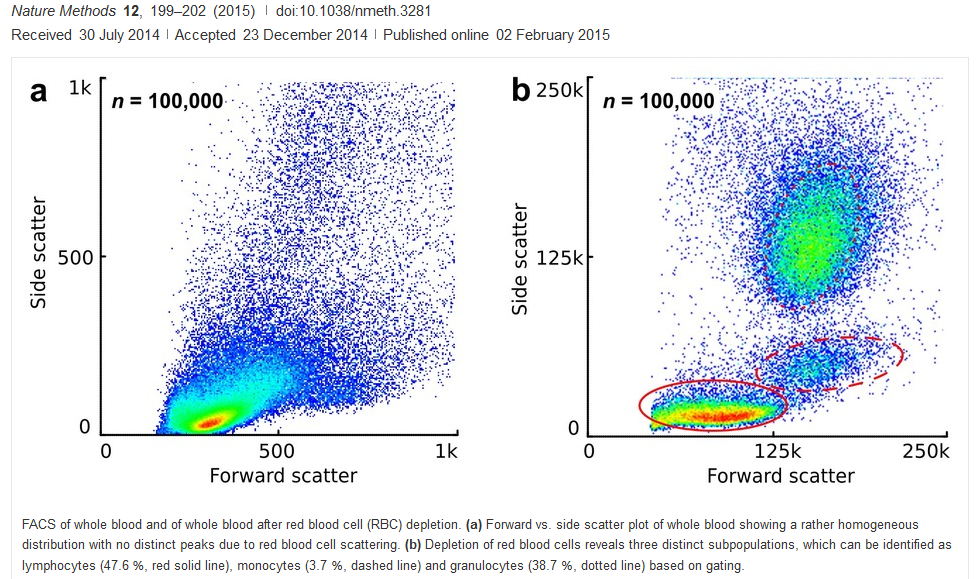 Without lysis, the RBCs overwhelm the cytometer, as they make up around 95% of the cells in human whole blood. White blood cells (leukocytes), on the other hand, only make up 0.1-0.2% of cells, and lymphocytes between about 15 to 50% of leukocytes.

The cell mixture is then analyzed on a cell sorter such as a BD FACSAria. 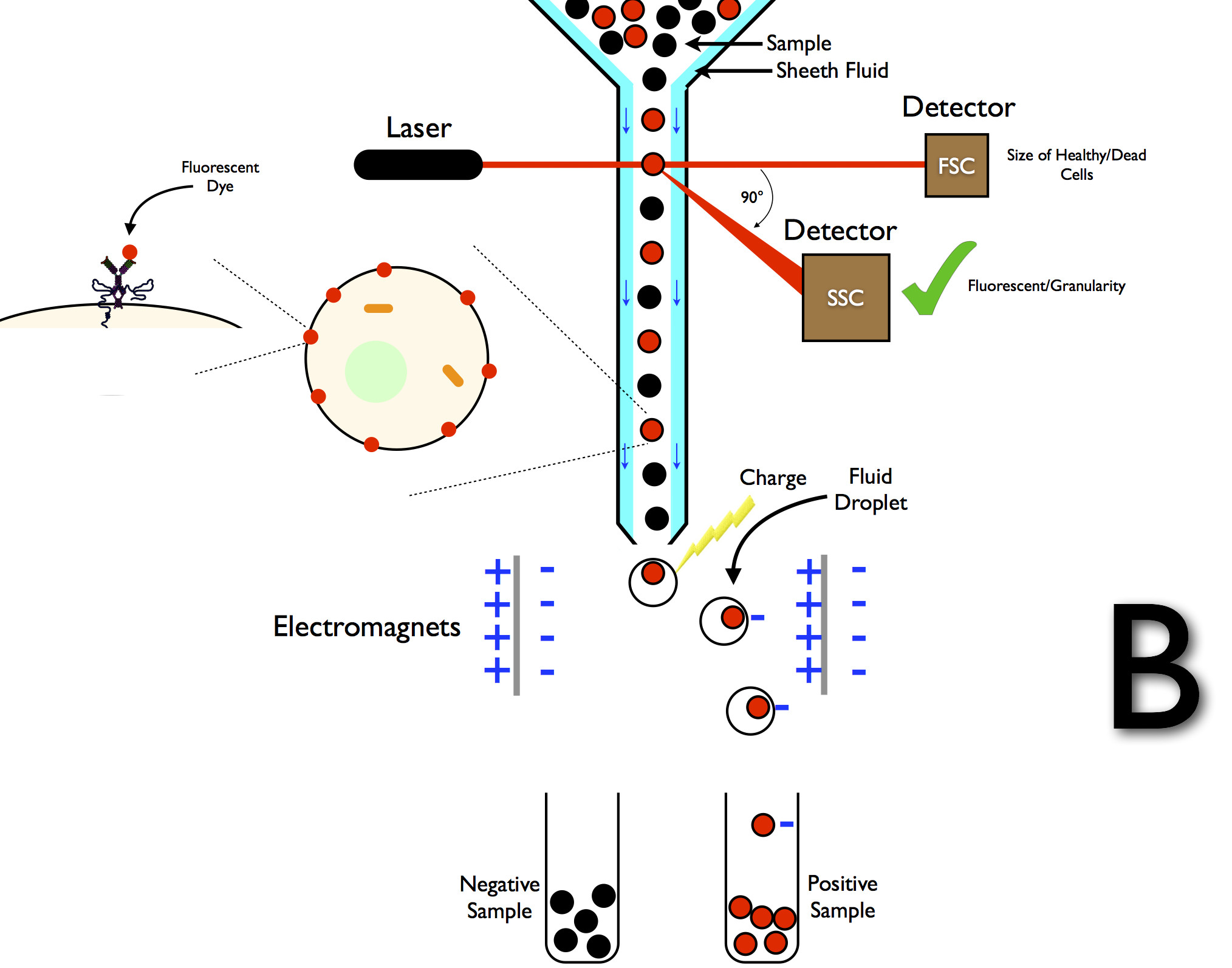 The cells pass in single file past one or more laser beams, which excite the dyes and cause them to fluoresce at a certain wavelength. The user can then use gating to select the combination and intensity of colors they are interested in, and when a cell meets the criteria, it is given an electrical charge, and electro magnets direct it into a collection container.

So what are the pros and cons of each technology? MACS separation generally is quicker than FACS staining, and a greater number of cells can be processed at one time (sometimes orders of magnitude more, depending on instrument and protocol). If you are, for example, looking to purify large numbers of CD4+ T cells from whole blood, MACS may be the better choice of the two (although I prefer the RosetteSep system for that particular requirement). MACS doesn't require a rather expensive dedicated instrument, although automatic platforms are available if needed. On the downside, most MACS-qualified beads are mostly only available from Miltenyi, so if they do not have beads with your particular marker of interest available, you will need to do the conjugation yourself, at the expense of time and possibly precious antibody while you optimize conditions. Fluorescent-conjugated antibodies are extremely common, and available from practically innumerable companies, so unless you are working with a self-generated antibody it's much more likely that you'll be able to find one for FACS quite easily. There are MACS beads that contain antibodies directed at certain fluorophores, so you can use flow antibodies for MACS, although optimization is likely still necessary. Finally, MACS separation is only an option for cells that have your marker of interest expressed on the cell surface.

One of the major advantages of FACS is multicolor staining (depending on the instrument you're using). This makes it much more straightforward to purify potentially rare populations that are only differentiated by their combined expression of a number of surface markers, necessitating multiple gating steps. If this were to be accomplished by MACS, you would need to go through multiple rounds of purification, something that could take longer than FACS, and not necessarily be feasible, as a certain number of cells are required for each MACS run. With FACS, these rare populations (which may only be tens or hundreds of cells per million) can be collected just as easily as more common ones. Also, as mentioned above, there are more antibodies available for flow/FACS than for direct MACS. Additionally, FACS allows for sorting of cells expressing GFP and relatives, letting you collect populations based on internal markers.

Not the answer you're looking for? Browse other questions tagged immunology lab-techniques flow-cytometry cell-sorting or ask your own question.

5
What is immunopanning (vs. immunoprecipitation and FACS)?
2
Staining cells for FACS at 4 degrees or ambient temperature
0
Is it possible to sort droplets inside an oil phase with a FACS
1
How are single cells sorted in an scRNA-Seq protocol by FACS?