Did cats evolve from monkeys ? or vice versa?

Did cats evolve from monkeys? or vice versa?

Most monkeys climb in trees and there are other similarities but I could not find any evidence on the internet.

Cats and monkeys have a common ancestor, both are placental mammals, so at the very least they must have both evolved from the first placental mammal. Cats are members of the Laurasiatheria group and primates are members of Euarchontoglires. These groups of mammals probably split off from each other about 100 millionish years ago. For more information about mammalian phylogeny, look here.

"Evolving from another species" versus "Most Recent Common Ancestor (MRCA)"

However, one can say from any pair of species (Eventual exception with viruses but don't pay attention to them now) that they have a common ancestor. Again, it is not only true for cats and chimpanzees but also for yeasts and ants or for chestnut trees and reticulated pythons. The interesting question is always, "when did the MRCA live?" or if you prefer "when was the time when the lineage that will one day yield to cat and chimpanzee was living?"

Yes! All life on earth shares a common ancestor. The question of interest is when did the Most Recent Common Ancestor lived between cats and monkeys lived?

Please consider having a quick look to this post for an introduction to phylogenetics.

How do we know that?

@user137 already linked to an article that shows when the most common ancestor of cats and chimpanzee has lived. If you want, you can learn more about how such inferences can be made. As you like mathematics (I read from your profile), you might be not too scared (although it will take some time) of statistics and algorithmic to have a look at those Wikipedia articles:

To understand the stats, you may need first to follow a stats course, such as this one from Khan Academy but again it will take some time. Of course, aside from the multitude of tools that one can use to infer time to MRCA from genetic data, one can also make an inference from phenotypic comparison although this method is generally much less accurate.

Before answering the question; I need to become clear about the concept of common ancestry.

All groups of organisms seem to have only 1 common ancestor (earliest ancestor of all life-forms on Earth), as generally accepted.

While discussing about evolution; when people frequently talk about "common ancestry";

firstly, they talk about latest common ancestry. If we pick any 2 species without any basis (for-say a pea plant and a dog); and try to search back their latest common-ancestor; there should exist some-or-some life-form (usually extinct, commonly hypothetical).

secondly; that latest common ancestry too; would must 'exist' between any 2 randomly chosen life-forms. Latest common ancestry is of not much use if we think it in a present-or-absent way. It only makes sense when we use it in a quantitative way ("how much common or distant") within 1 particular lineage-of-interest. 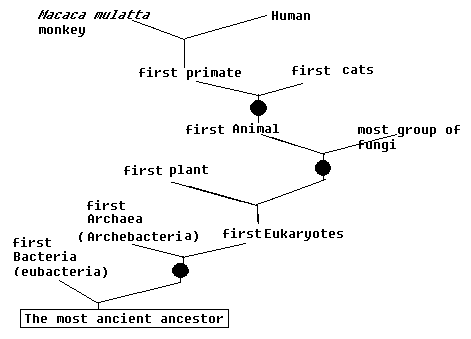 (* drawn on basis of this, this and this)

An answer to your main question(s);

Here is a diagram from http://genomewiki.ucsc.edu/ (slightly modified by marking the cat and monkey)

Still, we can argue that, at the branching-point, out of 2 evolving groups, only one evolving group could have shown alteration and another group was just unaltered parent group, like this;

Still, we could not apply that for cat and monkey; because if we consider one of the 2 branches after red circle at fig. 2 (for argument say it is on cat's side) exact same as parental-species; we could not say "monkeys had arrived from the cat". That ancestor could neither be considered as a cat or cow or horse etc.

Yes, we have mainly 2 tools to recognize common ancestry...

A. similarity (including macroscopic through biochemical to molecular-genetic);

And yes, establishing common ancestry from similarity, is difficult, because there are lots of exceptions caused by 'convergent evolution'. But still, there is a strong correlation between similarity and closeness of ancestry; and it needs our discretion about which one similarity could be really due to same origin, or which one is due to convergent evolution or due to just a superficial similarity or coincidence.

Not the answer you're looking for? Browse other questions tagged evolution genetics zoology phylogenetics or ask your own question.

32
Is evolution a fact?
4
Why do the ancestors of birds still exist?

5
What is the most recent well-attested common ancestor of chimpanzees and humans?
2
Did modern alligators and caimans come from prehistoric crocodiles?
1
Did we evolve from monkeys?
1
Endogenous retroviral insertions as evidence for evolutionary relationships among primates
2
Cross-species infections
1
Adaptive radiation vs divergent evolution
3
What did (domestic) cats evolve from?