As @Corvus pointed out, if we include changes in inclusive fitness that result from the action of your neighbor, we will double-count benefits. Consider the example mentioned above once again of a population of two altruists with a coefficient of relatedness $r$: 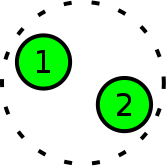 You can either consider the impact of the phenotype of a focus individual to neighbour individuals or the impact of neighbour individuals to the focus individual. Looking at it both ways, would yield to count the effect of your phenotype on twice. It doesn't make much sense to talk about the mean inclusive fitness of a population. You can only talk about the mean fitness of a population.

The reason for all these confusion boils down to what $B$ and $C$ really mean. One of the issue is that you confuse $B$ and $b$, $C$ and $c$. The formulation $rB>C$ is a oversimplification of the reality. Hamilton did not use this formulation at first and interpreting $b$ as the benefit for the carrier might be misleading. It is important to understand Hamilton's rule in its original formulation and it is important to understand the evolutionary game theory that underlies the evolution of social traits.

What is Hamilton's rule

Let's assume we are playing prisoner's dilemna. The fitness of an individual which cooperate is by definition $w_o + b - c$ (note the letters are not capitalized). If you cooperate and the other don't, your fitness is $w_o - c$. If you don't cooperate and the other does cooperate, you fitness is $w_o + b$. If nobody cooperates, your fitness if $w_o$. And by definition , $b>c$. Knowing the frequency of people that cooperate in the population $y$ and knowing and your probability of cooperating is $x$. Then, the level of altruism (frequency of cooperations) increases in the population if and only if

The mean fitness of the population therefore depends on the frequency of cooperation $y$. Let's assume for simplicity that $y=1$ (equilibrium), then the mean fitness of the population is $w_o + b - c$ (note that the letters, $b$ and $c$ are not capital letter), and the variance in fitness is null. All individuals has a fitness of $w_o + b -c$ as all individuals are altruistic and perform action that has a negative impact on the fitness $-c$ and a positive impact on their fitness $b$.

$b$ and $c$ in your question, correspond to $b$ and $c$ in my answer and not to $B$ and $C$. If you're playing prisoner's dilemna, then by definition, if everybody cooperate (no variance in the population), then everybody has a fitness of $w_o + b - c$ and the mean fitness is $w_0 + b - c$ (as there is no variance). Now the question of whether everybody ends up cooperating depends on $B$, $C$ and $R$.

9
How does "be altruist to those who are similar to you" evolve?
7
Help with the Price equation
7
Hamilton's derivation of direct fitness from his 1970 paper
7
Hamilton's inclusive fitness approach
2
How to compute the regression of individual fitness on individual phenotype
3
Is there any kind of "unintended consequence" in evolutionary systems?
2
What is this passage trying to say about Darwin's difficulty in explaining variation?