Why are 2 electrons transported from photosystem II at the same time?

I only know that electrons are captured by the primary electron acceptor and then go through the electron transport chain, ultimately ending up at photosystem I. But why do 2 leave photosystem II in the first place? I thought the oxygen-evolving complex only replenishes the electron hole one-by-one?

So refer to the following diagram, 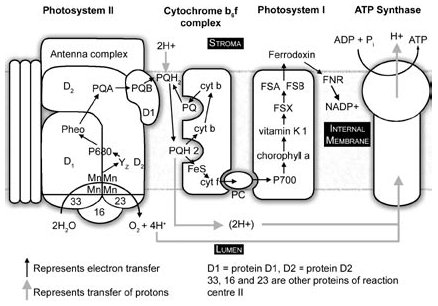 In the photosystem II complex, water is decomposed into oxygen and protons. That's two electrons liberated from each water molecule. Plastoquinone accepts two protons from the stroma by coupling it to the two electrons it receives from the photosystem complex. In this manner, the protons are transported to the lumen, and the electrons are sent into the electron transport chain. So PQ binds in a QB site in the D1 protein, and it's not released until it's double reduced/protonated. Another PQ binds in it's place when PQH2 leaves the binding site. Source

Short answer: Two electrons are liberated in splitting water, and that mechanism feeds into asymmetric lumen/stroma H+ concentrations and movement of electrons through the ETC.

Not the answer you're looking for? Browse other questions tagged biochemistry photosynthesis or ask your own question.

3
Why is cyanide poisonous?
3
Confusion about Photosystem 2 with regards to lysis of water
0
Photosystem I and the ETC
4
Pyruvate as a final electron acceptor in the electron transport chain
2
Energy transfer from P680 to oxygen-evolving complex
7
Why only 6 water molecules are formed in the aerobic degradation of glucose?
2
As electrons are moving through the ETC, how is ATP produced for the active transport to even happen?