Biological origin of shuddering during sleep

What is the biological origin of the following behavior:

Sometimes, during the early, formative phase of sleep (when you have a gradually dimming consciousness of what all is happening around), you feel some kind of a tremor of sorts - a feeling as if you are about to fall off. The body responds by twitching the limbs, so as to "balance", and you end up waking up for a second or two, where you realize that you aren't about to fall and all is fine.

Since Cerebellum is involved with maintaining equilibrium and balance, I have the intuition that this is related to some transient behavior where the Cerebellum is dimming down. When you are in deep sleep, you do not have a sense of balance, so I guess Cerebellum does dim down the sense of equilibrium.

But the apparent flaw in my reasoning is - if this was indeed the origin, one would have experienced these tremors every time one slept. That doesn't happen, it is only occasional (AFAIK).

So, biologically, what is the true origin of this behavior?

These are called hypnic jerks, also known as hypnagogic jerks or sleep starts. They are normal part of the wake-to-sleep transition. Hypic jerks consist of non-periodic myoclonic movements, generally involving an isolated limb.

The exact physiologic origin of hypic jerks is unknown. We can say that they correlate with a particular waveform on the EEG known as a K-complex: 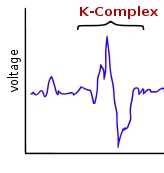 K-complexes are a normal part of Stage II sleep and can evoked using auditory stimuli, even if sleep is not interrupted. In the case of hypnic jerks, the K-complex is usually followed by alpha (wake) activity. To my knowledge, there is no evidence that hypnic jerks originate in or are routed through the cerebellum. K-complexes themselves are related to cross-talk between the cortex and the thalamus, a circuit that doesn’t involve the cerebellum.

In addition to the EEG findings, it has also been shown that the jerks are accompanied by autonomic activation — transiently increased heart rate and respiratory rate. There is also an (unexplained) subjective aspect. You described it as feeling "as if you are about to fall off,” which seems to be consistent with the published literature on this. As mentioned in the review cited below, some people report a sensation of "falling into the void.”1

The clinical implications, in case you were wondering, are summarized well by Vertugno et al.:

Sleep starts are common physiological phenomenon affecting up to 70% of the adult population and their course is benign, resolving without any neurological sequel. Therefore, reassurance and counselling are all that is needed to treat the patient. Though an adequate explanation and reassurance may be sufficient, some patients may require a small dose of clonazepam (0.5–1 mg at bedtime) to ameliorate the symptoms on a short-term basis.

You requested in a comment a reference to introductory material on the topic. What we know about the neuro-physiology of sleep is mostly based on the analysis of EEG (brain-wave) tracings. I therefore refer you to this introduction to sleep polysomnography if you would like to get a better handle on how scientists think about sleep.

12
How are our senses dimmed during sleep?
2
Can cerebrospinal fluid deliver nutrients/drugs to neurons during sleep?
1
What factors affect the likelihood of auditory stimuli causing arousal during sleep?
3
Involuntary twitches and apnoea during early phases of sleep
3
Is the immune system suppressed during sleep?
5
Do deaf people sleep better?
5
What in the brain has gone awry during sleep paralysis?
0
Breathing with Clogged Nose during Sleep