How is the "fine mapping of pelvic regulatory region" done in this paper?

Could anyone please explain to be in very basic terms how Fig 2, and the associated text(located above the figure) is done? The jargon is too much for me to understand and I really need a simplified, step by step, version of the process to aid my understanding.

Here is a copy and paste of the text, the figure, and the figure description in that order from the paper:

"Fine mapping of pelvic regulatory region. To further localize the position of the cis-acting changes, we looked for the smallest chromosome region co-segregating with bilateral absence of pelvic structures in a cross between pelvic-complete [Japanese marine (JAMA) and pelvic-reduced (PAXB) fish (13)]. High-resolution mapping identified a 124-kb minimal interval, containing only the Pitx1 and Histone 2A (H2AFY) genes, which showed perfect concordance between PAXB alleles and absence of the pelvis (fig. S1A).

Recombination in natural populations can also be used to narrow the size of regions controlling polymorphic traits in sticklebacks (18). We therefore tested whether markers in the Pitx1 region were associated with the presence or absence of pelvic structures in lakes with dimorphic stickleback forms: benthic and limnetic sticklebacks from Paxton Lake, British Columbia (PAXB/PAXL), and pelvic-complete and pelvic-reduced sticklebacks from Wallace Lake, Alaska (WALR/WALC) (fig. S2) (13, 14). Microsatellite markers located in an intergenic region approximately 30 kb upstream of Pitx1 showed highly significant allele frequency differences in fish with contrasting pelvic phenoytpes (P < 10−35) (Fig. S1B and table S2). In contrast, markers around thePitx1 and H2AFY coding regions showed little or no differentiation above background levels. These results suggest that an approximately 23-kb intergenic region upstream of Pitx1 controls pelvic development. This region is conserved among zebrafish and other teleosts (Fig. 2A), suggesting that it may contain ancestrally conserved regulatory enhancers." 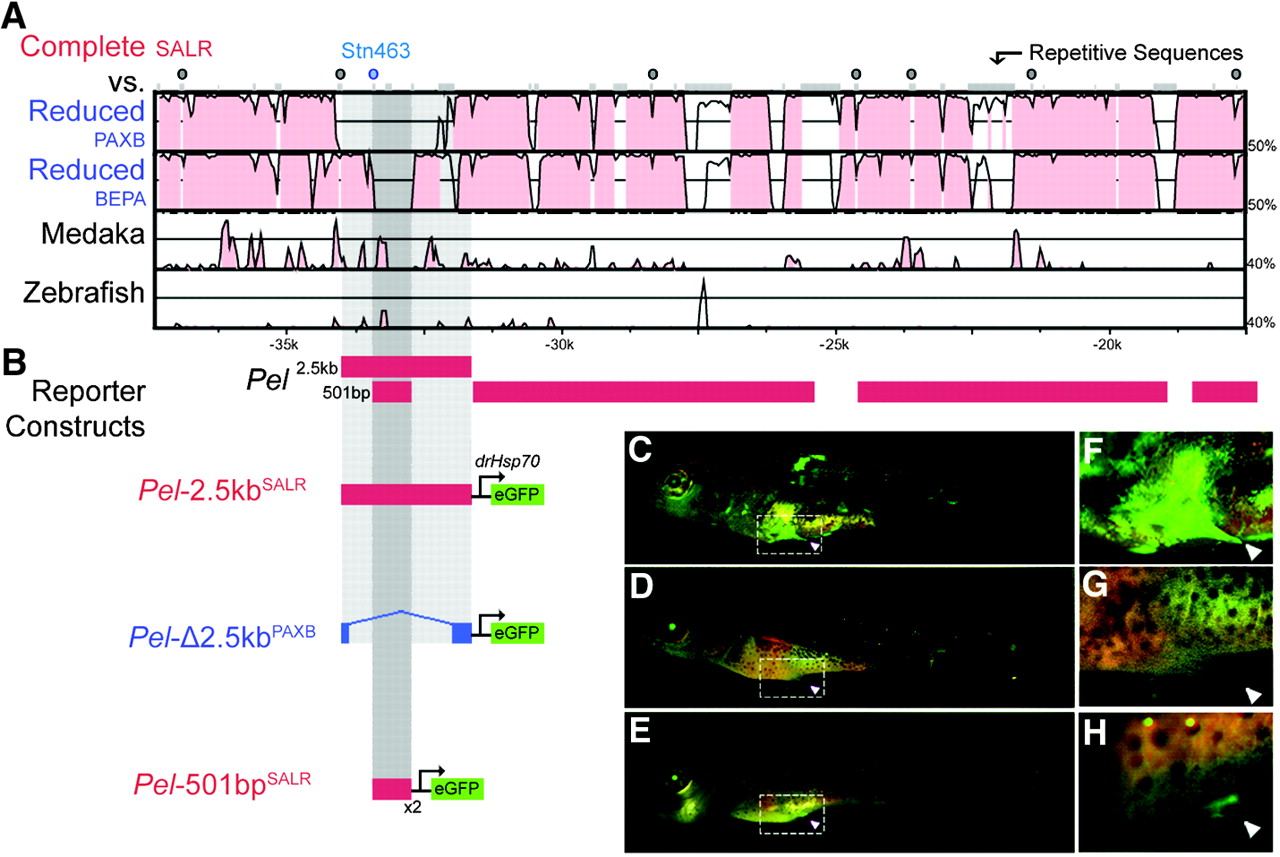 This is conceptually similar to our discussion about QTLs, except that I believe that in this example the authors had already narrowed down (which means crudely mapped, as opposed to finely mapped) the actual genetic region by some previous experiments.

Based on that prior work they may have already deduced that they were seeking a single gene (or a Mendelian factor). Note that this is different than a QTL. QTLs are used when the phenotype of interest is polygenic, and cannot be mapped to just one single Mendelian locus.

The other important thing to realize is that the genetic map (derived from meiotic recombination between genetic markers), is an abstract concept, and on its own cannot be aligned to the physical map. The physical map is built by either creating a DNA library and making a restriction map of the clones to form contigs, or more likely by sequencing all of the clones in a library--or just using an NGS shotgun approach.

It is the RFLPs (the small DNA sequences that can be used as genetic markers) that tie, or pin, or link the physical map of DNA to the genetic map. Once this alignment has been achieved in the region of interest you just need to establish the left and right boundaries of your region of interest. That should yield one, or more, candidate genes. Rough mapping, or gross mapping, might narrow the genetic interval to a segment containing dozens, or scores of genes, while fine-mapping lets you zoom in to perhaps just a handful of genes.

So the authors do a cross between a wild-type and a mutant, and then figure out some way to homozygose the recombinant chromosomes (I am assuming that the phenotype is recessive). Then they do two things. For each recombinant chromosome the score the phenotype (in this case that involves an anatomical structure for the pelvis). Then they also isolate genomic DNA from those scored animals and use their RFLPs to establish the molecular markers that map genetically the closest to the segregating phenotype.

With both a genetic and a physical map in hand they can establish the left and right boundaries.

I'll try to help clarify the picture, but given that I have not read the paper, I am not too clear on the context.

A. IT compares the DNA of the stickleback (the SALR), medaka, and zebrafish. If there is a red peak, there is relatively high sequence identity (or similarity), indicating similarity (in evolutionary ancestry in this context?). Gray is repeating sequence, perhaps due to duplication or some kind of evolutionary history. For microsatellite markers, I believe that the paper is referring to the use of microsatellites (small tandem nucleotide repeats) as markers to compare the three.

B. Reporter genes are expressed and help the researcher identify something (by giving information, such as fluorescence etc.) (eGFP indicates green fluorescent protein e= enhanced)

Hope this helped! But you need to do the analysis yourself, or at least I can't :P

1
How does the MET gene work and what happens when the promoter region gets mutated?
0
What is the impact of selection on orthologous and paralogous genes? How would this impact differ in different regions of protein coding genes?